I picked up the first issue of the original miniseries The Strange Talent of Luther Strode from Justin and Tradd at New York Comic Con in 2011 by the suggestion of my friend Matt. He told me that the first issue was really good and I should get it, I was hesitant mostly because I didn’t want to put another comic on my pull list if I ended up liking it. So over the NYCC weekend we walked around and we saw Justin and Tradd signing at the Image booth. Matt went over and started talking to them, telling them that he liked the book and that he was trying to get me to try it out. Justin explained the premise of the book for me and I thought, why the hell not and decided to buy the first issue from them, they signed it. Later that day I was in the hotel room and I read the first issue and I fucking loved it. 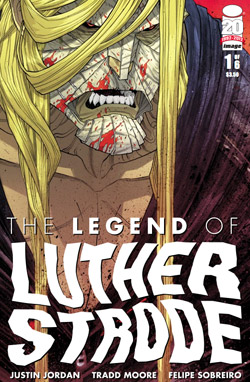 The overall plot of the comic is that this nerdy type kid sends away for exercise course from the back of a comic book called the Hercules Method. He uses this method and builds strength, muscles, speed, basically he gets powers. But as he develops these powers certain people try to take interest in him and it turns out that this method is part of something bigger and it starts messing with his life. If that sounds at all interesting to you then go and buy the first trade and read it. It’s a great book, with gorgeous art and beautiful colors. This issue that I’m reviewing is the first issue of the sequel to Strange Talent.

This issue picks up five years after the events of Strange Talent. Luther has been hard at work killing the men of one Mike Hill. As the issues begins we only ever seen Luther in the shadows or off panel. He’s a mystery and his reputation is that of Batman when he first started being Batman. People are skeptical if he’s real or not, if what he’s capable of is true, so there’s a legend building in Luther’s name, and the whole issue does a great job building this. Mike Hill, a young man who has just taken over his father’s ‘business,’ doesn’t like too much that his men are getting killed off and decides to put a plan into motion to kill him. The plan doesn’t work as Luther kills everyone that comes up against him but it turns out that killing him wasn’t the plan. They wanted to confirm Luther’s existence, they wanted to know the legend, what he’s actually capable of, which is why everything that happens in the warehouse they lead him to was recorded. Like I said before keeping Luther in the shadows and off panel was a great way to build his legend status in the issue, but when he finally appears on panel it’s a wide shot, or from behind, or with his hair in his face, we never get a clear look at his face and he never says a word. The issue ends with the return from someone from Luther’s past who has allied themselves with Mike Hill to take down Luther.

I loved they way the build up the legend of Luther in this comics, I thought it was really well done. I loved that in the beginning one of the criminals is Jesse Pinkman from Breaking Bad, that was just an awesome Easter egg. I will warn readers that this comic is violent, very fucking violent. It’s over the top gruesome but it’s a lot of fun. The story is great fun, and having read the first series I know it will have an emotional center at it, because there are issues from the first series that I’m sure will be brought up in this series that Luther will have to deal with. The art my Tradd Moore is fantastic. He’s a very skilled artist that does a fantastic job of putting Justin’s story on the page. It’s horrifying but he has such a unique style, one of the best artists that I’ve seen emerge in the last couple of years. Now all this would not be able to be called a whole package if not for Felipe and his colors. He brings a sense of atmosphere to the series. In Strange Talent the book was brighter because what was happening to Luther was new and nothing bad had happened to him yet. But in this everything is a little muted, a little dark, because that’s where the character is now. And I’m sure, if the first series is any indication we will be seeing a lot, a lot, a lot of red in the comic.

This comic was one that I was looking forward to since the end of the first series and so far it’s off to a great start. If you’ve read the first series then you’ll love this and if you haven’t this issue is a great jumping on point. Everything you need to know is in that first issue, but I would recommend going back and reading the first series because as the reveals come and we see more of the story it will make for a more emotional an engaging story. It’s weird but the as I finished reading this issue the first thought I had was “there will be blood” and I couldn’t be any happier.