Welcome to Antonio’s Top 5 Comics of the Week. It is an honor to have my column to be featured on the Comic Impact website, so thank you Simon and Sheldon. This column is pretty easy to figure out what it’s about. I will obviously be doing a top 5 countdown every week based on my stack of comics that I buy. I’ve been doing this since March of 2012 on my tumblr account ReadWatchedandSeen.tumblr.com and I enjoy doing it. With moving the column here to Comic Impact I hope to get more discussion going about comics and highlighting comics that I really like. So on tothis week’s top 5.

This issue is the final issue of the first arc of All New X-Men by Bendis and Immonen and it made some huge story changes for the future of the book and both the X-Men and Marvel Universe. Some of the big things that happened this issue, Jean Grey knows everything. This is kind of like the moment when Wolverine wakes up in House of M and he has his memories back, same thing happened to Jean Grey, she read Blue Beast’s mind and she learned everything that has happened to her and her X-Men team since they were pulled out of time, and she doesn’t seem too happy. Though one of my favorite moments was an exchange between her and Wolverine where she says “I know this is hard for you James.” and he tells her to stop talking. I loved that panel and the fact that she called him James. That leads to another big reveal, the X-Men of Old are staying, so this is a permanent thing people, at least for it’s going to be for awhile, so get used to it. It also leads to Kitty Pryde having a new role in this comic as being in charge of Old X-Men as a way to honor Professor Xavier. The last big change we get in the comic is that Blue beast gets a new mutation and new look. I’m glad he wasn’t killed off because I love how Bendis plays Blue Beast and Human Beast off each other, it’s funny, it would make the weirdest sitcom. Now as for the look, I like it, it will take some getting used to but I think it looks cool.

The best thing that Hickman has does is decide to continue in the tradition of what Bendis set up as the New Avengers title and decide to take another Bendis idea, the Illuminati and finally give us a proper book where we can follow the exploits of the smartest men of the Marvel Universe and see how they deal with protecting the world and dealing with the consequences of sins past, most recently Avengers vs. X-Men. The previously on page shows when the formation of the Illuminati happened, specifically showing that Black Panther didn’t want anything to do with the Illuminati. New first page is a short
monologue from Reed Richards that is very scientific in thought but still comes across very creepy and foreboding. The issue spends a lot of time on new villains that arrived to do some nasty business on Wakanda and the after match of their actions, which takes the lives of 3 Wakanda citizens. Black Panther thinks he only has one play left in his book and calls together the Illuminati, Reed Richards, Black Bolt, Dr. Strange, Tony Stark, Namor who he refers to as the devil himself, all lead by Captain America. This book has a lot of potential in the stories that it can tell and so far I think that it will tie in nicely to Hickman’s companion book Avengers. I’m pretty sure I see some similar designs in the villains. I have to add that the “badguys” in this book speaking Sumerian was fucking. 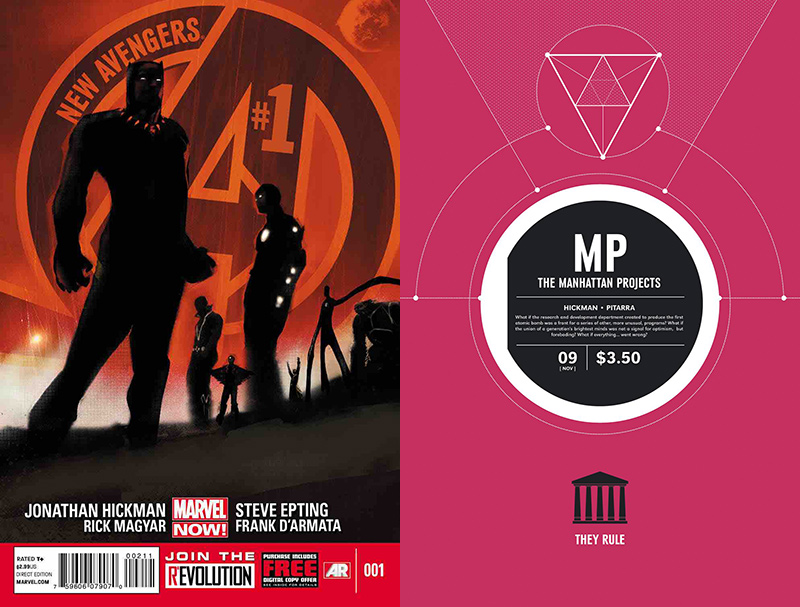 The Manhattan Projects #8 by Jonathan Hickman and Nick Pitarra [Image]
One week in to comic books for 2013 and Mr. Hickman has two books in the Top 5. This issue of Manhattan Projects was equally funny and bad ass. The group that opposes what scientists are doing decide to “Purge the system” and all hell breaks loose as robots try and take over Star City and the Orbital Station, Singularity. The story mostly follows Von Braun as he fights for his life against robots with the face of former President FDR. The comic is filled with great lines and funny moments. Van Braun flipping off a FDR Robot before killing it, Yuri Gagarin has a great line about being an explorer “I am an explorer comrade, and death is the final frontier”, to the continually bad luck of Helmutt Grottrup. When it comes to Helmutt I can’t help but feel really bad for this character because he tries to do the right things but he keeps getting fucked over, beat up, and kicked when he’s down but for some reason when the bad things happen to him, it’s never notfunny. I’ve said it before but he is the living embodiment of Alexander and the Terrible, Horrible, No Good, Very Bad Day yet he manages to survive everything that comes his way, to live another day where everything goes badly for him. Von Braun survives the attack but at a great cost to his body. I don’t remember if this is the first issue of the comic where the coloring wasn’t majorly red or blue but instead it is colored traditionally and it looks amazing.

Invincible #99 by Robert Kirkman and Ryan Ottley [Image]
For a comic that is about to release issue 100 next month taking the approach this comic took was pretty bold. I say that because it is the second to last part of The Death of Everyone arc which leads to the issue one hundred and though I know I’m not the writer, I figured there would be more story to tell before issue 100. That being said I really enjoyed this issue and I have to give it up to Ryan Ottley, Cliff Rathburn, and John Rauch on drawing, inking, and coloring every page of this book seeing as how each page was a splash page. Each page was very detailed and beautifully rendered with surprisingly a lot of story getting through even if most of the issue was a fight between Invincible and Dinosaurus. Dinosaurus is someone that Invincible has never beaten which will come into play by the end of the issue. I just want to say that I’ve been reading this comic since issue 1 and have always enjoyed it, Kirkman has always done a great job on this comic and I always love when he gets a little meta or self referential in his comics. The story line of the is called The Death of Everyone and the first line of the issue is from Dinosaurus where he says “This isn’t the death of everyone…just a significant portion of the population.” which to me is pretty funny. I am very much looking forward to reading issue 100 and seeing what happens and also what Kirkman is setting up for the future. 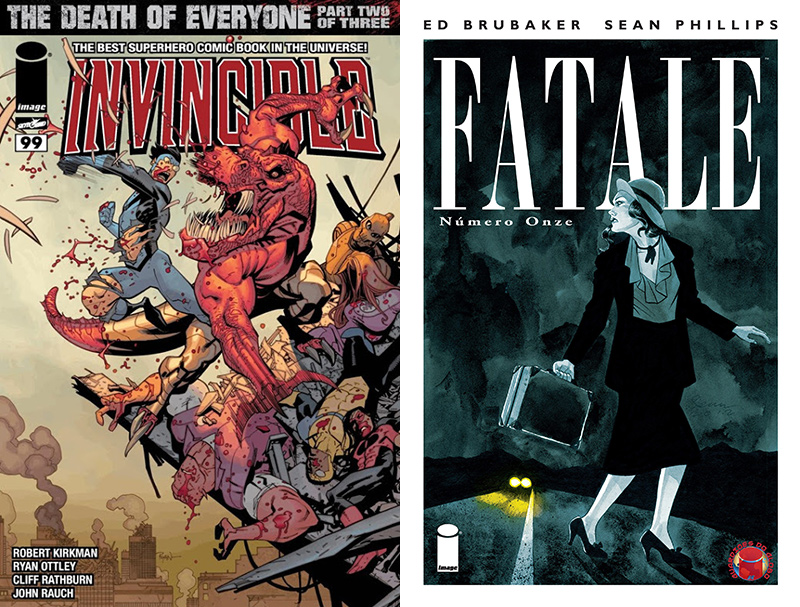 Fatale #11 by Ed Brubaker and Sean Phillips [Image]
I love pulp fiction and crime comics and some of my favorite ones have been written by Ed Brubaker and drawn by Sean Phillips. Obviously this comic book is no exception. This issue of Fatale really works as a starting point if you haven’t been reading the comic from the beginning, which I suggest you do. But reading this issue you are given a lot of information of Josephine and her lure or power over men, that she is being chased by some men, and something about an ancient book that is written in a strange language. The great thing about this book is that it mixes the crime aspects as well as horror elements really well that sometimes you don’t know what kind of comic you are reading.