Hey Comic Impact! Welcome to week 2 of Antonio’s Top 5 Comics of the week. It was a heavy week with a lot of comics, including a few number ones. If you don’t find some of your favorite comics on the list, tell me and I’ll be glad to discuss things with you or maybe I just didn’t read that particular comic. Anyway, on to the list! 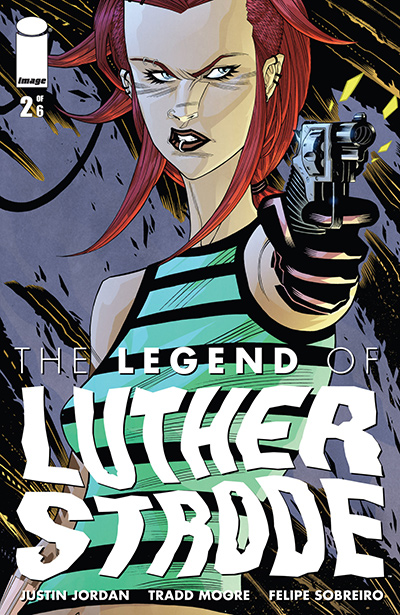 1. The Legend of Luther Strode #2 [of #6] by Justin Jordan, Tradd Moore, and Felipe Sobreiro [Image]
[SPOILERS] I was glad to see that the reveal on the last page of the first issue was a red herring of sorts. The reveal that Petra was going to help the bad guys get Luther was
completely justifiable because she went through some pretty horrific shit and she had to deal with it all alone but I’m glad that she went on the strike against Luther to warn him. Though she still has anger towards him and what went down in Strange Talent and his actions in the aftermath of it all. The one thing this comic showed for the character of Luther is that it’s been made pretty evident that he’s not the same person he was in the first series, and while in the first series he was trying to do the right thing for the people in his life, now that he doesn’t have them anymore he’s just going on killing sprees (of bad people) where he’ll be going up against small armies so that maybe they take him out and end up killing him, but that is easier said than done. Though that might change with the cliffhanger and we’ll have to see where the next issue takes us because the reveal at the end I wasn’t expecting and I should have, suffice enough to say that me and Petra hadthe same exact reaction.

2. Thor: God of Thunder #4 by Jason Aaron and Esad Ribic [Marvel]
The story that Jason Aaron decided to use as his opening arc for Thor is pretty ambitious. I say this because to launch a comic centered around one of the heroes from The Avengers and tell a story where you see three different versions might be a little too much for people to handle, and that’s understandable but at the same time that doesn’ bother me because I know that Jason Aaron knows how to write and he’s doing a fantastic job on Thor since he’s been on the book. This issue is the fourth part of the five part opening arc and as of now we have seen the three different versions of Thor talk about or be in direct conflict with the God Butcher. In discussing this with one of my friend he said he said he found it frustrating when Thor couldn’t remember some of this fights with the creature and how he defeated him, and I feel like there was some sort of answer in issue 3 where he talks about life and friends and family and what they mean to him in the life of an immortal. Well in this issue we get the answer to that and why Jason decided to use Thor from 3 different eras. It’s a neat twist and it made for one hell of a last page. 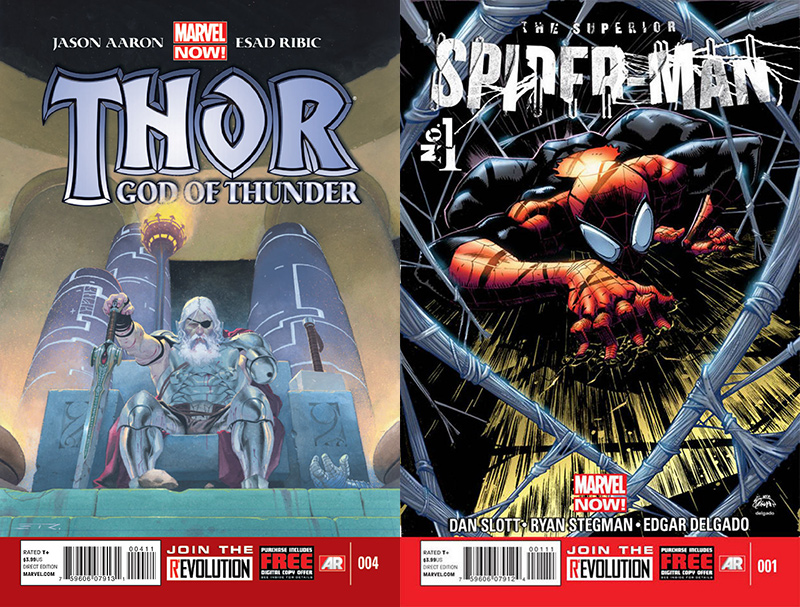 3. The Superior Spider-Man #1 by Dan Slott, Ryan Stegman, and Edgar Delgado [Marvel]
I hope everyone who hated Amazing Spider-Man #700 didn’t buy Superior Spider-Man #1 because you probably would have hated it and cried about it on the internet some
more. Now before I talk about this issue I want to say something, or more like ask a question. Do you really think that this is going to be something permanent? Do you think that Peter Parker has finally lost the war? Do you think that Marvel and Dan Slott would do something so drastic if they didn’t have a plan of some sort? Do you think that this was something they decided to run with as a story with no plans on the future of the character and his universe? If you think any of that and have been reading comics for a long time, then you don’t really understand comics. You’re allowed to be frustrated or angry, I get that, but for death threats to Dan Slott, you need to stop reading comics because to get pissed off to threaten someone with death over a comic then you’ve lost the point of what reading comics is about. Now onto the issue itself, I liked it a lot.

I thought it was funny and I like seeing the Doc Ock character come out and talk like himself through the Peter Parker body. I loved how he single handedly took down the new Sinister Six, which he was perturbed to see and insulted that these inferior Spider- Men villains would refer to themselves as the Sinister Six. His use of science and the pre planning he did to take them out was spectacular, and a bonus to the fact that he called the media to see all this happen. We are dealing with a different kind of Spider-Man here, which is obvious to us, but I do find it weird that other people don’t notice it, but at the same time, they are not privy to the same information we are so they wouldn’t be looking for it, also suspension of disbelief. But any way Doc Ock as Spider-Man can have it moments of humor but also anger and rage get the better of Doc Ock even when he’s winning, which is where Peter Parker comes in, as Ock is about to beat someone to death the will of Peter Parker is there to stop him and that’s the kicker, that’s the important thing to take away from this comic. Peter Parker is not gone, Peter Parker is still in his body, his will is there and though it may take some time for things to get back to normal we, as the reader, know that he will always be there to stop Doc Ock from doing the bad thing, but we also know that he’s, at least right now, strong enough to act in some way.

4. Avengers Arena #3 by Dennis Hopeless, Kev Walker, and Frank Martin [Marvel]
Avengers Arena is another comic at Marvel that is getting hated on, with a recent petition online going around asking for the comic to be cancelled and deleted from Marvel continuity. Well shit, if Marvel is getting all this hate from people all I can say is job well done, because the best thing that can happen to a comic is for people to see what all the hubbub is about by buying the comic and making sure that the comic will be continuing for some time to come. I am enjoying the hell out of this comic and I have said from the beginning, since before the first issue hit the stand, that there is more in play here than just Arcade’s fun and the murder of side characters in the Marvel Universe. Hell, even Dennis Hopeless has said there is more at play here, so people, it’s only been three issues, calm down and read the comic, give it a chance to see where it’s going and what the twist is going to be, this is all about timing and setting things up so that later down the line those things get paid off, you will rewarded as a reader for your patience.

I will say that this has been my favorite issue of the series so far and I have to kick myself for not remember Cammi from Annihilation. We get her origin in the issue and I loved it. I wasn’t a big fan of her character in Annihilation but it was great to see her here and what she has been up to since then, I especially loved the way she reacted when she saw Drax. Hopeless has turned me on Cammi and now I’m going to go back and read the first 2 issues again because Cammi was featured heavily in them. We also got to see how she was brought into the game, sort of, there’s still some questions to be answered, but it’s only the third issue. I also liked that there is something or someone stalking the characters out there building another mystery here and I’m curious to see where it goes. 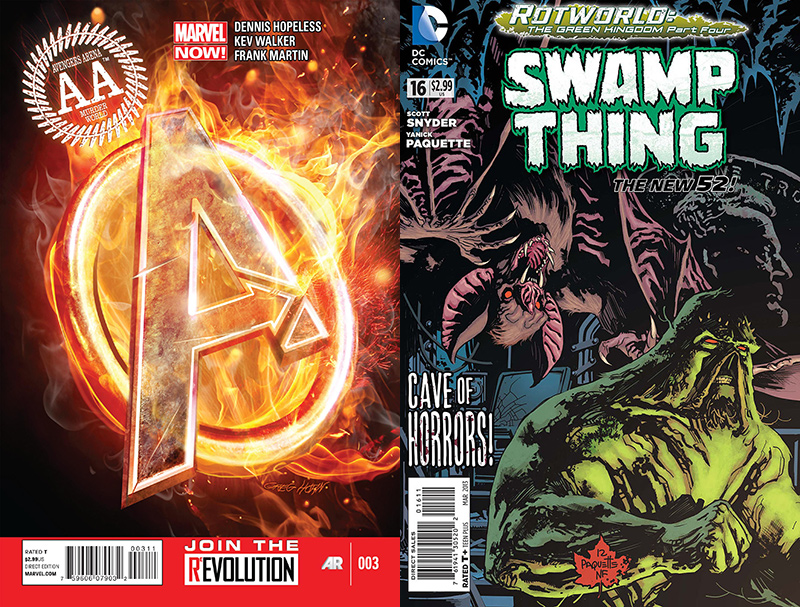 5. Swamp Thing #16 by Scott Snyder and Yanick Paquette [DC]
Scott Snyder is an amazing writer. That’s a fact. One of my favorite things about the way he writes is that all his stories are written with a literature frame of mind, almost poetic in the way he describes everything. To me that hasn’t been more apparent in Swamp Thing, though you could say he’s stepping that up in the Joker story he’s telling in Batman. Adding that poetic touch to Swamp Thing is a tell on the character himself because he comes across as a monster in appearance but everything that he has been doing in this Rotworld storyline has been for the love of his life and it doesn’t get more poetic than that. I have to mention that Snyder’s love for Batman is really evident in this comic because it’s pretty much Batman coming up with the idea that will save everyone he just had the misfortune of not being able to go through with it because he got infected by the Rot and not it is up to Swamp Thing to save the world. But to go back on the love topicfor abit, it has to be said that the force driving Swamp Thing to save the world is his love for Abby. Actually, the driving force for Animal Man to save the world in his half of Rotworld is the love of his family. I think it says a lot to the power of love that these two horror stories main characters are being motivated by love, not revenge, not hatred, and not anger, but love which is something we all share because we all have loved ones that drive us to do things that are out of our comfort zones because we don’t want to see our loved ones get hurt. Love is a much more powerful motivator than hate. I say that knowing how this issue ends and I say that not knowing what is going to happen to Alec
in the last issue of Rotworld.