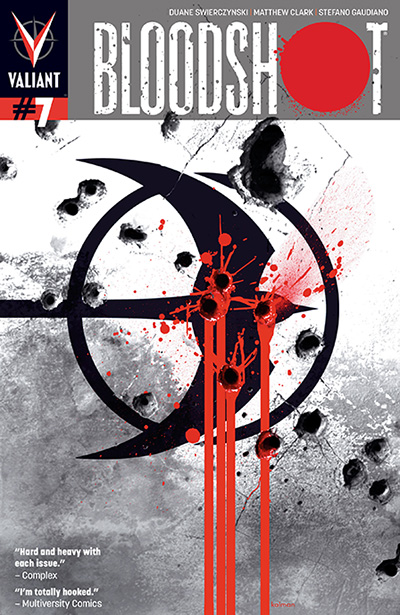 One of the biggest surprises of last year was Valiant comics and the most insane book coming out from the Valiant relaunch is Bloodshot by Duane Swierczynski with artwork by Matthew Clark.
Before I go on with this review I just want to say I am not a huge fan of action movies but Bloodshot feels like an EPIC 1980’s action movie. It is one of the books that I can’t wait to read every month. That is simply because Swierczynski knows how to write a character that you are intrigued by and at the same time praying that he doesn’t come after you. That’s why I think that as a writer, Swierczynski  is a perfect fit for a character like Bloodshot. Since the first issue our main character has been a secret and we don’t know anything about him but that all changes in the is issue as Swierczynski drops a few clues about where Bloodshot came from as well as a bit more about where the name “The Bogeyman” comes from.

In issue #7 we also find out what the government has in store for Bloodshot and it seems it is more of the same in his past because he is being told that his daughter is being held captive with other children. He has to go under cover for the shady government that he works for and that’s only the beginning of this story. BIG BROTHER is real in the Valiant universe and trusts me we find out more about them in this issue.

I don’t want to spoil this issue to much because if you have been thinking of reading this book THEN DO IT because this is a great lead into the upcoming ‘Harbinger Wars.’ Trust me that is the event you don’t want to miss out on this year.

One of the main stars of this book is artists Matthew Clark. His artwork is the perfect fit of violence and comic book acting especially in this issue.Bloodshot is not a character for everyone this is a very violent book and it might disturb some people but if you’re willing to take the ride then this book is for you so sit down, put your seat belt on and enjoy one of the most insane outrageous original books being published today. Let me tell you something “’Harbinger Wars” can’t get here soon enough so I highly recommend Bloodshot number seven as this was my favorite comic of the week for January 16, 2013! Bloodshot is a high-octane book that doesn’t stop. When you get to the last page you will be craving for more.