Hey Comic Impact! Welcome to week 5 of Antonio’s Top 5 Comics of the Week! With this column we close out the month of January with some really thought provoking comics and some really personal stories. 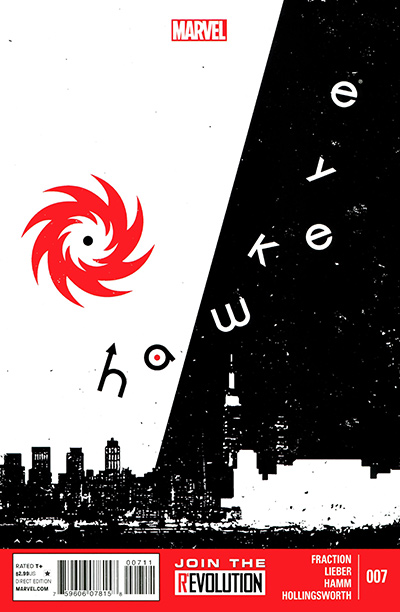 Hawkeye #7 by Matt Fraction, Steve Lieber, Jesse Hamm, and Matt Hollingsworth [Marvel]
Before I say anything about the issue itself, I have commend Matt Fraction, Marvel Comics, and the rest of the team on this issue for giving us some really great stories about people doing good during Hurricane Sandy, that hit New York and other palces last October, but also praise to Matt Fraction for donating his royalties from the profits of this book to the Red Cross. I have to say that the reason this issue means so much to me is because I can relate to it with more than just sympathy. I was in New York, on Long Island when the storm hit and the flooding happened. I was affected by this hurricane in a major way.

The storm flooded the library where I work, effectively taking away my job. The storm also took away the place that my father and I were renting, so that after the storm we would have to find a place to stay because we didn’t have heat, hot water, electricity. And a lot of people I know, a lot of them friends lost a lot more. Most people lost everything. I’m not living in New York right now, but I talk to my friends from back home everything is going back to normal slowly but surely, but a lot of them still aren’t back in their own houses, and some might lose them all together because of the hurricane damage from the previous year.

I saw the aftermath and it was terrible, but this comic gives me hope. It shines a light on something that people are still reeling over from the aftermath. There were two stories in the issue one that followed Clint and one that followed Kate. They were both about doing everything they could to help people that were in trouble. The art was amazingly drawn by both Steve Lieber and Jesse Hamm and the colors by Matt Hollingsworth were spectacular, staying with the palate that has been establishing through the series it actually made for a perfect depiction of the night the hurricane hit. One again, thank you to the creative team and to Marvel.

Nowhere Men #3 by Eric Stephenson, Nate Bellegarde, and Jordie Bellaire [Image]
Nowhere Men is very fast becoming one of my favorite titles to read every month. It’s a very ambitious book that will require many rereads which I look forward to doing. One of my favorite things about this book are the covers, they are very simplistic but also very eye catching and very much about what will happen in the issue. There are many stories being told in this comic. There is the aftermath of the space station exploding from last the last issue and following the characters and what happened to them. There are also other stories continuing or starting as well. A team find the wreckage of the space station and figuring out what happened and what it all means. At the end of the issue one of the people who finds the wreckage is boarding a plane and he looks very sickly which makes one think that the virus that infected the people on board has infected him. It’s very reminiscent of the movie Contagion for me and I love it. There are a lot of

different stories and elements at play here that look to be shaping the overall story of this first arc but at the same time I still can’t figure out what that is or what is happening and that’s a major reason why I love the series. One of the other reasons I love this series so much is because it takes advantage of the entire issue as a comic book. There aren’t any advertisements for other comics or comic book conventions, in fact the ads in the comic serve to show the world of Nowhere Men. The art is another reason I love this comic, all the different characters are very distinct from each other which is really helpful in a story where a lot of different characters are doing many different things. I fell that this comic is very special and that once it gets more issues under its belt it’s going to have a lot of people reading it and talking about it. So if you can still find the first couple of issue I urge you to jump on board with this series. 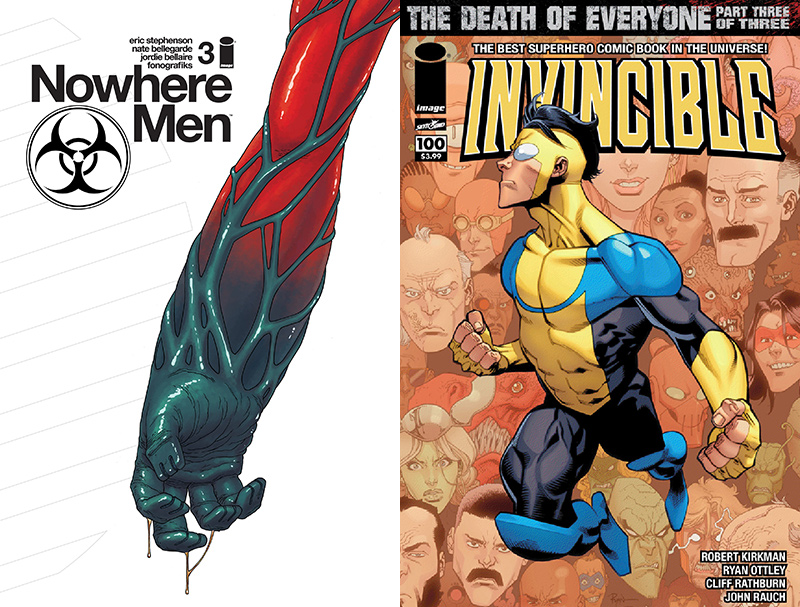 3. Invincible #100 by Robert Kirkman, Ryan Ottley Cliff Rathburn, and John Rauch[Image]
Okay, this is it folks, another one of Robert Kirkman’s series has hit 100 issues. SPOILERS ON THIS ONE. I was very excited for this issue because Invincible was the first Kirkman comic I picked up, it’s also what lead me to find The Walking Dead. I remember when Invincible was ahead in numbering compared to the The Walking Dead but The Walking Dead has already passed issue 100 this past summer, and now it’s time for Kirkman’s other book to get the spotlight. This issues starts off with some pretty shocking, graphic, and bloody scenes. The shock of the film crew that films Invincible’s skull getting crushed and then his torso ripped apart, says it all. I was shocked as the way that Invincible #100 started and I loved the reactions from all the characters that have been in the book. I just wish when I turned the page that I didn’t see Invincible.

At the time I didn’t know that he was still alive but as you read on you found out that Invincible was actually not killed off and it was another plan from Dinosaurus. Now though I wasn’t thrilled that this was the way things went down I was still happy to see Mark alive. The result of all the destruction that Dinosaurus has done has and through a conversation that he has with Invincible leads him to the conclusion that the best thing for this planet is for Invincible to kill him, and he complies. This is a huge deal for Invincible and something that I think will be touched upon in the future of the series. This action leads to Invincible and Cecil talking and coming to another conclusion, Invincible returns to work with Cecil. I wasn’t crazy about that decision, I don’t know how that is going to work out exactly or if it will last long, especially when Eve confesses to Mark that she’s pregnant. Another reason is that the entire world thinks that Invincible is dead, so do they reveal that to the world again or do they keep it secret and use it as a way to tell new stories in the comic? For the most part the things I really liked about this issue were the small things or hints to issues past or development of new story lines. I loved the splash page reaction of the cast of the book, The Immortal going to back to super heroics, Angstrom Levy coming back for revenge to find out that Invincible is dead, and the reference to the first issue when Mark learns that he can fly. Going into the next 100 issues there’s a lot that can be done in this comic and I am looking forward to seeing what those stories are, especially since we still have the Viltrumites around.

The Superior Spider-Man #2 by Dan Slott, Ryan Stegman, and Edgar Delgado [Marvel]
I loved this issue simply for the fact that is shows how smart Dan Slott is, or more importantly, what issues fanboys and the loud people of the internet would be complaining about and making a mountain out of a mole hill. I love it because Dan Slott is answering them directly without answering to them to directly. These issues, along with the last few of Amazing Spider-Man were written before the backlash on the internet occurred.

Dan Slott wasn’t answering anyone because none of the issues were out there yet. But the reason that these issues are coming up in Superior Spider-Man is because Dan Slott had the same issues or at least thought of the same issues that would come up when talking about the issue of Doc Ock being in Peter Parker’s Body. This shows how smart of a writer he and it also shows that this isn’t something that was done just to be done. There are plans for Peter Parker and Superior Spider-Man. Slott is a known lover of Spider-Man, all he’s ever wanted to do was write Spider-Man and he’s getting to do that right now and I’m surprised by how many people aren’t loving this, because I am. Peter Parker calls bad luck the Parker Luck.

That says a lot about the character, saying that he’s bad luck, history has shown this. But it also says a lot about the character that even though he thinks he’s bad luck he still perseveres, he still has the drive to overcome. And he will, he just hasn’t yet, because the story is just beginning. And though I don’t think it’s going to end soon, at least there’s already someone in the book that is suspicious of this ‘new’ Peter Parker going around. Also, Stegman has been killing on art and I have to point out something I really liked in this issue was that whenever Doc Ock is in civilian clothing so is Blue Peter but when Doc is out as Spider-Man so is Blue Peter. I don’t think it’s anything important but I think that’s a neat little thing to do with those scenes and it also keeps the presence of the real Spider-Man in the book. 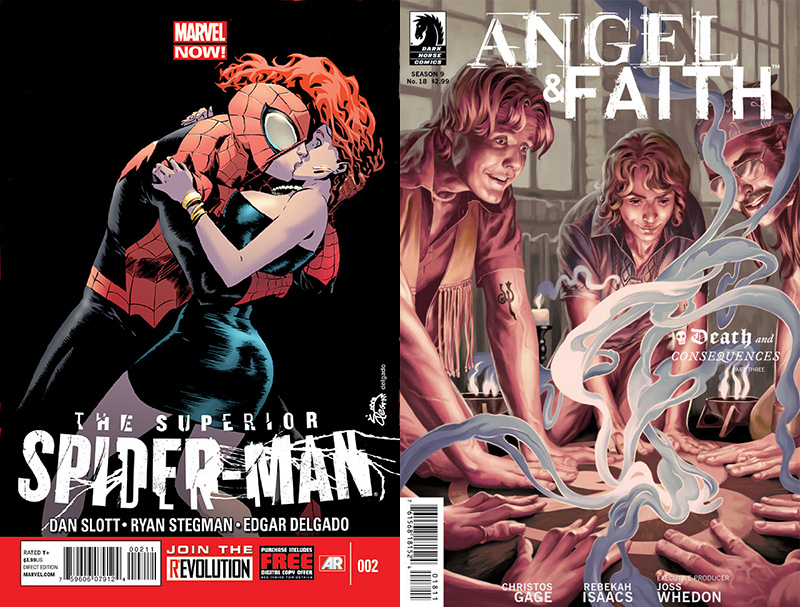 Angel and Faith #18 by Christos Gage and Rebekah Isaacs [Dark Horse]
I’ve said before that Angle and Faith is not only one of my favorite comics but also my favorite Buffyverse comic since the Buffy stories started becoming canonical. Angel and Faith not only captures the essence of what made Angel the TV show great but also it adds to the character history that we have gotten to know. This current arc has given us a lot of background the man who would become Buffy’s Watcher, Giles.

On the show we’ve gotten hints and sometime have seen a little bit of when Giles was younger and use to run with a bad crowd and was called Ripper. At the end of season eight of Buffy, Angel as Twilight killed Giles and in this series, Angel has been collecting objects that retain small parts of Giles so that he can resurrect him. This arc has caused some problems, one, Giles corpse has been stolen, two, Magic is in low to nonexistent supplies, and three, in this issue you find out that the majority of Giles soul has been promised to a demon, something that occurred in his youth as Ripper.

From what I’ve read online this series is ending at issue 25, so at issue 18 the creative team is laying ground work for the final story arc. Everything is coming together, why Nash, Pearl, and Whistler are working together and how that fits with the demon, Eyghon. It’s all very exciting, especially with the character that shows up at the end of the issue, which I won’t spoil here. So if you read this comic check it out because that last page will make you squeal with delight.