While I Breathe, I Hope! 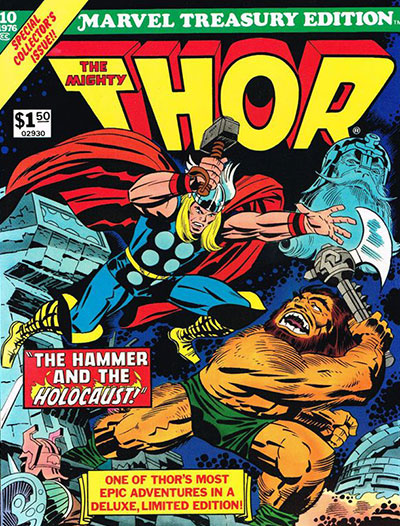 Ho, warriors of Midgard! At one time, I verily believed myself to be alone in my appetite for tales of heroes most wondrous. But nay! In recent years, there hast been an army building – one not of sinew and steel, but of hearts overflowing with affection for the wonder we call COMICS! In one breath, it did seem that where there was once a world of amazement and gods walked the Earth to the great awe of mortals, today this world hast grown callous and jaded. In days past – when wall-crawlers were still named Parker, when Hulks were still named Banner and when events did not span a dozen titles over a hundred fortnights – your humble scribe enjoyed tales of such action, merriment and heroism that the Valkyries themselves sung praises aplenty, forsooth! ‘Tis not my intent to dwell on the joys of yesteryear, but to share with you all those tales. Should you wish to join in my revelry, I ask that you don your mystic cape, fill high your flagon of mead (or coffee, in my particular case) and delight in the tales which used to beget many a reader to cry “Excelsior”!

While the best comics are not limited to a particular era or publisher, it is the Silver and Copper Ages of books by the Marvel Comics Group which call to me and earn my strongest affections. My aim is to provide an objective review of comics from days gone by, be they good or bad. However, a poorly made book is no way to launch the inaugural column of Comics ‘n Coffee, and so we begin our journey with a wonderful story which was compiled within the classic form of a Marvel Treasury Edition. In 1976, the tenth issue of this forerunner to the trade paperback was produced released as an 82-page epic, “The Mighty Thor: The Hammer and the Holocaust!”. Originally published in single issues as The Mighty Thor #154-157 in 1968, this assemblage of awesomeness was created by those best of pals, Smilin’ Stan Lee and Jolly Jack Kirby.

This story features gods, goddesses and gargantuas galore, spanning the entire cosmos in the blink of a mortal’s eye and threatening the existence of the very universe itself! The God of Thunder endures a trial for the ages as he travels from ailing warrior Sif’s hospital bedside to Asgard’s throne room (occupied by the most dastardly of tricksters, Thor’s brother Loki) to the heart of battle near the distant land of the storm giants. There is no lack of Thor-isms in this book, true believers, as the Odinson belts out such boisterings as “So long as LIFE endures–thou must LIVE it to the full! Else, thou be UNWORTHY of the title–MAN!”.

What is a story without an overwhelming villain? While we indeed have evil Loki usurping the throne of Asgard while Odin sleeps the Odinsleep, and while Ulik the mightest of trolls plots his revenge against Thor, they are as nothing compared to the power of a billion, billion beings as the artificial being, MANGOG, emerges from his eons-long crypt to threaten all of the universe. Not even Thor can halt the creature’s advance on Asgard as Mangog plows through Asgard’s mightiest forces, even The Warriors Three! He seeks revenge for Odin’s capital punishment of his entire race by unsheathing the Odinsword, which shall bring about the end of the universe. 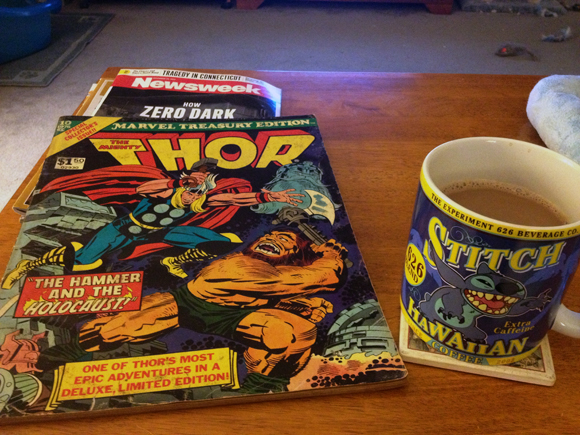 Despite overwhelming odds, Thor and his allies fight the indescribable Mangog with all their might, which proves little more than an annoyance to he who possesses the strength of an entire alien race. The normally courageous Volstagg, dashing Fandral, grim Hogan, fair Sif and sly Loki all know fear in the face of such an unprecedented threat. Loki refuses to send help, hoping his brother perishes in the battle, and noble Balder stands helpless as Karnella, the Norn Queen, holds him prisoner. Even when all of Asgard turns its vast strength and weaponry toward the beast – even as the Thunder God brings all his power to bear: the lightning, the wind, the storm – Mangog advances into the heart of Asgard and brings our heroes to their knees. Yet still, they fight on.

Facing the end of all things, they fight for honor. For Odin. For each other. When Mangog prepares the killing blow for the Odinson, he meets a sword-wielding defender: “Not whilst BALDER lives!!”. As he thinks the last of the resistance has fallen, Mangog is assailed yet again: “STILL the living fleas dare RESIST??”. When he finally reaches the Odinsword, none remain against him save Thor, Sif and the Rigellian Recorder (here to witness the end of all things). Of course, Loki is nowhere to be found when the crucial moment arrives, and with no one who can stop him, Mangog begins to unsheathe the Odinsword and bring about Ragnarak! The climax is more dramatic than a speech by Doctor Doom, but I dare not spoil it for those who may wish to read for themselves. However, I offer these three words as a hint, as well as the primary theme for this tale in its entirety: DUM SPIRO SPERO. Until next time, friends, keep reading those comics, keep drinking that java and may the Hoary Hosts of Hoggoth watch over you. Fare thee well!