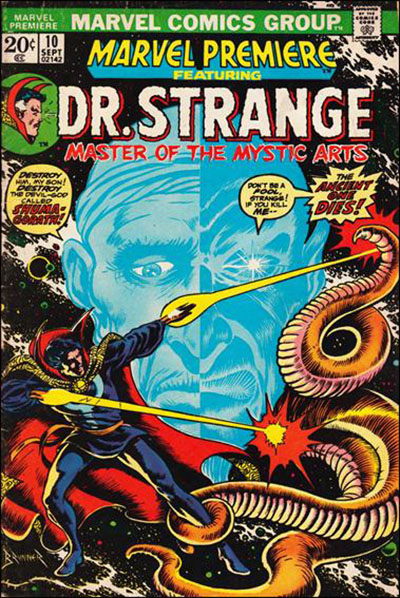 This edition of Comics & Coffee puts a chill up my spine as I write it, dear reader, for it shines a light on things best left hidden in darkness. Marvel Premiere started out with stories about Adam Warlock, but issues #3-14 take us through the hauntingly harrowing quest of Doctor Stephen Strange as he endeavors to save the life of The Ancient One and the soul of the entire universe! For only 20 cents in 1972, some of Marvel Comics Group’s key talent brings us the titanic tale of Doctor Strange as he travels wide across the globe and to the far reaches of space to halt the coming of “He Who Sleeps, But Shall Awake”, the primordial god of all evil (first mentioned in the Robert E. Howard short story “The Curse of the Golden Skull”), Shuma-Gorath!

Mighty Marvel celebrates the 10-year anniversary of Stan Lee and Steve Ditko’s occult creation, the Master of the Mystic Arts, by teaming up the writing talents of Gardner F. Fox and Steve Englehart with artistry by Irv Wesley, Frank Brunner, Sal Buscema, Craig Russell and Jim Starlin. The good doctor uses his magical Cloak of Levitation to go from hidden New England catacombs to ancient portals at Stonehedge to a living demonic planet in deep space and back to Earth once again. As our story progresses, Stephen Strange must investigate every tome, tomb and lurking fiend to defeat the evil forces of Shuma-Gorath and learn the secret to stopping the greatest threat our universe has ever faced.

With his paranormal powers dulled and his limbs bound, he brawls with his wits, will and limbs of flesh and bone to first conquer Sligguth, the Lurker in the Labyrinth, and his reptillian human slaves.After narrowly escaping with his life, Strange battles underneath the sea against Ebora, dark priestess of the dreaded Shuma-Gorath and N’Gabthoth, the Shambler from the Sea. His struggles only get progressively more difficult with Dagora, the undersea demon… Kathulos, a sentient planet of pure evil… The Living Buddha, and a host of vile demons and 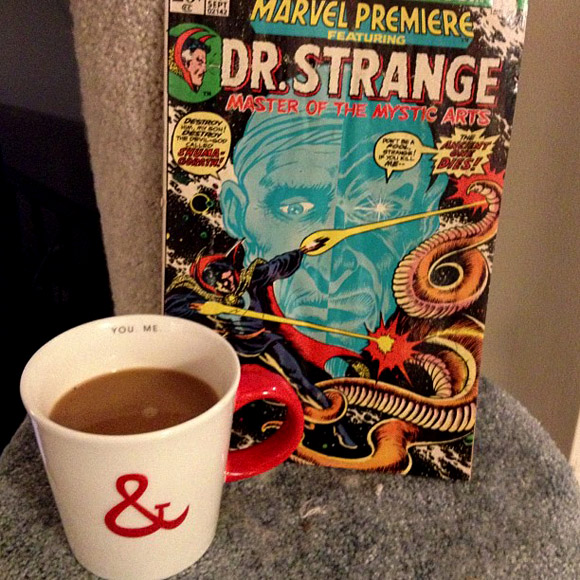 possessed human agents of the prehistoric diety which stalks the soul of our very world!

His loyal servant, Wong, and his lady apprentice, Clea, are helpless to aid Strange in any way. Even the Ancient One, who serves as the universe’s Sorcerer Supreme, lies helpless and half-starved on his deathbed. Surrounded by otherworldly creatures from the crypt and unable to save his master, Doctor Strange comes face-to-face with the dark god from time immemorial, the dread Shuma-Gorath! With his supernatural powers ineffective and his master mere moments from death, what can the Master of the Mystic Arts do to stave off total universal obliteration? Will he prove himself worthy of taking his master’s mantle of Sorcerer Supreme, guardian of our reality from all other realms? You know by now, true believer, that my conscious will not allow me to spoil the senses-shattering conclusion. So, grab your coffee and dig up your issues of Marvel Premiere; neither action shall you regret! Until the Cloak of Levitation gets replaced by a magic tutu, fare thee well!