Hey Comic Impact! What’s going on? Hope everything is alright with you guys, let’s jump right in with my favorite books of last week. 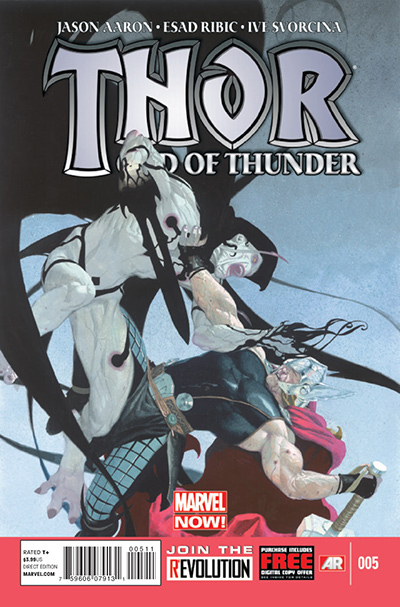 Thor: God of Thunder #5 by Jason Aaron, Esad Ribic, and Ive Svorcina [Marvel]
One of my favorite Marvel Now re-launches has been Thor. Thor was never a character that I really liked or enjoyed until I saw the movie and now having one of my favorite writers in comics writing the character I can only say that this has been a great opening arc. I was on board with this series as soon as I heard that Jason Aaron was going to be writing but then when I heard that his opening story arc was going to be about a serial killer of the Gods, my interest piqued. Issue 5 is the conclusion to the first story arc involving Gorr.

One of my favorite aspects about this comic has been that the story takes place in three different times. The story has mentioned before that Thor has lived a long time and that over that time his memory of past events becomes a victim of his longevity of being alive. Memories fall to the ether and he seems incapable of remembering things when he should. So it comes to question how does the Thor of the present and the Thor of the future not remember Gorr, the God Butcher? That question is answered and as a reader I was very pleased with the response. Young Thor, kills Gorr, or so he thinks. And Young Thor is vain and brash and very ‘what’s next?’ minded. Why should he consider or remember anything about Gorr is he thought he killed him, though he did remember the cave. That line of thinking goes to show why present Thor doesn’t remember Gorr. But the thing that this comic did that I really liked was bringing Gorr to the future Thor and present Thor following him and we get a glimpse of present and future Thors teaming up to battle Gorr, The God Butcher.

Though the arc doesn’t finish with Thor times two versus Gorr I still very much enjoyed this first arc and I know that this isn’t the last time we’ve seen Gorr. Jason Aaron has created such a great villain and we get to know his motivations for why he is the way he is in life, and it turns out he’s a very nihilistic creature, which should say a lot to his character since he kills Gods. It’s why I think this villain is very interesting and I’m looking forward to his origin issue next month.

Daredevil #23 by Mark Waid, Chris Samnee, and Javier Rodriguez [Marvel]
There are 2 major things at play in this issue. The first is that someone is trying to recreate the accident that blinded Matt Murdock and gave him his powers. Which we also find out is part of the growing conspiracy to make Daredevil’s life a quantifiable mess. This leads to all these failed experiments being unleashed in a party which Daredevil has to control.

The other story in the issue about Matt Murdock and Foggy Nelson and them reeling with the news from last issue, the news that Foggy has cancer. Most of the issue is the two best friends hanging out, with Matt as Daredevil swinging around the city with Foggy on his back. They have a lot of sweet scenes together, scenes of serious talk, joking around and laughing. The issue ends with Matt coming through for Foggy as they go to the doctor’s office together to hear what kind of cancer or treatment Foggy will need. Matt is pretty hopeful throughout the entire issue but the doctor give Foggy the bad news, in what is one of the most heartbreaking scenes I’ve seen in any comic in a long time. Foggy has cancer and it’s not a type of cancer that is curable or at least able to be dealt with in some way.

Now the big question that I have is, is this legit? Meaning, is there a deeper game being played here? We know that Matt/Daredevil is getting attacked from all angles right now, both as Daredevil and Matt Murdock. The last few issues were all about turning Foggy against Matt and putting him in a world of hell, and we know that the main manipulator is still out there trying to get to Matt and Daredevil. I don’t want to take away from the importance of this storyline but at the same time I can’t help but feel, at least partly that there is another higher element at play here, especially since Matt Murdock has a history of people he cares about getting bad news that’s used as a way to mess with him, lest we forget Karen Page. 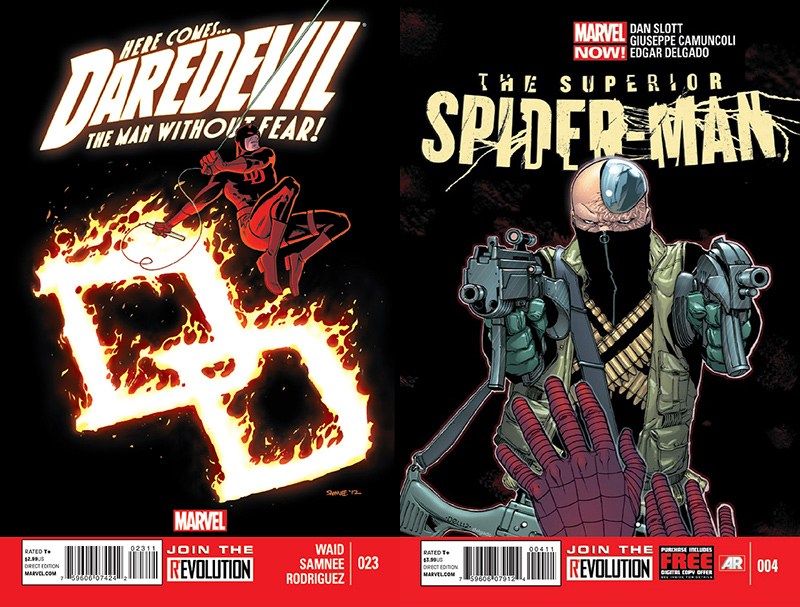 The Superior Spider-Man #4 by Dan Slott, Giuseppe Camuncoli, and Edgar Delgado [Marvel]
Okay folks, this book was pick number three because of the final page and what it means to the series overall. I’m going to spoil it, so you’ve been warned. There is a lot of story going on through the issue and it’s all beautifully drawn by the great Giuseppe Camuncoli. The issue sets up the current arc that will be drawn by Camuncoli but it also sets up a lot of what will be coming down the line in regards to the series as a whole. The final panel in the issue reveals the return of the one true goblin, the Green Goblin! (I hope you guys get that reference.)

Anyway, what does this mean for the title in the future? Well, Green Goblin, is one of the major villains in Spider-Man’s rouge gallery. You could say that the Green Goblin is to Spider-Man what The Joker is to Batman. The Green Goblin is so connected to Spider-Man/Peter Parker. They have so much history together, countless battles and how many people have died from a result of those battles. So Green Goblin has come to play, but were it gets interesting is that Green Goblin is one of those villains that gets knows everything when he goes after Peter but he doesn’t know this, at least we don’t think he does, so this story is going to take some interesting points because I think if there’s anyone that can figure out that Peter isn’t in his body anymore is Green Goblin and that is going to be a huge issue because if he does figure it out who’s actually going to believe Green Goblin/Norman Osborn? If someone does believe him, Carlie perhaps, and they work on a way to help restore Peter to his body, how’s Peter going to feel when his savoir is Norman Osborn. I’m just speculating here but that’s what I love about this comic and that’s what a last page cliffhanger like that is supposed to do.

Nova #1 by Jeph Loeb, Ed McGuinness, Dexter Vines, and Marte Gracia [Marvel]
Last summer I read all of the Marvel Cosmic stories from Annihilation to the Thanos Imperative and everything in between. Nova and the Guardians of the Galaxy become some of my favorite and beloved characters from reading all those books. Abnett and Lanning gave meaning to these character and made them popular so much so that you can’t not give them some credit for the fact that there’s going to be a Guardians of the Galaxy movie. But after reading these stories and these characters disappearing after the Thanos Imperative, there was a void left at Marvel. They had done an amazing job building their cosmic line of comics and now thanks to Marvel Now we are getting re-launches of both Nova and Guardians of the Galaxy. I’m sure I’ll be talking about Guardians next week so that leaves me to talk about Nova this week.

Let’s get this out of the way first, this isn’t Rich Rider’s story, this is about the new Nova that we’ve already seen in the Marvel Universe, in the Marvel Now Point One issue, that I reviewed here on Comic Impact, and here and there in Avengers vs. X-Men. This issue tells the story of Sam Alexander before we see him as Nova. He lives in Arizona and goes to school where his father works as a janitor. His father is a drunk and it’s usually up to Sam to do his job so he doesn’t get fired. He resents his father for this and for the fact that he’s filling his sister’s head with fairytales about the Nova Corps. He also resents his mother for defending his father. His father’s alcoholism results in him not being able to do his job and same gets into a fight with a bully and as a result of that he gets suspended. When he gets home his father is missing and he decides to go out skateboarding but he trips on a rock and he wakes up in the hospital with Gamora and Rocket Racoon standing over him telling him that they need to talk about his father.

I really enjoyed this issue because it was just cool to see the Nova Corps in action again especially drawn by the amazingly great Ed McGuinness. Loeb has a way of knowing exactly what to write for his artists and how to have fun and that’s what this book is, fun. Like most first issues it’s a lot of set up, not for future issues but the characters that are going to be in play the series. I like the character of Sam, he’s determined and he’s out to prove himself. That at least he’s a better man than his father and he’ll show the entire world that. He’s a proud character and we’ve already seen that he’s capable of being Nova, so I’m looking forward to his journey to see how he gets there and also how he’ll react to his father telling the truth. It’s going to be a fun ride. 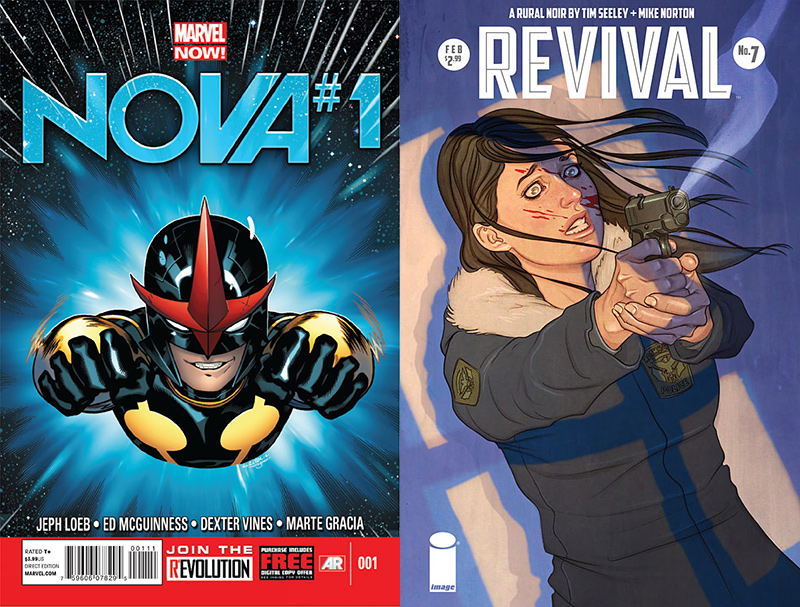 Revival #7 by Tim Seeley and Mike Norton [Image]
Revival is a comic book about people coming back to life, not as zombies but as themselves, as they try to rejoin society, if they can deal with the consequences of being brought back from the dead. I think the premise for this comic, when broken down to pitch form, is very simple, but this comic is far from simple. It takes a lot of aspects that I don’t see a lot of other comic books tackling. I’ve reviewed an issue for the comic before here and I talk extensively about the religious ideas that this comic brings to the forefront. Though this comic isn’t about religion and its implications, it’s labeled itself a noir. Meaning mystery and there are a lot of other mysteries going on in the comic besides the most obvious one.

The reason that I liked this issue in particular so much was the reveal of not who killed someone or even how they killed someone, but the idea that these people coming back might have an agenda and they themselves are prepared to do get revenge and whatever else they think they deserve. We have another character in the middle of that with Em Cypress. I don’t want to spoil this part of the story because I think that it’s really clever, clever like a long con, clever like I want to go back and re-read all the issues so far. I’ve said before that this book is much for than its initial idea and if you’re not reading this comic you are missing out.