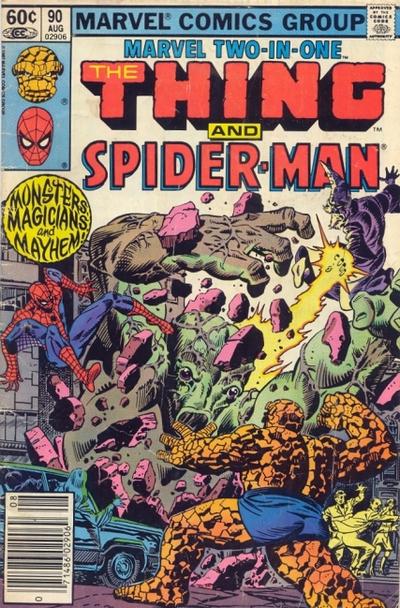 There are certain things that send your mind reeling through time. When you see a favorite movie, smell an old flame’s perfume or hear a song from your childhood, you might as well have stepped into a Delorian or a TARDIS. This is what happens at the sight of Peter Parker on a date with Debra Whitman in the pages of Marvel Two-in-One #90. There was a time when your friendly neighborhood Spider-Man didn’t have the responsibility of being an Avenger, had never seen a symbiote and was only concerned with his love life, his grades and the ever-precarious health of his dear Aunt May. In 1982, the walloping web-snapper took a break from his studies at Empire State University to attend a renaissance faire in Central Park coincidentally at the same time as a certain orange-skinned, cosmic-powered man-of-action.Bitten by a radioactive spider, Peter Parker gained the proportionate strength and agility of an arachnid, along with an extrasensory perception of danger.

Ben Grimm was an ace pilot who flew an experimental spacecraft through a cosmic ray storm, transforming him into a rock-like powerhouse, The Thing, who became the heart of the Fantastic Four. The plot of this comic book is almost incidental, as this issue brings us all the character elements for which these heroes are known. Peter ponders over whether he really wants a relationship with Deb, finds himself in hot water when he gives her the cold shoulder treatment, and ends up looking like a coward when trouble strikes as he seeks a place to change into his alter-ego. The Thing mopes through Central Park, anxious as ever about his disfigured appearance and the unease it brings to passersby, despite the fact that he shares the company of his beautiful girlfriend, the blind sculptress Alicia Masters. When the action begins, these two heroes spend as much time bickering as they do fighting evil. But, that’s exactly the charm of these beloved characters.

The story follows that an awkward young magician of the faire fails in every trick he attempts, but succeeds in accidentally combining the certain magic words which summon the spirit of an evil wizard from centuries past. The villainous spirit of Sardeth the Sorcerer takes over the boy’s body and begins to exercise its powers in this strange, modern era, turning the faire’s maypole into a multi-armed murderous entity and the jousting knight into a powerful demon.

By the time the two super-powered allies figure out how to beat back the wizard’s spells, Sardeth commands an ancient subterranean monster to spring from beneath the New York City streets and charge at our champions. The giant green gargantua proves to be a physical match for The Thing, so it’s up to the wall-crawler to find a way to foil Sardeth’s evil schemes.The story is fun and well-written, and it’s the perfect reading material to accompany a strong Cup ‘o Joe on a Sunday morning. 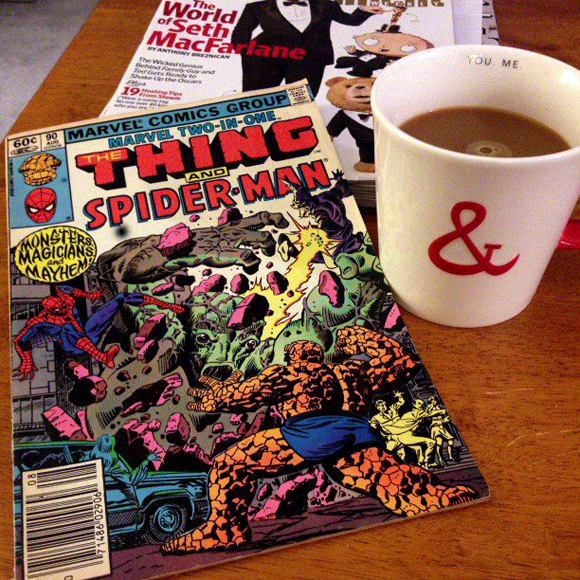 When the story concludes, however, there’s still some enjoyment to be had in the extra material, such as Bullpen Bulletins. It seems that Marvel spent a pretty penny on a national TV advertising campaign to promote the launch of a new comic book called G.I. Joe, which released its 48-page premier issue for $1.50, printed on deluxe paper and featuring a “super-special anti-terrorist unit of the U.S. Army”. A few pages later, we get a full-page ad for a new series all about our favorite Olympian demigod, Hercules! The Prince of Power took to the stars in a limited series written and illustrated by Babyface Bob Layton. And finally, the book ends with a trio of beautiful advertisements: one – a comic portrayal of the exciting world of Dungeons & Dragons, two – fake doggie doo, hand buzzers, squirting pens and other novelties from The Fun House, and three – an application form to join the G.I. Joe Mobile Strike Force Team for only $5.00 per year! All-in-all, a great read for this edition of Comics ‘n Coffee. Until next week, just wobble my webs and call me shaky, and fare thee well!

Marvel Two-in-One #90 was published in August 1982 for 60¢ and written by Jan Strnad (Star Wars), penciled by Alan Kupperberg (Spider-Man) and inked by Jim Mooney (Supergirl) with a cover by Ed Hannigan (co-creator of Cloak & Dagger) and Al Milgrom (pretty much everything).