A Comical Battle of Egos(or “an I for an I”) 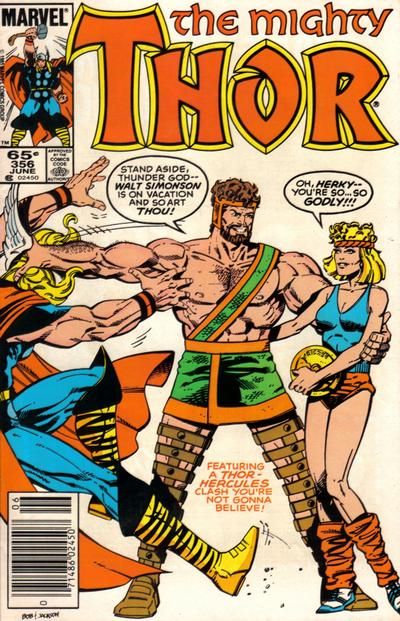 “And there came a day, a day unlike any other, when Earth’s mightiest heroes and heroines found themselves united against a common threat. On that day, the Avengers were born – and when that threat proved too much for the Avengers, they called upon the Lion of Olympus to save the day. Heed the call, then – for now, and forever, Hercules stands triumphant!” A year after Marvel pulled off “Assistant Editor’s Month” to great acclaim, a fill-in creative team took the reigns of The Mighty Thor after 19 consecutive months where Walt Simonson basically ran the whole show. The Mighty Thor #356 sold for 65¢ in June 1985 just as The Incredible Hulk faced certain death during his exile at The Crossroads, Rocket Raccoon and Iceman were in the midst of their respective limited series, and Sasquatch faced off against Sasquatch in the pages of Alpha Flight.

The opening scene of this comic features Herc and Avengers’ butler, Jarvis, strolling down a Central Park jogging trail next to a tree featuring “Walt + Weezie” graffiti (for the book’s vacationing writer/artist and his wife, Louise “Weezie” Jones Simonson). While this isn’t part of an official “Assistant Editor’s Month”, the issue has plenty of fun at the expense of our super heroes. For example, after being struck in the head by a flying Frisbee, the Prince of Power’s response to its owner’s concern is “Fear not, fair maiden, you did only strike me in my head!”. To be perfectly honest, dear reader, there is more fun in this issue than your humble author could possible describe, yet I shall share my best effort with you as we share a strong brew this morning.As Hercules and Jarvis prepare to seek the ingredients for a feast of Olympus, we see distractions abound. On a nearby hill, however, awkward youth Matthew, whose passion happens to be art, finds himself fending off the the bullying criticisms of older student Tony and his pals. These teenage tough guys can’t help but give the smaller boy a hard time for wanting to forego sports on a summer day in favor of his sketchbook, and can’t understand why he would choose to draw Thor instead of “real heroes like the Torch of Spider-Man”. The boys seize a prime opportunity to show their creative classmate how foolish he is when Hercules strolls by, and they shove Matthew into his path, demanding that Matthew ask him who is stronger, he or Thor.

The magnitude of Hercules’ physical power is only equaled by his ego, generosity and ability to spin legendary tales. The tale he tells, however, in response to the boy’s question, is not without its … exaggerations. Stretching from Avengers Mansion to the empire State Building to “a place the gods forgot — New Jersey”, Hercules’ story recounts how the jealousy by the Thunder God of the son of Zeus grew out of control one day. Apparently, Thor’s behavior was not unlike a spoiled child, bonking Hercules on the head with Mjolnir in frustration of losing an arm-wrestling match against his fellow Avenger. To be “rudely hit … with a weapon as ridiculous as the uru hammer of all things is too much to ask of even the son of Zeus!”.As the two battle into the streets of New York City, Hercules handily thwarts every attempt by Thor to gain the upper hand. In fact, Thor’s complete disregard for public property brings disgrace to the “Avenger” name. 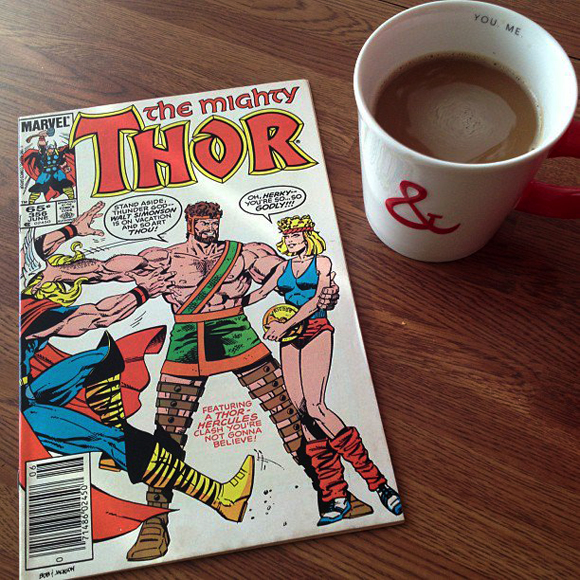 Not only does he rip up a street in an effort to unbalance his sparring partner, but then proceeds to use a private citizen’s vehicle as a makeshift weapon. “Oho, Thor!”, says Herc, “Surely you do not intend to stop me with that puny car!” “Oof”, struggles Thor, “ ’Tis not just a car, Hercules — ‘tis a Volkswagon!” As they fight on, the valiant Hercules tirelessly proves his physical, intellectual and moral superiority to the Odinson time and time again. As credible as this yarn seems, true believer, even I became suspicious when Hercules lift up the entire island of Manhattan to dump Thor into the East River.

It remains to Jarvis to notice that Matthew appears distressed by the Olympian’s story, while the “unruly-looking” Tony seems to be enjoying himself. Seeing the lad’s artwork, which is full of Thor drawings, gives Jarvis all he needs to deduce the state of affairs. He whispers the details to Hercules a moment later, and the powerhouse has a decision to make. Does he finish the story as he told it, with him as the mighty hero and Thor as the pitiful buffoon? Or, does he reverse the narrative and unravel his ego a bit, making Thor the victor while uplifting the boy’s spirits, as well as his stature among his spiteful peers.

Without any lack of respect for “Bob & Jackson’s” work, which is absolutely beautiful, I’d like to say that I see shades of some of my favorite artists in this issue, including John Byrne and Dale Keown. I don’t dare to guess if they inspired or were influenced by the former, but I’m pretty confident to say that they engendered the latter. Not only is this a comic book worth reading, but it represents an age and level of talent which we may not see again. There were serious stories of global crisis, relationship turmoil and monstrous villians, but comics could take a break from that once in a while and poke fun at themselves. I enjoy being taken along for the ride, and I will be here each week to bring you all with me. Until Hercules replaces his “Have at thee!” battle cry with “Can’t we just be friends?”, I bid you to fare thee well!