HIT ‘EM WHERE IT HERTZ! (or… Amped-Up Battery Above the Loop) 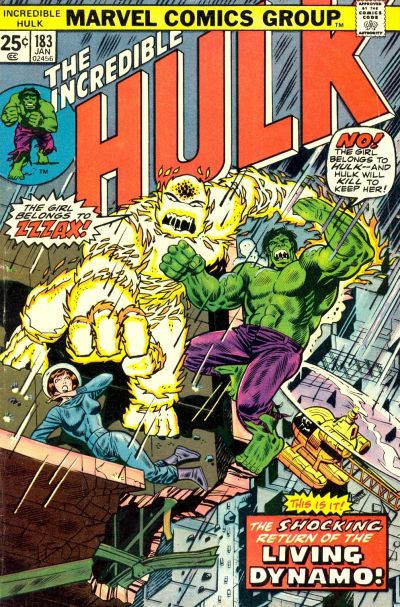 Dear reader, I could converse about The Incredible Hulk all day and night long. This is not exaggeration in the slightest, for my love of the green goliath has spanned 30 years and spurred a silly audio podcast production about the Hulk which earned me the nickname “Smash”. But even before I began reading the adventures of ol’ mean and green, he was stomping across the Marvel Universe, putting fear in the hearts of citizens and evil-doers alike. For 25¢ in January 1975, you could join Bruce Banner and his alter-ego for another monthly adventure courtesy of Len Wein, Herb Trimpe and Marvel Comics Group. Grab your favorite hot beverage mug and join me for “Fury at 50,000 Volts!”.

As with most Marvel titles during the Bronze Age of Comic Books, the characters of note are presented in quick, detailed clarity. The Hulk appears on the very first page and within a few frames, his completely avoidable confrontation with a passenger train ends badly … for the train. In one page, however, we see not only the simple-minded Hulk threaten the safety of a train full of passengers, but also his immense power as he lifts the train and places it back upon its track. Quickly fleeing the scene, he leaps right into Lake Michigan, swims toward the Chicago Loop and changes into his human self, mild-mannered Bruce Banner, who immediately finds a janitor job at a local lab, “Soul-Star Research Ltd.”.

In rapid succession, Banner’s janitor ruse unravels and he gets invited to participate in a scientific experiment at Soul-Star to draw ambient brain waves from long-dead historical figures, which expectedly goes awry and instead re-forms Zzaxx, The Living Dynamo! Where things get interesting, however, is that – while indeed a horrible fate – Zzaxx’s lethal absorption of one of the scientists ends up assimilating not only his life energies, but the last thoughts of his life – namely his undying love of fellow scientist Alexandria Knox. This feeling of love transfers to Zzaxx so that while he tries to kill off the other humans, he also gets very protective of Alex.

“The strain … the TENSION … taking their toll … Hulk must LIVE!”, and so he does. In the face of such a threat as Zzaxx, Banner loses control and transforms into the mightiest mortal to walk the face of the Earth, The Incredible Hulk! The jade giant and his deadly foe initiate a donnybrook which cascades all the way from the streets of Chicago to the top of the John Hancock Center (the tallest building in the world as of the issue’s publication), all with the object of Zzaxx’s desire, Alex, in tow under Zzaxx’s arm.

The two monsters battle to a standstill in the thin air above The Windy City and “Hulk is the Strongest One There Is!” turns out to be a hollow claim when faced with an electromagnetic bolt to the eyes. 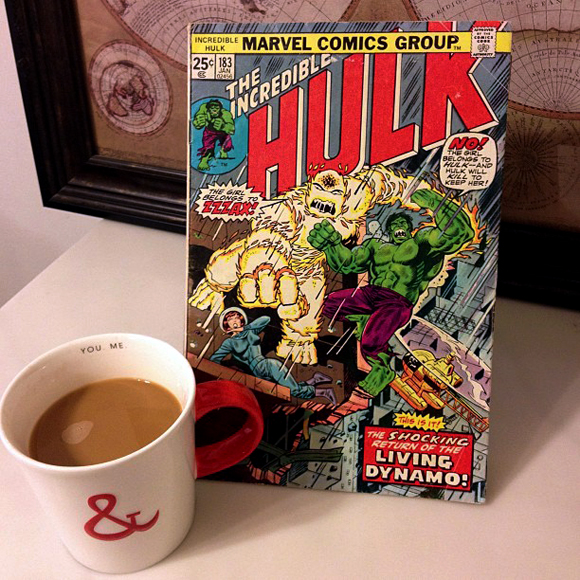 Just when it seems that Zzaxx has the upper hand, Hulk judo-slams him down onto the tower’s roof. Alex fears that no matter which monster wins the fight, it’s curtains for her. Suddenly, a helicopter penetrates the stormy skies to reach the top of the building and Mark, the third of Soul-Star’s scientific trio, aims a spear gun straight at The Living Dynamo. “I’m only going to get ONE shot at this,” he says, “I’ve got to make it count!” He’s here to rescue Alex! What’s his plan and will he succeed?

If you know anything about me, true believer, it’s that I abhor a spoiler, and so I defer to your fine judgment to track down this book and read the explosive finale for yourself. While the artist was the same, it was writer Steve Englehart who created Zzaxx back in Hulk #166 (August 1973) as the result of a terrorist act at a New York City ConEd plant. His entire being is comprised of electromagnetic energy which is dependent on absorbing living beings, specifically human mental energies. He’s fought Luke Cage, Hawkeye, Cable, She-Hulk and Iron Man, but his greatest appearances have taken place in the pages of ol’ jade jaws’ magnificent mag. Thanks for reading another Comics ‘n Coffee, my friend, and Fare Thee Well!