We are the World … We are the Children of the Atom 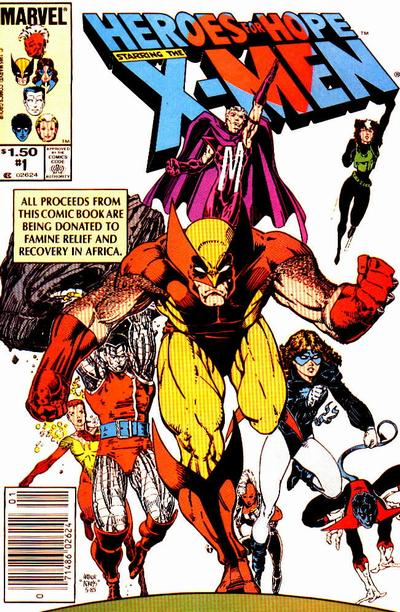 In 1985, I was still adjusting to a new house, neighborhood and school away from everything I had ever known, but somehow became aware of an upcoming television program called “Live Aid”. There had been a devastating famine in Ethiopia that year and a large group of musicians, bands and other performers were getting together for a gigantic fundraiser/telethon to raise both money and awareness of the plight of Africa’s starving population.

I was fired up! I’d like to tell you, dear reader, that I was incredibly sensitive to the hungry and malnourished people half-a-world away, but I cannot. At that age, my world revolved around coming home from school each day to eat Oreo cookies and watch an hour of Transformers and G.I. Joe. Thus, the burning desire I felt was not of a humanitarian sort, but of a kid who loved his rock ‘n roll. I mean, when else would I ever get to hear the likes of Elvis Costello, Sting, U2, Queen, David Bowie, The Who, Elton John, Billy Ocean, Black Sabbath, Run-DMC, REO Speedwagon, Madonna, Duran Duran and Lionel Richie perform all day long?

My silly, prepubescent mind even decided to use my allowance money to purchase some blank cassette tapes and set my tape recorder next to the TV set all day so that I could relive those performances again and again.Around the same time, Marvel Comics’ editor-in-chief Jim Shooter took on Jim Starlin and Berni Wrighton’s brainchild to publish a benefit book for Africa. Heroes for Hope, described as a “jam”, ended up starring the Uncanny X-Men, one of Marvel’s biggest cash cows and most popular title at that time. As a “jam”, it featured the work of such legendary comic creators as Stan Lee, Alan Moore, Chris Claremont, Denny O’Neil, John Romita Jr., John & Sal Buscema, Walt Simonson, Frank Miller, Bill Mantlo, Howard Chaykin, Jackson Guice, John Byrne, Richard Corbin, Arthur Adams and many more, along with non-comics talent such as Stephen King, George R. R. Martin, Harlan Ellison and Edward Bryant. For $1.50 per issue, readers could help send the proceeds to famine relief in Africa while getting a good story, not to mention a piece of comics history. Heck, this is a better lineup than even Live Aid, so grab your coffee and let’s check it out!

As the writing, artwork, color and lettering continually change throughout the entire issue, the flow of the story suffers as a result (although this makes reading the book a fascinating exercise). Thus, the story was kept relatively simple to account for all the different heads butting together to get this collaboration done by the publication deadline. When the X-Mansion seems to bring a blazing-hot desert to the X-Men’s doorstep, the team’s efforts to rescue a fallen mailman put them in jeopardy as the desert heat begins to eat away at their very flesh – as though they “ain’t eaten in weeks”, as Wolverine muses.

Upon a sudden return to normalcy, the mutants try to wrap their collective heads around the unexplained phenomenon, and they determine that some unknown enemy is behind it. This enemy launches psychic attacks against the mutants, one at a time, and targets their deepest fears and personal failings. The team comprised of Wolverine, Storm (the X-Men’s leader, yet stripped of her mutant powers), Shadowcat, Magneto, Colossus, Rachel Summers and Nightcrawler each suffer great mental anguish (all except Rogue, who is inexplicably spared). Once recovered, Rachel Summers’ psychic powers determine the enemy to be in Africa, and so the team journeys via their hypersonic jet, the Blackbird, to the Dark Continent.Instead of a super-powered foe, however, they find starving throes of people.

Without hesitation, the team helps unload a pair of C-130 Hercules transport aircraft and distribute supplies to the populace over the course of a couple days. They despair and pontificate concerning the horror of starvation, and all the X-Men’s formidable powers go for naught as they watch children die in their arms before even taking a bite of the food. Rogue becomes so distraught, in fact, that she steals her teammates’ powers while they sleep and then instinctively discovers a subterranean chamber where a primeval entity lurks who feeds on human misery. It’s a god-like force as old as time and wishes to test the mutants to see if this new breed of humankind poses any kind of threat to its parasitic lifestyle. Rogue takes on the entity alone, but quickly finds herself on the losing end of the struggle. Is she fighting a sentient metaphor or a malevolent monster? Will it get the better of her or will help arrive in time? Can even the X-Men triumph over famine, death and despair? 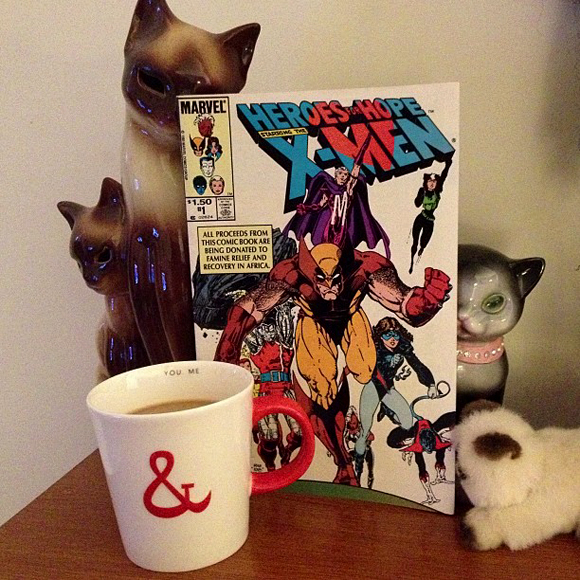 I was not an X-Men reader at the time of publication, but eagerly anticipated my monthly mail-order copies of Incredible Hulk and G.I. Joe: A Real American Hero. Since then, however, I have gained more than enough familiarity with Marvel’s miraculous mutants. You may be interested to know that this book featured Wolverine in his Brown & Tan costume (my favorite) while Storm sports her renowned mohawk haircut and punk rock uniform. Rather than focus on their mutant abilities, the story does an excellent job of spotlighting the X-Men’s personal turmoil, character depth and interpersonal relationships – attributes which made the Uncanny X-Men so well-liked over other superhero titles. What’s more, true believer, is that the pages by horror scribe Stephen King are quite chilling, especially considering they’re in a good ol’ funny book.

“All proceeds from this comic book are being donated to famine relief and recovery in Africa” was the caption placed on the cover, right on top of Art Adams’ artwork. While the original intent was for proceeds of Heroes for Hope to go to Oxfam, the charitable organization rejected the book on several grounds, and so more than $500,000 ended up going to the Nobel Peace Prize-winning American Friends Service Committee. The following year, DC Comics put together Heroes Against Hunger, a benefit book for African hunger relief starring Batman, Superman and Lex Luthor. It was also a “jam” book and featured a plot by Jim Starlin and character designs by Berni Wrightson, both who started this whole shebang back a year prior! Thanks for reading another Comics ‘n Coffee, my kindred caffeinated compadre, and Fare Thee Well!

Heroes for Hope starring the X-Men was created as a joint effort between 20 different writers, 19 pencilers, 18 inkers, 14 letterers, 11 colorists and two editors. A full listing can be found inside the front cover of the marvelous mag within a back-issue bin at your local comics store, or you can check it out at http://en.wikipedia.org/wiki/Heroes_for_Hope .