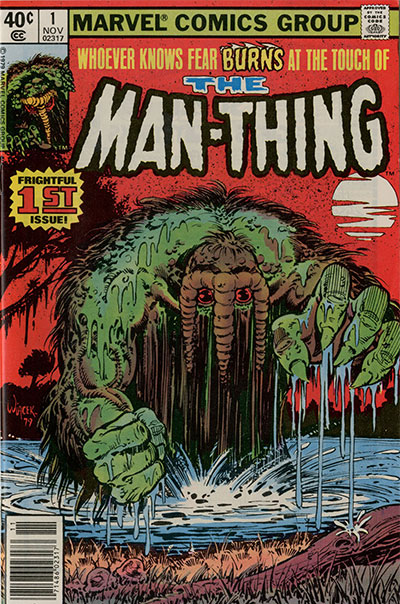 There was a time when not every hero had a perfect smile and wore flattering tight spandex. This was also the time when horror stories didn’t automatically mean zombies and supernatural tales weren’t confined to teenage vampires with over-inflated libidos and under-inflated acting skills. Imagine this pitch meeting at one of your modern comic book publishers: it’s a monthly story about an inhuman protagonist made of swamp muck who lives purely on instinct, not truth, justice and the American Way; someone who doesn’t wear a costume, never leaves the Florida Everglades and can’t even speak. Now imagine this character becomes so popular that it inspires more than one volume of headlined comics over three decades. I’m pretty sure that particular pitch would get laughed right out of the meeting room (“Security! Escort Mr. Hansen from the premises!”). My caffeinated friend, few people would understand how such a formula would work in today’s modern world of comics, but it’s a solid fit for the morning musings of this edition of Comics ‘n Coffee.

First appearing in Savage Tales #1 (May 1971) and created by Stan Lee, Roy Thomas, Gerry Conway and Gray Morrow, Man-Thing became one of the most tragic figures in the Marvel Universe. Working for the U.S. government to replicate the formula which turned Steve Rogers into Captain America, Theodore “Ted” Sallis successfully solved the secret super soldier serum. Sadly, however, Sallis was betrayed and – realizing that he had no escape from his enemies – he injected himself with the formula which combined with the mysterious powers of the swamp to transform him into not a muscular specimen of human perfection, but a hulking husk of monstrous muck. At least The Incredible Hulk got to turn back into Bruce Banner once in while and could form coherent words as the green goliath. Sallis’s body and brain were irrevocably perverted as he became completely mindless, existed solely on instinct and enbodied of the very substance of the swamp itself.

The first volume of The Man-Thing ran for 22 solo issues and was followed by five quarterly issues of Giant-Size Man-Thing. The premier issue of this second volume of The Man-Thing helped close out the 1970’s by reminding us that “whoever knows fear burns at the touch of Man-Thing”. “Regeneration and Rebirth” shows us the brutal swamps of the Everglades where a pack of hungry alligators finds more that they bargained for in a vicious contest with our handsome hero. This precedes a scene at a university research lab where a “Dr. Oheimer” (perhaps meant to sound like “Oppenheimer”, the physicist who developed the atom bomb?) ponders over experiments of historic importance. His work involves renewal of damaged brain tissue, meant for people with severe brain injuries. Unfortunately for the doctor, however, his work has earned him unwanted attention and he is abducted by armed men on his way home one night.

The good doctor awakes from a Chloroform-induced sleep hours later in a Florida farmhouse surrounded by a gathering of CIA agents who explain how they need Oheimer’s help. They want to recover the super soldier serum, but need the man who knows the formula. Now, Oheimer knows nothing about Sallis or Man-Thing, so the agents present a slideshow where actors reenact the scientist-turned-leviathan’s origin story. It sure seems like a lot of effort to explain how they need Oheimer to restore the mind of a creature whose brain has become vegetable matter. He agrees, however, and they begin building a (super expensive-looking) trap where they can lure Man-Thing into captivity for some compulsory treatment. 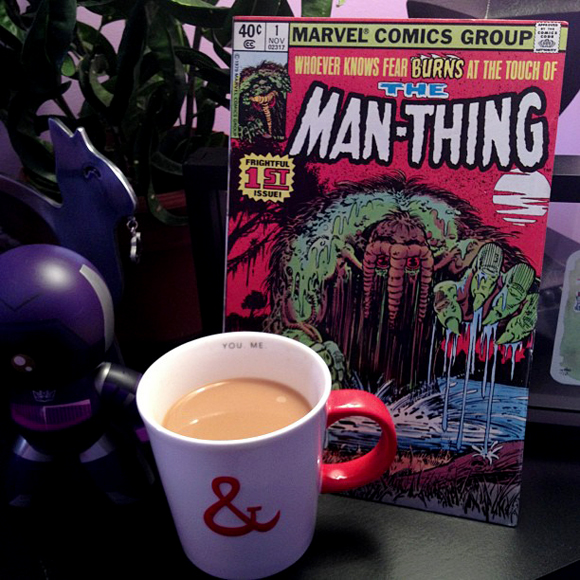 The doctor gives Man-Thing injections of his experimental brain-cell regeneration formula, and it seems to work wonderfully as Man-Thing begins to demonstrate rudimentary intelligence and understanding. It’s then, however, that we learn that these aren’t CIA agents at all, but a group of “enemy agents” looking to deceive their way to acquiring the priceless serum! The FBI discovers the plot and notifies Washington, D.C., where the perennial pain in the posterior of The Mighty Avengers, Henry Gyrich, decides to call in the U.S. Army to address the situation. Just as Oheimer sees his dream becoming reality and Man-Thing begins to recall the humanity he lost so long ago, the Army and the enemy agents commence a big gunfight and brou-ha-ha which puts the kibosh on Man-Thing’s rehabilitation. While the soldiers received no such orders, one sergeant finds Oheimer and claims that they’ve been directed to destroy the creature. Man-Thing’s rehab allows him to feel his own emotions for once, and the fact that he is so close to humanity, but to be cruelly denied his goal, fills him with rage. Widescale carnage ensues and a climactic finale closes out the comic’s inaugural issue.

My fellow Marvel Zombies might hypothesize, as I have, about the identity of the “enemy agents” who invest so heavily in the ruse which so convincingly fools Dr. Oheimer. The usual suspects in acts of espionage against the U.S. are a colorful and well-known group. These include AIM (Advanced Idea Mechanics), Hydra or even operatives of Dr. Doom and the Red Skull. My thought, however, is that such parties would be much more likely to strong-arm Oheimer into working for them rather than use such elaborate (and expensive) deception. No, dear reader, I am more likely to believe that the sinister party behind this devious hoax would not rear its head in the funny books until three years later as written by Marvel scribe Larry Hama. Not possessing super powers, but dedicated to overthrowing all the world’s super powers, I’m referring to no one else but the terrorist organization determined to rule the world, Cobra. It was still in the Marvel U, so I see no contradiction in my argument (and, in fact, could’ve had great guest appearances by the Dreadnoks, ).

You have joined me today along my journey within dark and mysterious wetlands as I read my first-ever issue of The Man-Thing during my career as a comics fan (see my bio on the website for how many years –http://comicimpact.com/about) . There are many Man-Thing stories which both precede and succeed this one, true believer, by the likes of Steve Gerber, Len Wein, Chris Claremont, Steve Englehart and Boisterous Bill Mantlo. Things get a little complicated as time goes on, I surmise, as we are introduced to the Nexus of Realities and theories of multiversal divergences. Therefore, I’d suggest starting off with a copy of Marvel Essentials: Man-Thing and filling a Thermos full of steaming hot java to get you through the quagmires and bogs. Fare Thee Well!

The Man-Thing #1 (Vol. 2), published in November 1979, is scripted by Michael Fleisher (Jonah Hex) and penciled by Jim Mooney (Supergirl), with inks and cover by Bob Wiacek (Star Wars).