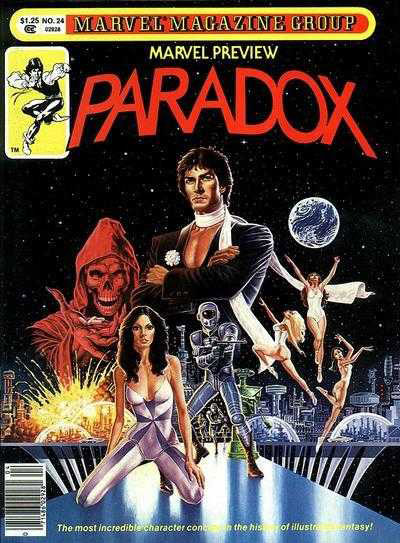 Marvel Preview was among some of Marvel’s extensive line of magazine comics from the mid-1970s to the early 1980s, which were somewhat akin to miniature graphic novels, not to be confused with the actual graphic novels published around the same time. In addition to this publication, there were other variety books on the market such as Epic Illustrated, Savage Tales and Marvel Movie Premier, along with magazine-style titles focused on singular characters, including Kull and the Barbarians and Rampaging Hulk. For $1.25, you got a heckuva lot of story, usually in stunning black-and-white pencils and inks, and got to meet a variety of fascinating characters without having to follow an ongoing plot.

Marvel Preview was published quarterly, or seasonally (i.e. Spring, Summer, Fall & Winter), and ran for 24 issues before changing its name to Bizarre Adventures, which then ran until issue #34. Readers were treated to a host of popular favorites, such as Thor, The Punisher, Black Widow and Dracula, and also were introduced to future stars such as Dominic Fortune, Rocket Raccoon and Star-Lord. Not to gush, but many of the industry’s creative legends helped develop these titanic tales, including John Byrne, Howard Chaykin, Stephen King, Jim Starlin, George Pérez, Gil Kane and Steve Englehart. And those are just the creators on this specific title! Many more talented writers and pencilers contributed to its sister magazines, but the list is far too extensive to touch on today.

If writer extraordinaire Bill Mantlo had remained a continued presence in comics and pop culture until today, he might be looking at BBC America’s programming with a small hint of pride. Starting in Doctor Who several years ago and moving to another series called Torchwood, a character by the name “Captain Jack Harkness” is shown as a space-faring secret agent who isn’t afraid to get his hands dirty, carries the weight of history on his shoulders, has literally cheated death on more than one occasion, and is a master of seduction among both genders. You could accurately state that the bulk of his character was written nearly 33 years ago, since that’s when Bill Mantlo and Val Mayerik created PARADOX.

While Mantlo may have written a character who would strongly resemble Captain Jack some three decades later, the real Paradox is from a future Earth some 200 years ahead of ours. In this tale, our entire solar system has been colonized, but there is still the disparity of class and race, along with many of the social problems which naturally follow. Humans have genetically created off-shoots of themselves to work on mining and production colonies across Venus, Mercury, Mars and the other planets. While Earth remains a hub of government and paradise for wealthy humans, the various sub-species’ struggle for equality and their very livelihoods. Humanity chooses to live as though their relations are beneath their notice, not worthy of basic rights and almost to the same degree as slave labor. When problems with their colonies arise, Earth’s forces have an army of agents who address them with absolute authority, à la the 18th Century British Empire.

Paradox doubles as both a secret agent for the Earth government and a universally-renowned anti-gravity dancer, performing to the delight of the human elite and in the occasional off-world goodwill tour. He is sent on such a tour to the Lunar colony (our moon), but is secretly there on a mission to investigate the death of the Terran (what they call Earth) ambassador, who mysteriously perished in a drug-induced blaze. The blaze did not come from any form of explosion, fire or incendiary device, however, but from the volatile drug he ingested called “fireflite”. Paradox learns through his investigation that the ambassador’s widow is involved in the conspiracy, along with the owner of a popular pleasure palace named Sebastian Seasons, whom it seems is an important figure from Paradox’s past. 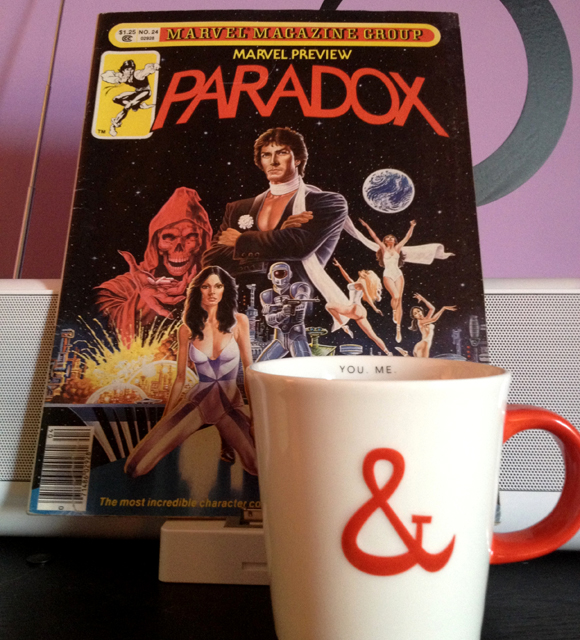 In addition to his dancing prowess and extracurricular allure, Paradox has been genetically modified – and is the only successful case of this – to be a shapeshifter. He can immediately transform his features, voice and genetic makeup to be any of humanity’s off-shoots, even identical to specific individuals. Thus, he is able to infiltrate many places where the ultra-famous dancer could never go undetected, or unmolested. Paradox has his own way of doing things, much to the chagrin of his superiors, but he gets results while fulfilling his own agenda. His decisions, however, are never without controversy. Despite his official status as a government agent, he engages in promiscuity, illegal drug use, deadly games of chance and other debatable activities to either further his investigation or fulfill his own desires.

We find many exciting elements which are much too extreme for your super-hero, kung-fu or romance comics: sex, murder, drugs and gambling, but it all comes off with style, grace and, most of all, intrigue. Paradox is a spy story at its heart and Bill Mantlo does what the Boisterous One does best: explore issues of racism, poverty, morality, sexual prejudice and revenge, all while giving us a lot to think about in a fun, exciting adventure. Ultimately, Paradox has to choose who lives and who dies, whether to prioritize his mission or his revenge, how to face his bitter father and would-be killer, and what to do with this beautiful Lunar woman who is not at all what she seems. And once his mission is over, how will Paradox deal with his superiors, who are not at all happy with his methods?

Whether you are a fan of James Bond, Blade Runner, Total Recall or Torchwood (many thanks to fellow ROM fanatic David Hosley for the apt analogies), you will find Paradox’s story to be a strange, terrific and perilous journey. After all, it says “The most incredible character concept in the history of illustrated fantasy” right on the cover! Either way, Marvel Preview, Bizarre Adventures and Marvel’s other black-and-white magazine comics will bring you into a world rarely seen in your standard comic shop or spinner-rack fare. Did I say “fare”? Indeed, my cream-and-two-sugars readers, Fare Thee Well!

Marvel Preview #24 was published in Winter 1980 by Marvel Magazine Group as a 65-page, multi-chapter graphic adventure prepared by Boisterous Bill Mantlo and Val Mayerik with a cover by Paul Gulacy.