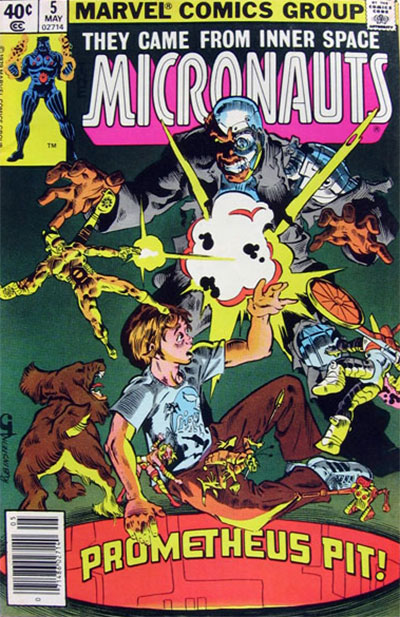 Long has the tradition flourished, this strategically synergized system of comics and children’s toys locked in a hypnotic dance of capitalistic ecstasy. Working its way along numerous franchises, these licensed properties have helped He-Man, Voltron, G.I. Joe, The Transformers and many others to sell more toys, which promote the comics, which once again promote the toys. One of the pioneers of this delirium-inducing pirouette of marketing brilliance was Mego (mee-go) Corporation’s Micronauts. The origins of how this line of children’s toys became a Marvel Comics monthly publication are laid out in an earlier edition of Comics ‘n Coffee (“Small Wonder”), but your ever-modest author wishes to revisit these diminutive darlings and see how they’ve been faring since they entered our world back in issue #1.Marvel made an art form out of introducing the characters of any given story within the first two pages of a comic book. You don’t have to guess who is who for long, as we immediately see images matched with names and even dialogue for Bug, Biotron, Commander Rann, Marionnette, Acroyear and Microtron. Now, Mego wanted you to buy the toys of Micronauts already on the shelf, but Mantlo and Golden helped drive the story by creating characters for which no action figures had yet been created: Marionnette and Bug. Despite the presence of an actual plot, the toys need a-sellin’! After a hasty introduction, our first scene is of the Micronauts traveling in a hovering box-like craft called the Astro Station, which was a tame representation of what was overall a toy with more goodies than something that small should be able to fit inside.

Our heroes have been separated by events which set Biotron the automaton to autonomously repair the Micronauts’ craft, the Endeavor, while the majority of the team searches for Bug, who has tagged along with the human boy, Steve Coffin, to a strange laboratory at his father’s behest. This lab, the Human Engineering Life Laboratory (or HELL), is where Ray Coffin has brought the remains of the enemy ship and its crew defeated by Commander Rann and his companions back in issue #2. As the team tracks Bug to this area, they notice Steve’s dog, Muffin, locked inside the Coffin’s pick-up truck. This gives Rann an excuse to demonstrate one of the Astro Station’s funky features, the Rocket Cannon!

After a little breaking-and-entering, the Micronauts free their canine friend and proceed to sneak into the facility. But how will they open the only potential ingress, the air conditioning shaft ? Aha! Such matters are no problem when your Astro Station has extending mechanical appendages to unfasten the grate! With their greatest challenges overcome, the scene shifts to the Coffins, who have entered the depths of HELL (pun intended) to find that Ray’s colleague, Phil Prometheus, has been studying the Microverse for a way to enter it and gain personal power in the process. In these pages, we also view a segue back to Homeworld in the Microverse, the birthplace of the Micronauts, where Baron Karza is exercising his dominion over the entire populace.More on this front is assuredly featured in future issues, but not a major factor in this issue.The climatic confrontation brings Steve and Ray Coffin directly into the path of Phil’s “Prometheus Pit”, which the crazed cyborg (yeah, Phil is half man and half machine) has created as a portal to the Microverse. Phil wants to send the youth down the pit to evaluate whether humans can penetrate the barrier between worlds… and live! Steve’s dad isn’t too pleased, but his efforts to rescue his son are stymied by Phil’s robot guards. Fortunately, Bug flies into action and brings Phil to heel with his blade, followed by an exciting entrance by the other Micronauts, who proceed to rip the robots to pieces while keeping Steve away from the Prometheus Pit. 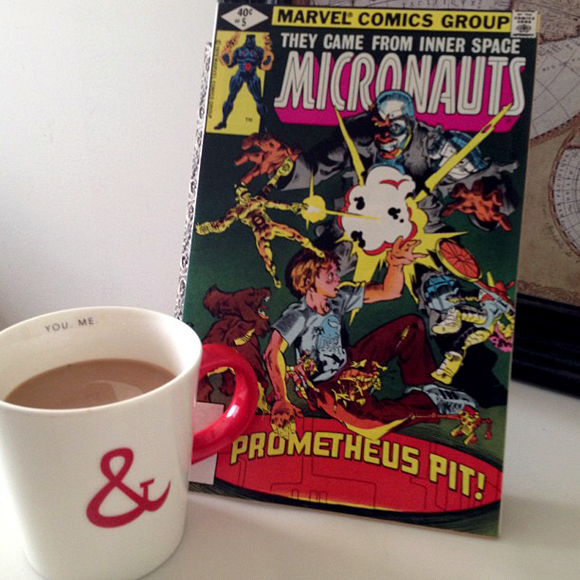 However, Phil has one more trick up his sleeve, and it may end up sending the boy, his father and his tiny friends careening down the pit toward inescapable doom!One of the more clever tools of toy marketing through comics and cartoons has always been the addition of human characters to make the robots or other protagonists more relatable to their audience. Since the Micronauts are such good friends with Steve Coffin, each boy or girl reading this book can feel like they can be friends with their own Micronauts toys, just like Steve. Heck, they even had the same human-to-Micronaut size ratio for the toys as in the comic book. I can only imagine trying to play with an Autobot who was the same size as presented in the comic book or TV show. I’d probably twist an ankle or get a hernia trying to transform the darn thing. I can only hope that I could get a coffee IV while they’re treating my injuries in the hospital. Until next time, true believers, Fare Thee Well!

Micronauts #5 was published in May 1979 and written by Bill Mantlo (Swords of the Swashbucklers), penciled by Michael Golden (The ‘Nam) and inked/covered by Josef Rubinstein (Warlock). I was fortunate enough to meet Michael Golden at C2E2 this year, and we spoke about the Micronauts, as well as how Boisterous Bill Mantlo’s nursing home was fortunately spared during last year’s Hurricane Sandy mess in the Rockaways.