THE SWEET SMELL OF SUCCESS… AND FREE COMICS

Owner James Rhone has delivered more comics merchandise per square inch than there is gold at Fort Knox. All clichés aside, in a space just slightly larger than most people’s living rooms, Creative Comics features all the comics and related merchandise you could ever need, and even some items you never knew you wanted. For the last 11 years, Free Comic Book Day has been bringing in new readers and existing fans to sample the latest independent and mainstream creations in order to drive awareness, generate sales and cultivate new customers in a business niche – the small, independent comic book specialty store – which is challenging to thrive in today’s market. While some people may claim that this is a dying trade, I would argue that this particular store is taking an industry-wide slump and showing the world just how it should be done. 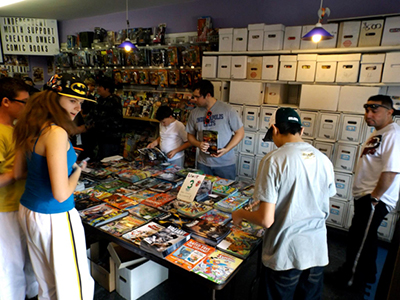 Entering the store on May 4, 2013, I could see that things were already in full swing. In fact, I could tell that this was a big deal before I even entered the store due to the action on the sidewalk. Creative Comics brought in artists and artisans who – while not names as large as those in attendance at last week’s C2E2 – tempted your author’s wallet with items of fine workmanship and flair. An entrepreneurial young lady hooked me right away with hand-made pillows made with geek-oriented fabrics, including Star Wars, comic book heroes and space landscapes (spacescapes?). I ordered two. Among the artists in attendance, John Kulczar’s work captured my interest and I walked away with an adorable framed piece of my greatest inspiration, The Incredible Hulk. Before entering the store, finally, I passed an item of ultimate enticement … a game wheel. For the small price of $1.00, you got a spin of the wheel to win a host of amazing items, including copies of Nova #1, Heroclix figures and other comics of varied worth. Answering a comics-related trivia question could even earn you an advanced spot on the wheel in case you didn’t care for the item on which your spin landed. After already getting my money’s worth at this point, I entered the store.

Despite the challenges of a small space, Creative Comics is organized in a way that allows customers a good deal of mobility. Therefore, even though there were at least a dozen patrons inside as I entered, I had no problem making my way to the tables of free comics and other areas of the store. After I selected some free comic books from creators I had never read before, I made my way to the back issue bins, where I jockeyed for position along a few gentlemen who gleefully sought out items to fill in the gaps of their collections. I had some gaps of my own to fill, particularly in my Bill Mantlo wish list. Thus, I was ecstatic when I found issues of Thor, Iron Man, Frankenstein’s Monster, Red Sonja, Marvel Team-Up, Spectacular Spider-Man and Marvel Two-in-One (30+ issues), all written by Boisterous Bill! Combining these with a full run of Giant-Size Man-Thing and the first seven issues of The ‘Nam, and I consider this quite a haul.

Finding good back issues is an everyday occurrence at Creative Comics, but when I approached the counter to pay for my items, a new experience awaited me. In addition to free comics, artists and other promotions, Mr. Rhone has spearheaded an incredible fundraiser to help support the healthcare costs of Bill Mantlo in his New England nursing home. James and his staff used C2E2 as an opportunity to solicit donations for the fundraiser, including an art page of Superior Spider-Man graciously donated by Humberto Ramos and sketches of Hulk and Rocket Raccoon by Eric Powell, Katie Cook, Art Baltazar, FRANCO, Chris Giarrusso and Matthew White, along with a custom Indestructible Hulk cover (front and back) by Cory Hamscher and a signed photo of Green Ranger (Mighty Morphin Power Rangers) Jason David Frank. These items are being raffled off – some have tickets for sale, others award tickets for store purchases, and still others earn tickets for food pantry donations – and the Ramos art page is up for auction. The fundraiser will be continuing through the next week, so I am really excited about this effort and how it will be used to help relieve the Mantlo family’s financial burden for Bill’s care. 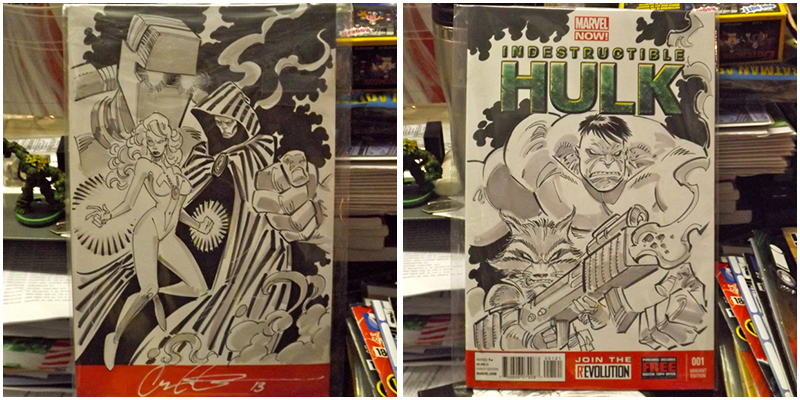 I’ve attended my fair share of Free Comic Book Day events, dear reader, but this was by far the most interesting, well-attended and well-rounded. I hope that you were able to attend a local comic shop and enjoy some new books, true believers. If you are ever in the neighborhood of Northwest Indiana, I strongly recommend visiting Creative Comics, as I guarantee you’ll find something meaningful, along with the nicest staff you’ll ever meet. Fare Thee Well!

Creative Comics is located at 216 East Main Street in Griffith, Indiana and can be found both on Facebook and YouTube. Their knowledgeable staff has been providing some of the best in new comics, hard-to-find back issues, toys, apparel and collectibles since 2003. They also feature weekly in-store gaming for enthusiasts of Dungeons & Dragons, Magic the Gathering and Heroclix.