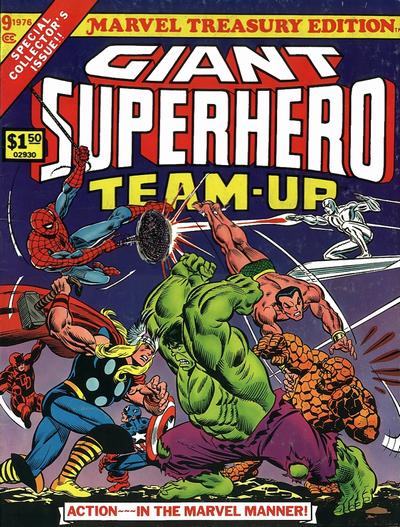 What do you do when your comics, which are mainly sold by newsstands, become too much trouble for too little profit by those same vendors? Simple, you reprint old material, blow it up to enormous proportions and slap a price tag on it more than five times the cost of a single issue! Now, you know my style pretty well by now, my fellow front-facer, so there’s no question that I like to write about comics with profound pontifications, filled with meaningful metaphors or beaming with evocative eloquence. Often, however, I enjoy a simple donnybrook… or even a book full of ‘em! Today’s article, dear reader, features no scholarly scrutiny of a hero’s plight, but simply a knock-down, drag-out rumble among some of the mightiest mortals – and immortals – you’ll ever see on the printed page.

Giant Superhero Team-Up is the ninth issue in Marvel’s Treasury Edition comics. “Treasury” or “Tabloid” comics were created by DC decades prior, but only rose to significant popularity in the 1970s. Since the writers and artists had already been paid for their work, Marvel could sell these high-priced volume for significant profit without having to pay for new art (reprint royalties did not exist at the time). While most of the books were reprints, a few issues featured new material, such as Howard the Duck, Captain America’s Bicentennial Battles and Spider-Man vs. The Hulk at the Winter Olympics. The last of these original pieces also may be the most popular, the final issue of the series, Superman & Spider-Man (the second-ever Marvel-DC crossover).

Two conclusions formed in your author’s mind as I finished this book with the final sips of my dark roast coffee: one, that super-heroes are mostly a bunch of jerks, and two, they really know how to pound on one another. Giant Superhero Team-Up is a TUINO (Team-Up In Name Only) due to the fact that the heroes never once join forces, but simply duke it out in the Mighty Marvel Manner. Sure, it’s usually due to some reasonably contrived misunderstanding, and of course the title character is placed in the most positive light. But in no way, mind you, does any of that detract from the simple enjoyment of seeing men in colorful Spandex put their fists into each others’ faces.

Starting us off is the hot-blooded sultan of the sea, Namor, who is forced to try and save humankind from ourselves by retrieving a powerful Atlantean relic that authorities wish to study and unlock its secrets. Those authorities recruit the equally excitable Ben Grimm, better known as The Thing, to hand-deliver the relic to a place of safe-keeping. Annnnd ACTION. Personally, I don’t think these two even need an excuse to pummel each other into next week, but they definitely put their all into it. The streets, buildings and water distribution system of New York suffers greatly for it, but the real winner of this bout is anyone who gets to see the gorgeous artwork of John Buscema enlarged in full color.

The second match on today’s card puts the heroes affectionately called “Hornhead” and “Winghead” at odds for the most trivial of reasons… a charity exhibition. The only problem is that Daredevil has better things to do – and bigger problems to worry about – than fight Captain America. While Cap awaits his opponent within a packed stadium, the Man Without Fear patrols the city in search of thieves who have stolen radioactive materials, only to find that his hyper-senses make him strangely susceptible to the dangerous rays. So susceptible, in fact, that he forgets crime-fighting and returns to the stadium with only one thought in his horn-headed brain: beat up Captain America and show the world who’s best. These two are quite the athletic duo whose fight combines wrestling, judo, gladiator combat and parkour. Daredevil’s compromised condition only seems to affect his demeanor, where he continually berates the Living Legend of WW2 with a stream of irrational insults. Eventually, the effects of the radiation wear off and Daredevil runs off to find more evil to fight, leaving Cap standing there wondering what the heck just happened. 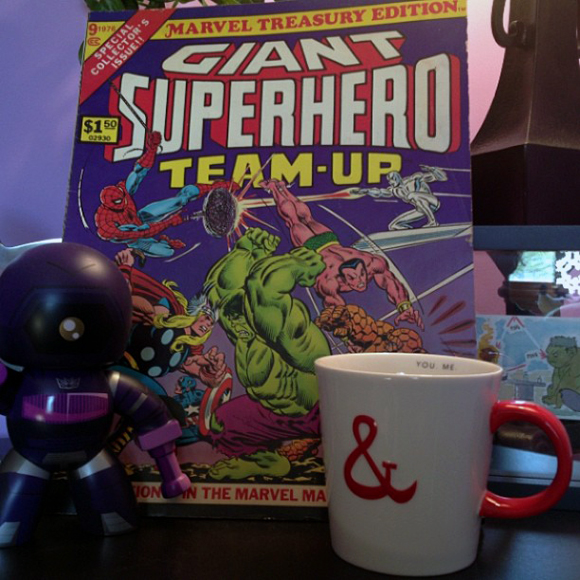 Next is the battle to end all battles, strength vs. strength, irresistible force vs. immovable object: The Mighty Thor against The Incredible Hulk! The God of Thunder regales the story of his first intense one-on-one fight with the green goliath to a group of youngsters who wish to know who is stronger between the two. Well, my friend, it turns out that Thor had the same question when faced with the power of jade giant. Asking for a boon from Allfather Odin, Thor cancels out the enchantment of his uru hammer, Mjolnir, so that he may fight the Hulk for five minutes with only the strength of his sinews and might of his muscles. The two titans literally level parts of the mountain under which they fight. Only the Hulk seems to gain any advantage whenever theOdinson becomes distracted by one thing or another. Thor never stays down for long, however, and the battle might’ve lasted indefinitely but for the mountain crashing down atop the tunnels where they clashed. By this time, the five minutes elapsed and the rest of the Avengers joined the fight, thus ending their one-on-one faceoff.

Lastly, we find the lonely Silver Surfer saving the Earth from annihilation by blasting a pair of meteors careening toward our unsuspecting globe. The former herald of Galactus gets knocked for a loop from the explosion and falls into the waters surrounding New York City. After he regains his senses and begins sailing above the city’s rooftops, his board catches the spinning web-line of the Amazing Spider-Man, who quickly comes to the conclusion that the Surfer must be there to attack him. For his trouble of saving the world, the Surfer must now defend himself against the webs of the wall-crawler when he’d rather be taking a nap and recharge his cosmic energies. Spider-Man gets it in his head that the Surfer is too powerful to be anything other than a danger to the whole city, and so keeps after him despite being severely overpowered. Spideyshoots his webs while Norrin Radd tries not to blow everything and everybody up with his Power Cosmic. In one blast, he could turn ol’ webhead into applesauce, but the fight continues. The only thing that convinces Spidey to stop acting like a jerk is when the Surfer takes a pounding from the military’s weaponry while at the same time saving a young boy from falling to his doom. Upon seeing this, Spider-Man decides that he was wrong to be so impulsive and let the Surfer leave in peace.

There are many more Marvel Treasury Editions to peruse, true believer, and I’m quite sure they all have titanic battles galore. Whether they feature Conan, The Defenders, The Empire Strikes Back or the Giant Superhero Holiday Grab-Bag, you can bet your greenest gamma rays that I shall continue to Make Mine Marvel. After all the tremendous tussles, however, make sure that you remember two things: one, “There is only one who is all powerful, and his greatest weapon is love” (quote from Silver Surfer), and two, Fare Thee Well!

Marvel Treasury Edition No. 9 reprints stories from Sub-Mariner #8; Daredevil #43; Journey into Mystery #112; and Silver Surfer #14. It is written by Stan Lee and Roy Thomas with artwork by John Buscema, Gene Colan and Jack Kirby (cover by Gil Kane)