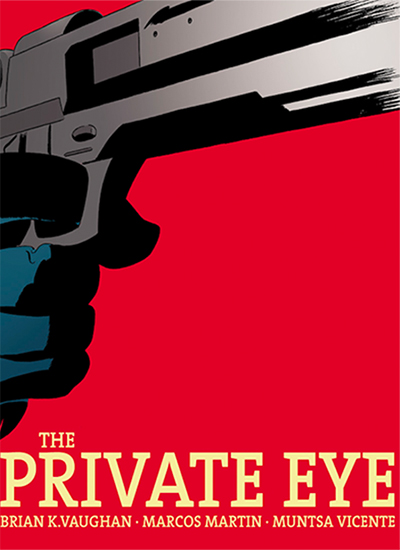 With the absence of Saga for the summer I was bummed not to have a BKV comic coming out at all, but I said to myself at least I’ll have Under the Dome to watch on CBS. Brian K. Vaughan wrote the pilot and will be executive producing the series. I didn’t forget about this series but I didn’t know when the next issue would be coming out since it had been a while since the first issue, it came out in March. But waking up on Tuesday last week and seeing that it was available made me happy and the fact that I was able to just click on a link and buy it for whatever price I wanted was great. Yes I still can’t get over that. I know that not every comic can be like that and that it takes a big name like Vaughan to pull something like this off but still I find that very satisfying as a reader to name my price.

The last time I talked about this comic I talked about my love of the noir, pulp fiction style of this comic and kind of subverting it by putting it in the future, not that that hasn’t been done before, but also keeping the setting bright and colorful which doesn’t seem like noir style, but totally works here. I also like that the first issue set up classic staples of the detective genre and flipped them as well, this continues in this issue. It’s becoming more apparent that the further we get into the story more of the world that Vaughan and Martin have been building will come into play. The whole mask and secret identity has already come into play as someone else has been tricked found themselves at edge of a blade to be taken out and at the same time we get a small look into that character’s motivations. On other side we’re following the private investigator. He’s found out that the client that hired him has been murdered and as far as he sees it that cleans his hands off of whatever he was hired by her to do. But we find out that the murdered woman had a sister and she was the one that recommended the PI to her. The sister confronts the PI and he tells her that he didn’t kill her and she tells him he’s going to find out who did, and then they get attacked by the bad guys, who of course, speak French.

I remember when this series started and I was excited about what Jason Aaron was going to do in this book. He was going to tell a story that took place in 3 different time periods of Thor’s life. He’s done that but has expanded that idea way past that initial concept. Obviously he knew what he was doing but he had to pitch it to people so that they’d pick up a new series while Marvel was launching a whole bunch of new series. As I was reading the comics and enjoying the hell out of them, in the back of my mind I was wondering how this was going to work. The story involved the same villain character and though there was an explanation early on to explain why Thor might not be able to remember certain things from his past battles with Gorr the story took a turn where is showed us that the current time Thor would be teaming with his future self, missing eye and Destroyer arm and all. This issue brings us one step closer by finally having those 2 Thors team up with the youngest version of themselves, Thor.

Past Thor is on a planet where Gorr has put Gods from all different time lines to work as slaves to build for him his master weapon, a Godbomb that is able to destroy all the Gods in the universe. Past Thor does not know when to give up so as soon as he gets put to work he tries to defy his guards but gets put in his place and warned by others that things will get much worse if he tries to rebel. There’s a scene where Past Thor is talking to Gorr’s son and Thor tells him that he must see how strange it is the Gorr has all these Gods as slaves building something for him to destroy Gods when it seems that Gorr has turned into a God like figure himself. Gorr is becoming what he has hated all his life. This is turning into a battle of Gods, God Killers, God Haters, believers, and non-believers alike. This book is full of allusions to other stories featuring Gods. The Gods as slave building a giant godbomb in a desert like planet parallels the slaves in Egypt building the pyramids and I don’t really have to go into the obvious reference of crucifixion. I’m sure there are other that I’m missing but those are the most clear for myself. So this will make an interesting story to say the least and we’re still a couple of more issues away from the final showdown between the Thors and the God Butcher, I just hope there are more space sharks to fight. 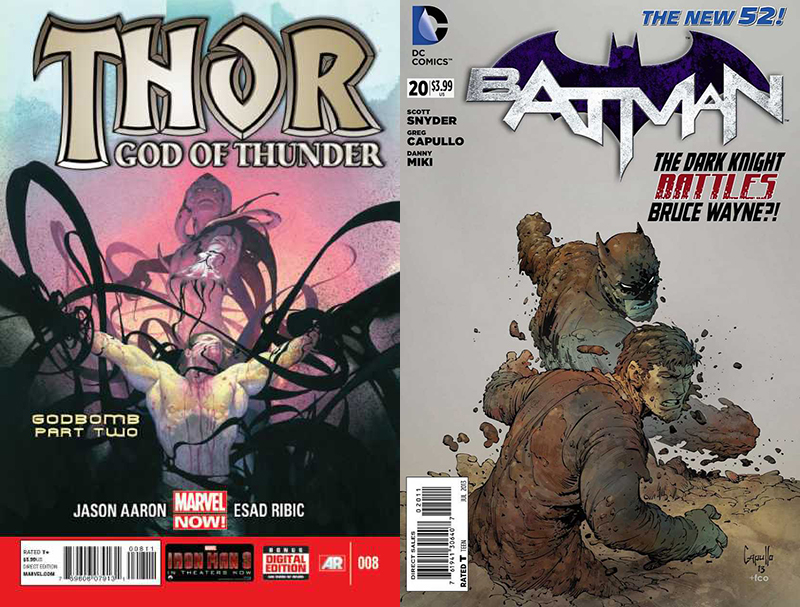 Issue #19 of Batman was in the Top 5 last month because I thought it was a pretty cool take on the character of Clayface and Snyder and Capullo were telling a great story with the character. This issue is the conclusion of that story, a fun 2 parter right before we go back to the past for a whole year and we find out what this whole Zero Year is all about.

There was something that happened in this issue that I wasn’t expecting, it came to me as a surprise, but not a plot twist surprise or anything like that, it was an emotional surprise. But I need to set this up. Clayface can duplicate anyone exactly just by touching them down to their voice, DNA, fingerprints, and all that stuff besides just likeness. He has touched Bruce Wayne and he’s walking around and doing criminal activities while wearing Bruce’s face. Batman shows up and defeats Clayface but not before Clayface touches Batman and reveals that Batman is Bruce Wayne. Batman then captures Clayface and reveals that he was wearing a thin layer fiber mask that had Bruce Wayne’s DNA and that’s why Clayface turned to Wayne. Clayface doesn’t believe that and mock Batman with the death of Wayne’s son Damien. This I wasn’t expecting at all. Not because I don’t think bad guys could be so cruel but because I honestly put the Damien thing out of my mind and I thought that particular story plot was being handled elsewhere. The issue ends with Alfred and Batman sharing a moment remembering Damien. It was all very sweet and nicely handled.

This was also the conclusion to the second part of Tynion’s story where Superman and Batman build their friendship in this new universe. I love Maleev’s art and it was great to see him draw these iconic characters. But it was cool seeing the building of a friendship that when I got into reading comics was already pretty well established. Next month, ZERO YEAR!

The Scoobies are back together again after spending so much time apart. Seeing those characters sharing moments and panel time together is awesome. How long will that last? I don’t know but since we only have a few issues left in this season of Buffy. I have to be honest, I get what Xander is going through but by the time you get to the end of this issue I can’t help it but feel a little disappointment with Xander. Sure I get that someone he loves is dying, and not just dying but disappearing from existence but I figured that the loyalty to a friend would somehow outweigh betraying that friend just because they have a better shot at saving your girlfriend than your friend does.

I thought Xander telling Buffy what happened at the beginning was a heartfelt moment, especially when Xander tells her that he would never betray her and they share a special moment. Xander tells Buffy everything that happened in the last issue, he doesn’t leave anything out, so technically he didn’t lie to her but as we come to find towards the end of the issue Xander is feeding information to Severin and Simone. And that disappointed me a little, but at the same time I can’t help but think and hope that this is some sort of plan to get those characters there so that when it comes time for Buffy and Willow and Xander to defeat them they’ll finally have the upper hand in a battle instead of going in blind like they use to do all the time, and still kind of do. That’s Buffy’s M.O. But these characters are growing up and hopefully getting smarter and what we saw is something that’s part of a bigger plan because I can’t see Xander betraying Buffy, when in the end, Buffy wants the same thing as Xander, and that’s the safe return of Dawn. All I know is that these last few issues have been fun as hell and really exciting to read and I’m looking forward to see how this all goes down. 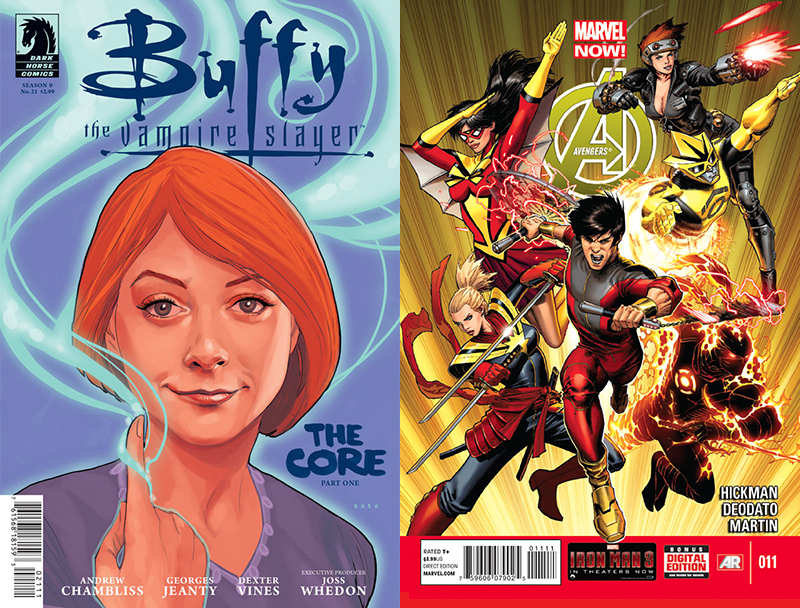 This issue of Avengers starts Black Widow, Spider-Woman, Captain Marvel, Sunspot, Cannonball, and Shang-Chi and it’s probably the most fun I’ve had with a comic in a while. The premise of the story for this issue is that the group I mentioned above are being sent on a secret mission by Captain America to find out what A.I.M.’s next generation bioweapons are and get the specifics of what they can do, the design, the payload, and the yield. The team infiltrates a casino each with a specific role to play in this mission.

The whole issue feels like a story out of Ocean’s 11 except with superheroes. One of the better parts of the Ocean movies is the natural comedy that comes out as a result of having these different characters in the same room and having those personalities come out that result in some very comedic moments, especially involving the super spy Black Widow and Sunspot. Hell, there’s a reference to “Who’s on first” which is one of my favorite pieces of comedy. There’s also some drinking with A.I.M. agents thrown in there for fun along with a bunch of really cool martial arts scenes involving Shang-Chi who is becoming one of my favorite characters in this comic. This comic was a lot of fun in a series that is slowly building to something. I’ve said before that Jonathan Hickman is a great writer and he’s given us something really cool and fun with this issue, especially now when we’re a couple of months away from the launch of his Infinity crossover. I think this is a great stand alone issue that you’ll really like.