IN SPACE, NO ONE HEARS YOU SCREAM (But your blaster still goes “Shrak!”) 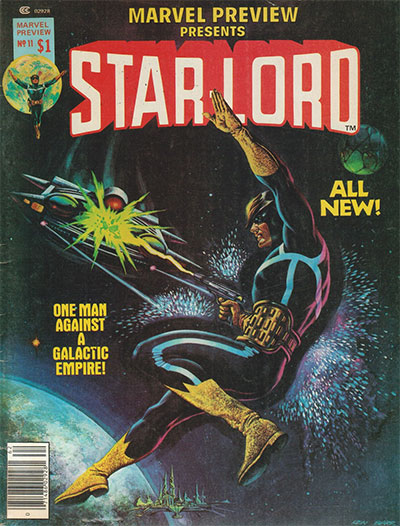 Every so often, your author comes across a comic book which presents such a dynamic story and bountiful beauty that it leaves me virtually speechless. This is one of those times, dear reader, and it is glorious. Most readers of modern comics are familiar with the Guardians of the Galaxy, particularly their enigmatic leader, Star-Lord. Mr. Lord, or “Starrio” to his close friends, isn’t your typical super-powered hero, but that perhaps makes him one of the greatest of them all. For if you are not strong like Thor, agile like Captain America, armored like Iron Man or fast like the Silver Surfer, doesn’t that make your actions in the midst of danger all the more heroic?Peter Quill, a.k.a. “Star-Lord” did not originate in this story, but in a previous issue of Marvel Preview Presents in January 1976 written by Steve Englehart. He was actually written not as your typical hero – a “good guy” – but as a conniving jerk who purloined the power of Star-Lord meant for somebody else. Obviously, the standards for heroism were a bit relaxed in the 1970s, but Englehart had vast plans for the character’s evolution would he had remained with Marvel Comics. However, by the time he returned for more space-faring adventures in Summer 1977, his “jerkness” had tapered off just a tad. Later on, he would play a vital role in the cosmic crises known as Annihilation and Annihilation Conquest before forming the new Guardians of the Galaxy. However, the creative teams behind those stories had big shoes to fill following the amazing storytelling shown here by Claremont, Byrne and Austin (future celebrated trio on Uncanny X-men).

The story appears complex, but reads very easily and is broken up into three acts across three different worlds. These worlds are breathtaking in their beauty and alien exoticism. I have seen black and white artwork before, and I have seen John Byrne’s pencils, but the pages contained in this book surpassed almost every comic book I have ever read. Traveling inn his sentient ship, called “Ship”, and sporting his owl-shaped space helmet, Star-Lord finds some evildoers and leads a slave rebellion aboard a ship after these slavers ravage the populace of a peaceful planet named Windhölme. Finding a pair of allies whose guile matches his own, Peter takes the fight back to the slavers’ base of operations on the pleasure planet Cinnibar, followed by the uncovering of a conspiracy which traces back all the way to the home of the emperor of the Spartax empire! 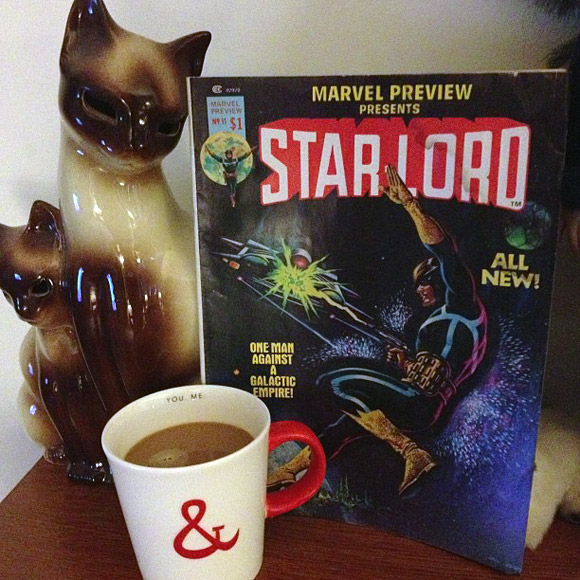 There is just too much in the artwork to adequately describe, although I must say that the spaceships, planets and floating cities are the stuff of your most vivid dreams. Some stories have too many characters to coherently maintain focus on the story, but these characters (Star-Lord, first mate Kip, femme fatale Sandy, Prince Gareth, Sith-Lord Rruothk’ar, Emperor… well, to give you his name will be a big spoiler, but you get the idea) all work in concert to drive the story forward, never getting bogged down in minutia or sidetracked by mundane events. The themes contained herein come across clearly and meaningfully: family heritage and estrangement, unrequited love, abuse of power and ultimate revenge. In the end, we find a highly satisfying adventure and a strong desire to follow Mr. Quill on his further adventures into the mysterious wonders of space.When you have the might of a god with an enchanted hammer, optic blasts from your eyes or can fly while on fire, it’s not much of a surprise when you hurl yourself into danger. But, when your weapons are mainly your wits and a few biological enhancements (he’s basically at peak physical and mental capacity, like Captain America in space), you take a big risk when taking on galactic-size threats. If you want a vulnerable hero who imperils himself to pursue justice and protect the innocent, then I say read about Star-Lord. If you want to see Star-Lord in a gorgeous, well-rendered story, one exciting enough to match your caffeine level, then Marvel Preview Presents No. 11 is the book for you. Fare Thee Well!

Marvel Preview Presents Star-Lord (No. 11) is written by Chris Claremont, penciled by John Byrne and inked by Terry Austin with a special insert by Jim Starlin and cover by Ken Barr.