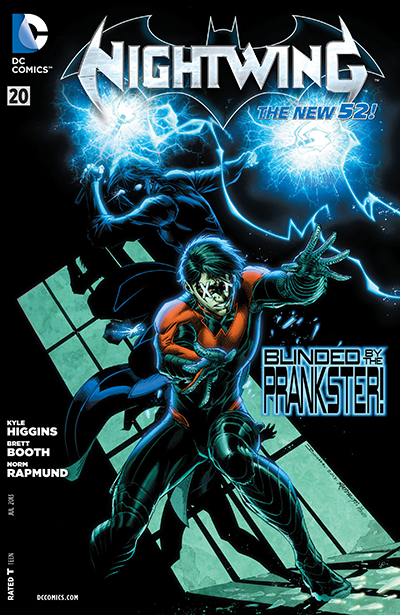 I love what is going on in this book right now. Obviously, since I made this my pick of the week. I just wanted to say that because I really don’t have a critical outlook on this comic other than the fact that I just really and truly enjoy reading this book and I look forward to the day that it comes out.

Despite my not reading comic as a kid growing up my Robin has always been Dick Grayson. He’s been my Robin since the days of watching Adam West Batman reruns to growing up with the character and loving any episode of Batman the Animated Series that featured the character. I remember loving Batman Forever when we finally got to see Robin on the big screen and I remember buying and playing with many different Robin action figures throughout the years. So yeah, I’m a big fan of Dick Grayson. I love that he’s evolved to Nightwing under the guidance of Batman but also to branch out on his own and prove his own worth. I like that he’s trying not to be Batman.

This issue continues Dick’s adventures in Chicago the city that has banned costumed vigilantes. I feel like this is a natural path that the character needs to take. Not only because he has to deal with the Tony Zucco stuff but also it goes back to the characters need to keep looking forward, so in some way it’s also his way of dealing with Damien’s death. He’s left behind Gotham City for now and we’re even introduced to a new potential love interest for Dick. He hasn’t given up his search for Tony Zucco though it still isn’t clear on what is going on there as that’s being developed slowly but also because Nightwing has a new distraction in the Prankster.

I really like this new villain for Nightwing and he has a potential to be a great villain in Nightwing’s own rogues gallery. The Prankster, as I see it is a mix between the Joker and Jigsaw from the Saw Franchise. I am a huge Saw fan, so as soon as I read the character and saw what he was doing in the last issue, I was reminded of Jigsaw, even though I think that he’s suppose to be more similar to The Joker but with a tighter head on his shoulders. Anyway, the fact that The Prankster is doing Saw type traps and making people sacrifice something to keep their life is a great idea for a villain and I’m surprised it hasn’t been done before. It’s such a great idea and I’m glad that Higgins came up with it for Nightwing because Nightwing is a little more down to earth rather than fantastical. It’s makes sense. I can’t leave this review without praising Brett and Norm, because together they make awesome art. I like this new art team a lot, that first page looks incredible and they’re doing some pretty cool things with to make the comic stand out.

Wolverine and the X-Men #29 by Jason Aaron, Ramon Perez, and Laura Martin [Marvel]

Greetings from The Jean Grey School of Tomorrow! That’s the text on the cover to this issue of Wolverine and the X-Men. Inside you will find Wolverine giving a speech on how the school needs to continue in the traditions of Charles Xavier and how important it is to follow these traditions into the future with all that has happened in the last few years, especially now that Xavier is dead. Wolverine’s speech coincides with a class time capsule to be opened at a future date. The students and staff put things in the capsule that are meaningful to them and then we go forward into the future when it will be opened.

One of the reasons I really liked this issue is because I love time jumps and any story that has to do with time travel and things of that nature. Though this isn’t a time travel story it does go into the future and depicts a familiar world that could happen that hasn’t yet. And that’s what I find fun about issues like this one. We jump and we see a new but familiar world and we look to find things that we recognize and what the importance of telling this story is about.

The story ends up being about remembering, remembering the past to try and make a better future. And as we close out the last arc with Wolverine facing his brother Dog Logan again and stirring all those emotions up again we also move forward to the next arc which will be dealing with the future and the rise of the Hellfire Academy. The issue ends with the Academy recruiting its first teacher and student. The Hellfire club has been around since Jason Aaron started his run on the X-Titles with Schism. They have been a thorn at the side of Wolverine and the Jean Grey School of Higher Learning and though they’ve had skirmishes throughout the series this might be the finale battle to settle all and have one take out the other once and for all, or I could be completely wrong and this could be a rival school that will stick around to make Jean Grey’s School miserable.

I didn’t want to talk too much about the story in this issue because I feel like it’s a very personal story for Wolverine and it should be something that should be read without knowing what happens because of how much it deals with the last arc. 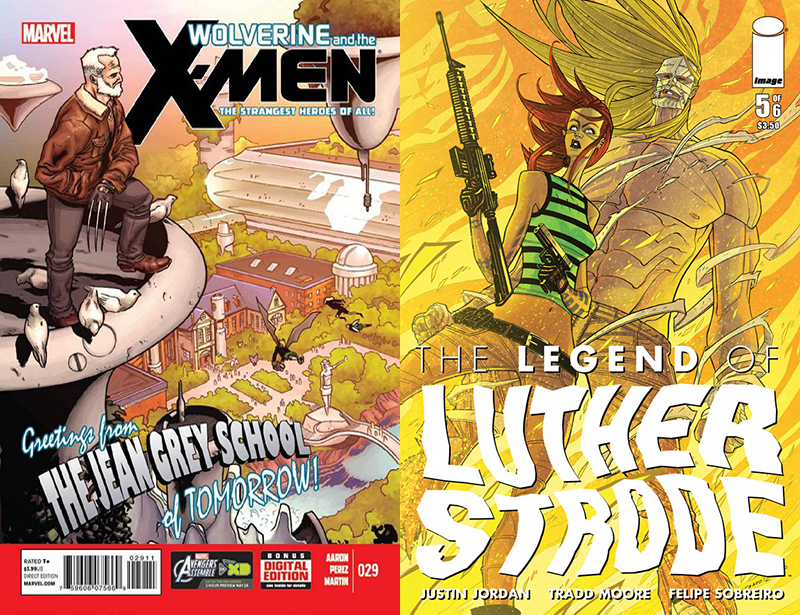 The penultimate issue of The Legend of Luther Strode is telling us a story about redemption. If you remember the events from the first series, The Strange Talent of Luther Strode, you know that this geeky looking kid went to having powers he didn’t understand. Those powers also brought with them a bunch of problems of their own which caused a lot of messes in Luther’s life and changed is drastically and not for the better. There were some other characters affected by the result of Luther getting his powers namely his mother and best friend, who were killed, and Petra who had to deal with the damage of seeing all that carnage but also dealing with the abandonment of Luther.

Luther isolated himself from everyone he knew because he thought if they were near him they’d get hurt or die. At the same time Luther became hell bent on killing any and all bad guys he came across as a way to make up for all the bad things that happened to him and his family. He feels responsible for the death of his mother and his best friend. Luther is like any great and flawed hero, he’s made mistakes and he has to make up for them. Whether it takes him a lifetime or an untimely death he will fight to the bitter end to right his wrongs. That’s what this second series is about. It’s also about dealing with those feelings and trying to right wrongs in a better way that’s just mindless killing. That’s where Petra comes in, she is not only a friend and someone Luther loves but she’s there to ground him and help him so that along this journey of redemption he can maybe one day forgive himself.

I’ve been a fan of this comic series since the first issue and I’ve loved every issue since. I love the story that is being told behind the crazy bloody, gory, but beautiful and kinetic art of Tradd Moore. There’s still one more issue left as Luther has to defeat Jack the Ripper (Oh yeah) but I’m looking forward to seeing where the series continues from here.

If there was a way to describe this comic I would use one word, and that word is fun. Pure and simple this comic is fun. Loeb and McGuinness are having a blast with this comic and when you, as a reader, can feel that radiating from the pages then it’s really hard to not be able to enjoy this comic book. Though this comic is a lot of fun sometimes the fun doesn’t work when there isn’t any heart behind the series and this comic is also full of heart. I love that at the same time this kid Sam is learning to be a superhero and learning about responsibility and his father and his father’s legacy as a Nova, he’s also learning what his father has sacrificed for the most important people in his life, his family. Sam is learning that responsibility now as well. His father is gone and not only does he have to take up the mantel of Nova, which he knows nothing about he has to take his father’s place as the head of the family. He has to shoulder the responsibility that was thrust upon him by his father’s leaving and it is a burden to some people, especially for someone so young. It seems Sam is up for the journey and the challenge, especially if you’ve read Avengers vs. X-Men, but it’s nice to see how he got there and how his journey will continue. 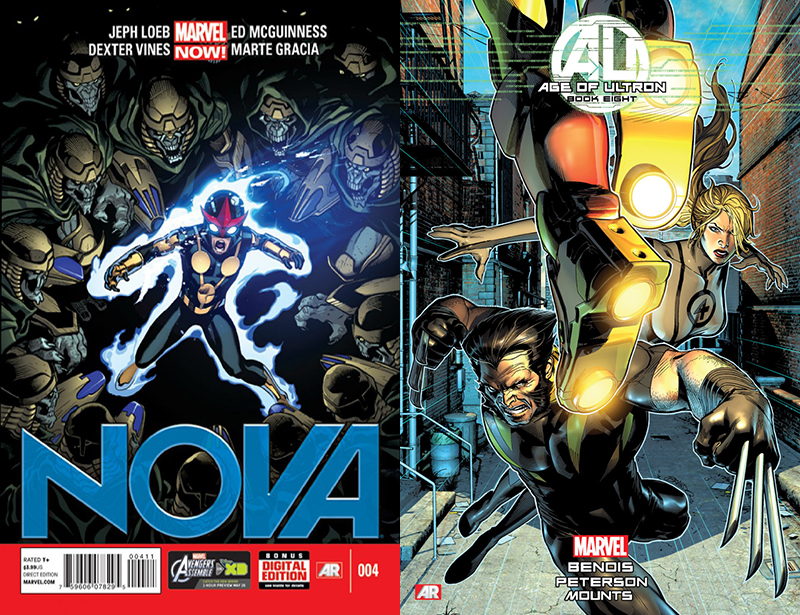 There are 2 issues left until the end of Age of Ultron and we’re no closer to finding out what the hell is happening. This issue is the calm before the storm and I didn’t even know that there was a storm on the horizon. I liked that we got a better understanding into the view of this alternate history war. Iron Man and Colonel America are at odds with each other, they’re not enemies, they still fight on the same side but they aren’t friends either. The Avengers are no more, that’s why Colonel America’s team is called The Defenders. We don’t know much about the Fantastic Four and what happened with the mutants, all we know is that there are some left but other than that not much else. We get the interrogation of Wolverine by Iron Man and I think this was the best scene in the comic. Iron Man can’t buy that this history he’s living in is an alternate one and thinks it’s a plan to trick hi from Morgana Le Fey. But during this scene they get down to the nitty gritty and I love that Wolverine isn’t making himself a martyr or a hero. He says he did what needed to be done. He’s not proud of himself and if there were smarter men around then he would have taken their advice and done what they suggested, but there’s no Reed Richards and Tony Stark, if you remember the first few issues of Age of Ultron, was a beaten down man with little to no hope left. Now about this battle with Le Fey, I don’t know where this fits into the story of Age of Ultron. I don’t know if there’s going to be this big reveal. I like that we’re getting something happening in this time line and not just dealing with the aftermath of what Wolverine did, but at the same time with 2 issues left I’m expecting something grander.