Hey Comic Impact! This week you’ll get the top 5 but I’m sorry I won’t be diving into any of the issues in too much detail. This weekend was a busy one with my father visiting us from New York and also I had some personal things to deal with, and I’m not going to lie, I’ve been trying to watch a lot of Arrested Development. So instead this week I’m going to talk briefly about each issue and why I picked it but if you want to more detailed and deeper discussion on these books please check out the Pick of the Week podcast for May 22, 2013. 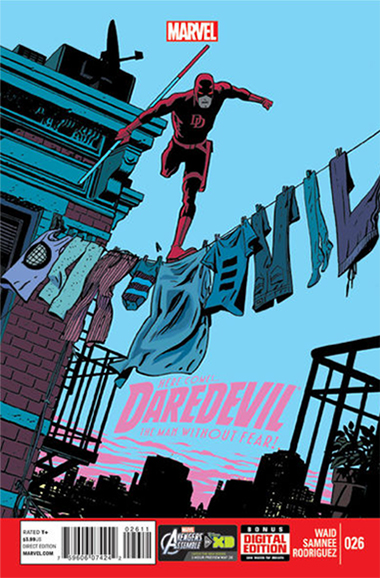 Daredevil #26 by Mark Waid, Chris Samnee, and Javier Rodriguez [Marvel]
This issue reveals the mastermind behind all of the hell that Matt Murdock and Daredevil have been put through since the beginning of the series. I’ve you’ve been reading my column from the start of the year I actually gave a pretty detailed reason why I thought who was behind the iron casket. I had a theory and I supported it and it turned out that I was right. I don’t want to brag but I feel like I have to because it’s the first time that I’ve done something like that. Read and issue and picked out clues to support my theory. I wasn’t disappointed in the reveal at all, I thought it worked well and I loved the scene where Matt and Foggy are trying to figure out who could be fucking with Matt do badly.

I also have to note the backup story where it’s essentially a look into Foggy’s brain and how he’s dealing with his cancer and how he sees Daredevil. It’s a really nice look at their relationship and what Matt means to Foggy.

Uncanny X-Men #6 by Brian Michael Bendis and Frazer Irving [Marvel]
This issue is filled with amazing and beautiful art by Irving. Irving’s art always stood out to me and it’s really cool to see him doing work on an X-Men book. His depictions of the underworld are just grand in scope and he composes such a great feel into the comics that he draws. There is a sense of setting in his art and it’s spectacular.

Another reason I liked this issue was because of the reveal at the end. Maria Hill is talking to someone about joining Cyclops team as an undercover agent. When they showed who it was I was pretty excited. This character has become someone I’ve really enjoyed reading over the last year and they were in one of my favorite comics until that particular comic was cancelled. I’ll leave you to figure out who and what or listen to Pick of the Week where we totally spoil the reveal.

The Superior Spider-Man #10 by Dan Slott, Ryan Stegman, and Edgar Delgado [Marvel]
Two things for this issue, remember a few months ago an issue of Superior Spider-Man ending with a reveal that the Green Goblin was back and watching Spider-Man? Well this issue catches up with the plans of the Goblin who now goes by Goblin King. He’s been building an army, from the remains of henchmen who don’t have a leader anymore thanks to their bosses being captured by Spider-Man. If you’ve seen solicitations for upcoming stories in this book you might have an idea where this is heading. If not, enjoy the ride.

The second thing, thank you for Carlie Cooper! I love that this character is still on her mission to find out what the hell is happening. I like that other characters are finally noticing huge changes in the character of Peter and that it isn’t being brushed off anymore and I love that Carlie is the one leading this one woman brigade to seek the truth. To be honest I wish I had more time to dive into other awesome things going on in this issue, but hopefully next time. 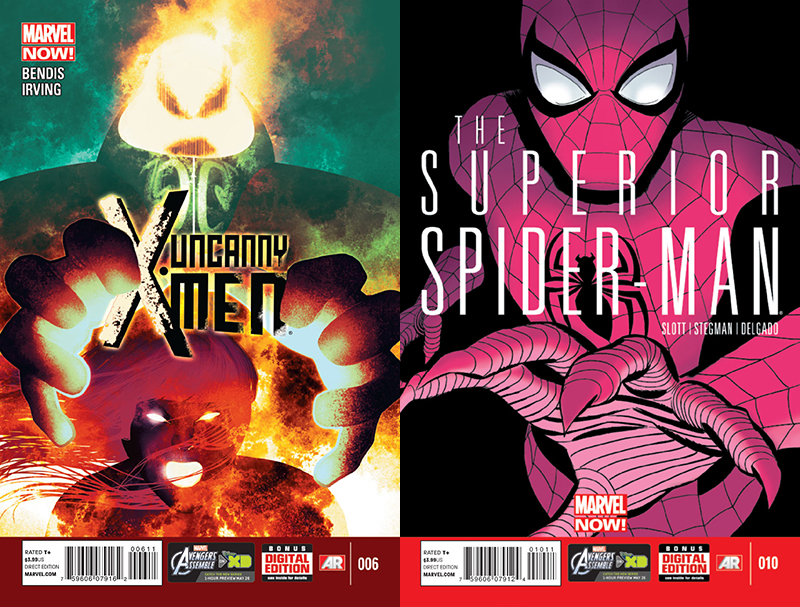 Uncanny Avengers #8AU by Rick Remender, Gerry Duggan, Adam Kubert, and Frank Martin [Marvel]
I’ve gone on record multiple times already stating how much I have been enjoying Age of Ultron and how much I’ve been enjoying Uncanny Avengers. This issue brings both things together to tell a story about the Apocalypse twins in a possible future, that future being the Age of Ultron one. In this issue you get a story about how the Twins grew up and how Kang guided them in their upbringing, let’s just say it wasn’t good.

The other thing this issue did was answer the question I asked awhile ago about what happened to the mutants in this Age of Ultron world. Well we find out that Havok and Rogue are married and that they lead the mutants who are living in the sewers and call themselves the Morlocks, and it’s all very fitting. It doesn’t surprise me that mutants are still being looked down upon here and I like that Marvel and the creative team took their time to tell this story and explain the mutants in this timeline, but I’m also thinking that we won’t be see much of them again, at least in this time line. But this comic works very well as both an Age of Ultron tie in and a way of continuing the story in the main Uncanny Avengers book. 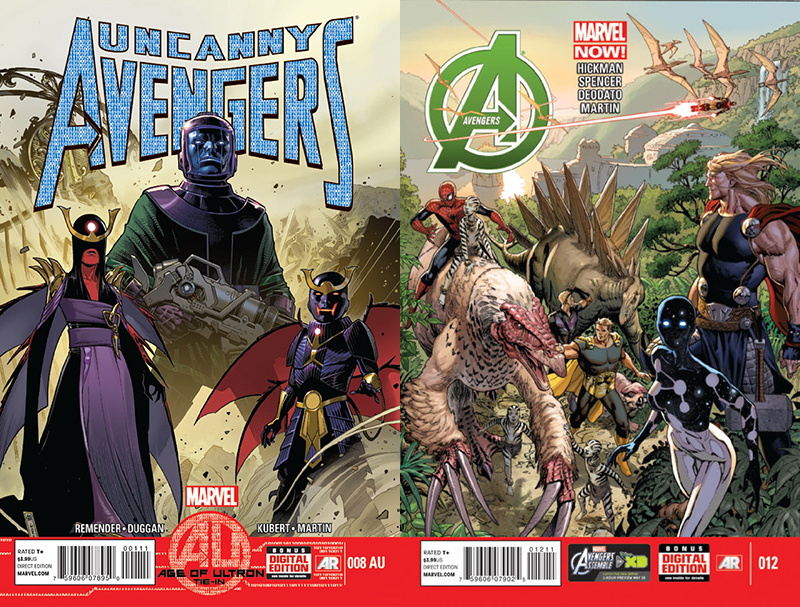 Avengers #12 by Jonathan Hickman, Nick Spencer, Mike Deodato, and Frank Martin
A different group of Avengers are sent to the Savage Land to teach ideas and other things to new life forms that might not know any better. This issue is Hickman going science and at the same time philosophical. There are a lot of ideas about fears or knowledge that we gain as we grow up that we should know about because it helps us survive but when a new life form is born and they grow fast and don’t need all the things we need to survive, how does one teach experienced knowledge? I don’t know but The Avengers is a good place to start.

There’s also a scene where Thor and Hyperion talk about humans and memory and immortality which is something that I’ve been enjoying about Thor: God of Thunder and I’m glad to see Hickman give his take on it and maybe see if it doesn’t fit into this Infinity comic that’s coming out in a few months.