LOVE, EXCITING & NEW … COME ABOARD, WE’RE SMASHING YOU
(or It’s a Nice Day for a Green Wedding) 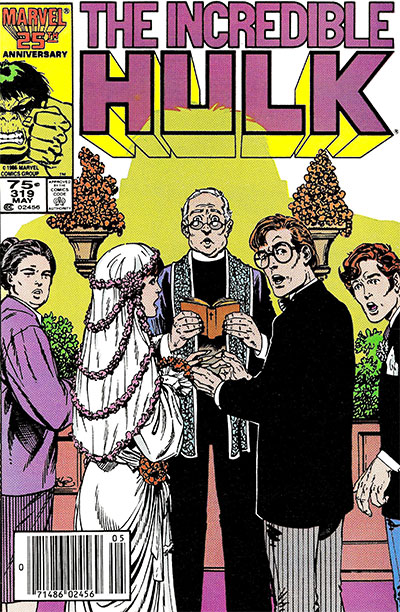 Weddings are happy, celebratory affairs which bring two people – as well as their friends and family – together in flamboyant ceremonies with traditions that vary in outlandish, gleeful ways. In the realm of super-hero comic books, the occasion of a wedding often involves the invasion of deadly enemies who want to ruin the party or take out the lovebirds, all without an invitation for either themselves or their plus-one. Reed Richards and Susan Storm had to deal with Doctor Doom, Puppet Master, The Red Ghost and a host of other villains in Fantastic Four Annual #3, and Magneto tries his darndest to ruin the big day for Scott Summers and Jean Grey in X-Men #30. So, why should it be any different for the mightiest mortal to ever walk the earth, The Incredible Hulk? (I know what you’re thinking: why am I doing a Hulk column again so soon? Well, the last was a TV show adaptation and this is regular comic book continuty. Now, enjoy your coffee and read on, my friend.)Well, a wedding is exactly where we find the lovable green lug in today’s Comics & Coffee, true believers! Or DO we? Robert Bruce Banner has struggled for years to cope with the affliction of his gamma bomb exposure as he shares his existence with the monster men call The Hulk. How, then, could he possibly get married and subject his bride to the same curse? Fellow scientist and gamma-fueled powerhouse, Doctor Leonard Samson (known as Doc Samson), developed a method to separate Banner and The Hulk within a nutrient bath, successfully splitting them into two distinct beings. Thus, while The Hulk was mindlessly tearing his way across the New Mexico desert, Bruce was finally free of the monster and able to get on with his life. He wasted no time at all before popping the question to his great love, Betty Ross, and the nuptials were planned with extreme haste. Now that he no longer transforms into an enormous green rage monster, Bruce and Betty can expect a perfectly normal ceremony without all the danger and chaos of a typical super-hero wedding, right? Well, can’t they?

After nearly six years on the title, writer Bill Mantlo traded places in 1986 with John Byrne, writer and artist of Alpha Flight. They just switched books with each other, simple as that. Byrne had big ideas for the jade giant; ideas which never bore fruit because he quit the book six issues later. His first issue on the title had The Hulk facing several of his old enemies (supposedly for the final time): MODOK, Leader, Abomination, Juggernaut and Rhino, before he threw the beast into Doc Samson’s nutrient bath. Once separated, Byrne was going to bring The Hulk back to his “roots”, such as he appeared in the original six issues in 1962-1963, through a series of complicated acts, followed by the creation of a rogues gallery better suited to the green gargantua (at least, better suited according to Byrne). While The Hulk had been written for many years as a big, dumb hunk of pure anger, the “true Hulk” was going to be reborn as a malevolent force who skulked in the shadows and expressed the darker side of Bruce Banner’s personality. An interesting idea, but we’ll never know how it would’ve unfolded because Byrne was gone before his plan could be put into motion. What he achieved in such a brief period of time, however, had permanent impact on the character and it all culminates in this issue.

While the wedding party prepares for the happy affair, Banner’s recently formed team of Hulkbusters confronts the animalistic monster to eliminate the threat of his endless rage for all time. John LaRoquette and Craig Saunders pilot a hovering tank and weaponized armor, respectively, and the green goliath requires very little coaxing to engage them in full-on battle. Without Bruce Banner’s subconscious to temper his anger, The Hulk has no limit to his destructive capability and no ability to reason, speak or do anything besides follow his instinct (which is, of course, to smash). The Hulk punches a hole through LaRoquette’s ship and holds on for the ride as the pilot tries desperately to shake him loose. His cohort, Saunders, hesitates in trying to blast the Hulk free of the craft because he worries that a missed shot will bring down his friend in a fiery explosion, killing his friend like one of their team was killed in the previous issue.

As the battle rages on, Rick Jones, the Hulk’s erstwhile sidekick, arrives at Gammabase to take his place as Bruce’s best man. The two catch up on old times while Bruce gets his tuxedo finished, just in time for the ceremony! While Bruce is pretty much a stick-in-the-mud the whole time, it’s easy enough to attribute his ambivalence to pre-wedding jitters. Back at the battle, Doc Samson has managed to track down The Hulk and jumps into the fray, successfully dislodging him from the hovercraft and saving LaRoquette’s life. There’s not much teamwork between these combatants, since LaRoquette blames Samson for his teammate’s demise, but they manage to get in a fair amount of shots to keep the Hulk reeling. When Samson manages to stun the man-monster, LaRoquette takes the opportunity to seek revenge by blasting the green-haired superman in the back. The Hulk’s rage continues to build, however, and he doesn’t stay down for long, leaping at the craft once more and shredding the metal hull in his effort to get at the man inside.

“Dearly beloved…” begins the chaplain, and so begins the proceedings and sharing of vows. Betty looks beautiful in her pink-adorned wedding dress and is accompanied by her maid of honor, absent Hulkbuster Hideko Takata. The members of the wedding party are the only attendees of the ceremony, and consist of the bride, groom, best man and Ms. Takata. A pair of “I do’s” and sharing of rings later, and the holy man offers the world it’s final opportunity for opposition with the traditional words: “If there is anyone who knows for any reason why this man and this woman should not be joined in the bonds of holy matrimony, let him speak now or forever hold his peace!” It is then that a pistol is raised and pointed right at the happy couple, accompanied by the exclamation “STOP!” 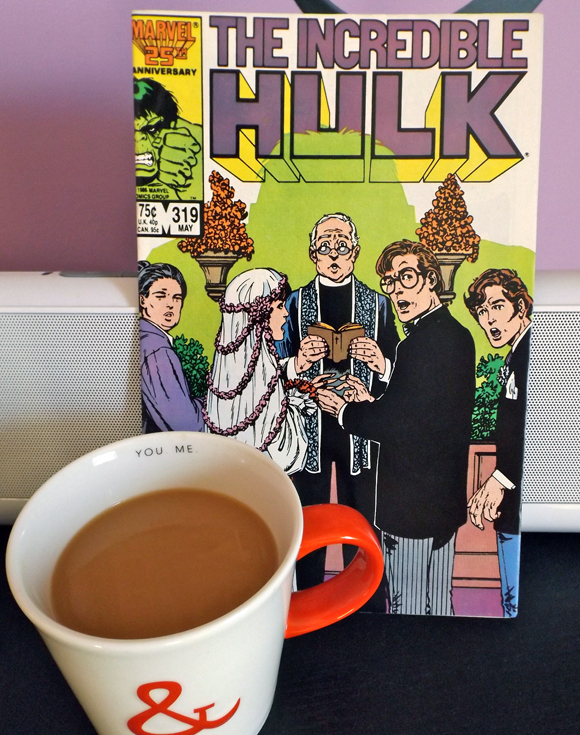 The Hulk’s furious fragmentation of his flying foe’s craft nears its fatal finale, and he is but seconds away from flattening LaRoquette into a frittata. Saunders pleads with Samson to save his friend, finding nothing but resistance where the two enemies have no reason to stick either of their necks out for the other. “You’re supposed t’be some kinda super-hero,” Saunders muses, “Jest ‘cause y’all don’t get along with LaRoquette ain’t no reason t’let th’ Hulk add another life t’his tally. Less’n yore REALLY what Rocky (LaRoquette) says y’are…!”. Back at the Gammabase chapel, the weapon and mysterious voice belong to Betty’s estranged father, former Army General Thaddeus “Thunderbolt” Ross. “I won’t let my only child make this horrible mistake. Now step away, Banner!” he demands, all while Rick skulks his way around to the side of the chapel, ready to lunge at and disarm the older man, yelling “No ya don’t, Thunderbolt!” Betty’s father reacts to the sneak attack, spins as quick as a man half his age, aims his pistol straight at the best man, and fires into Rick’s abdomen point blank!

After being companion and sidekick to The Hulk, Captain America, Captain Marvel and Rom, is Rick about to lose his life to an old man’s bullet? Bruce and Betty are astounded by Ross’s maniacal action, and Betty gives her father “both barrels” in a verbal offensive which culminates with her grabbing the barrel of his gun and putting it right up on her chest, demanding that he shoot HER if he’s so determined to kill the love between her and Bruce. As usual, I’m not about to give away the ending to this high-anxiety affair, but it’s definitely a high-octane brouhaha worth every penny of the 75¢ cover price. This isn’t the only wedding in the Hulk’s history, however. So, when you finish this issue, make sure and track down the marriage of Betty Ross to Glenn Talbot in Incredible Hulk #158, the joining of Rick Jones to Marlo Chandler in Incredible Hulk #418 and Bruce and Betty’s ORIGINAL wedding in Incredible Hulk #124. These joyous occasions are accompanied by some wild appearances by super friends, guests and enemies alike. And while not all these weddings result in “happily ever after” for the brides and grooms, they deserve a place right next to your favorite dark roast. I now pronounce you sugar and creamer; you may kiss your cuppa. Fare Thee Well!

The Incredible Hulk #319 is written and penciled by “Jocular”John Byrne (X-Men, Fantastic Four), inked by Keith Williams (The Phantom, Superman) and colored by “Handy” Andy Yanchus (Alpha Flight, Galactus), and was the final issue of Byrne’s six-issue run on the title before going to DC Comics to revamp Superman in The Man of Steel. Many thanks for Gary M. Miller for much of the background information contained herein.