CAN YOU HUG YOUR DAD IF YOU CALL IT A FULL NELSON?
(or There’s No Better Father’s Day Gift Than Asgardian Love) 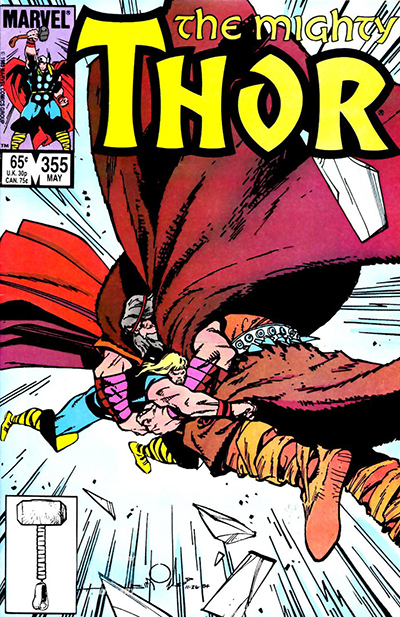 When a combination writer/artist decides to take a break from one or both duties on a title, the fill-in work sometimes is a disaster, but in certain cases is a pleasant surprise. Following the Casket of Ancient Winters story arc (Thor #350-354), Walt Simonson relinquished his artistic duties for a spell and let the God of Thunder recover from his recent adventures before rushing off to the next crisis.

“The Icy Hearts” is subtitled as “My Dinners with Thor!”, which seems like it might be a series of heart-to-heart conversations, which would make for a strange super-hero comic book. The cover, however, implies otherwise. Our first impression is a action shot by Walt Simonson which features the Odinson grappling with a figure three times his size, their enormous capes flying across half of the page with some kind of clear shrapnel exploding in our faces. Who is Thor fighting? He has gray hair, so it’s an old giant? We don’t know, but the first panel inside shows us a silhouetted being who must assuredly be the foe from the cover! He hovers nearby the unconscious God of Thunder, who slumbers near a flaming fire pit as the imposing figure watches. But wait, what’s this?! We clearly see the giant’s hand penetrating the shadows and it is holding what cannot be held – Mjolnir – Thor’s enchanted uru hammer!

What trickery be this? His size must give him tremendous strength, but even The Incredible Hulk’s matchless might could not lift that which he was not worthy to wield. And yet, the giant flings Mjolnir into the air and catches it again with ease, musing “The dwarfs made well this magic hammer… a true servant against all that is evil.” His internal monologue gets interrupted by the waking of Thor, and he places the mallet upon the table next to the bed so that it is nearby when Thor becomes conscious. Regaining his senses, Thor recalls how he saw Odin die during his recent battle against the forces of Surtur and that he, the Son of Odin, should have also died soon thereafter, stranded in the northern reaches of Asgard. He notices his host nearby and the introductions begin. He’s a mysterious old man who sits using a crude mallet and chisel to sculpt beautiful animals and people out of large blocks of ice. He then brings the ice figurines to life by breathing his essence into them (an idea suggested by fellow Bullpen denizen Chris Claremont), causing great amazement in Thor (more on this later). Despite his restful slumber, Thor is weak and injured from his recent battles, yet the large old man demands that Thor wrestle with him before they dine together, a touch that rings of ancient myths and legends, and by protocol Thor cannot refuse. As Thor’s recovery progresses in the following days, he gets stronger and more capable of grappling with his opponent, suggesting that Thor might be a guest, but he cannot leave so long as he cannot defeat the old man. But his first contest goes poorly and the giant slams Thor into the floor as easy as if he were a small child.

The two dine while we check in on some of the other Asgardians, all who played various roles in the battles of previous issues. Beta Ray Bill and Sif tour the streets of New York City in what was always destined to be an unrequited romance, but the Warriors Three seek new dangers and thrills in the mortal realm! But, ho, what appears yonder? “Some great mead hall that fair begs us to enter and grant its host the honor of our presence” observes the voluminous Volstagg as he spots a Macy’s department store. The Warriors Three are amazed upon entering as they see aisle upon aisle of cooking utensils without a single sign of food. However, their thirst and hunger pause when Volstagg sees the wonder that is non-stick cookware. He ponders acquiring some of these miracles so that he no longer has to fear doing the dishes back at home. At the same time, Hogun the Grim examines kitchen knives, thinking “A well honed blade, but badly balanced for throwing.” Keep working on this, Wusthof.

Back on Asgard, the conversations continue in the northern “arctic”: polar bears turning seals into dinner, the giant (named Tiwaz, we learn) drawing analogies to the cycle of life and death. Odin died in the battle of the previous issue and Thor is overcome with grief, so this situation helps Tiwaz provide some small comfort to Thor in coping with his father’s passing. Thor begins to suspect that Tiwaz may actually be Odin in disguise, since Mjolnir made it back to the old man’s sanctuary from where Thor fell last issue. “No one can lift Mjolnir in the Golden Realm save only my father!”, to which Tiwaz replies that his unliving ice sculptures carried it back from the avalanche where Thor was found. This statement may be true for all we know, since we only saw Tiwaz wielding Thor’s hammer inside his hidden domicile, not carrying it during the journey home. So while he is truthful on a technicality, Thor’s suspicions arise again when he sees Tiwaz breathe upon his latest ice sculpture. “You … you brought her to LIFE! Only my father has the power to do such wonders.” Tiwaz admits nothing, however, pondering whether he “but released the life that was already within the figurine.” Thor’s final accusation is proven false when Tiwaz points out that all of Odin’s disguises, now matter how deceptive, all “saw with but a single eye…and I see you with TWO.” The Thunder God wants so much to believe that his father was still alive, but his disappointment is tempered with the old man’s kindness each time Thor’s hopes are dashed.

Thor continues to regain his strength as the days pass, wrestling Tiwaz each night for his supper and discussing the loss of his father. Tiwaz confesses to have known Odin well, even to have once been one of the sky gods himself. Before retiring to the icy tundra, Tiwaz ruled as Odin did, finding the job tiring and desirous of freedom. Thor is confused and frustrated, realizing how much of his father was a mystery, illustrated by the conflicting stories of the Allfather’s origin Thor learned over many years. Despite learning of one genesis from Odin himself and another from a great floating eyeball (Thor #294), Tiwaz helps the Thunderer to realize that it is Thor’s love for his father, and Odin’s love for his son that mattered above all else. Any other considerations are immaterial by comparison, and Odin’s death is as honorable as was his love for his family during life. By now it is time once again to wrestle for dinner. Thor’s strength has recovered, the “bloom hath returned” to his cheeks, and so with as mighty of a struggle as the two gods can muster, Thor catapults Tiwaz overhead and onto the floor, much to his elder’s delight. “As good a match as I’ve had in many and many a year!”, he cackles in joyful laughter. 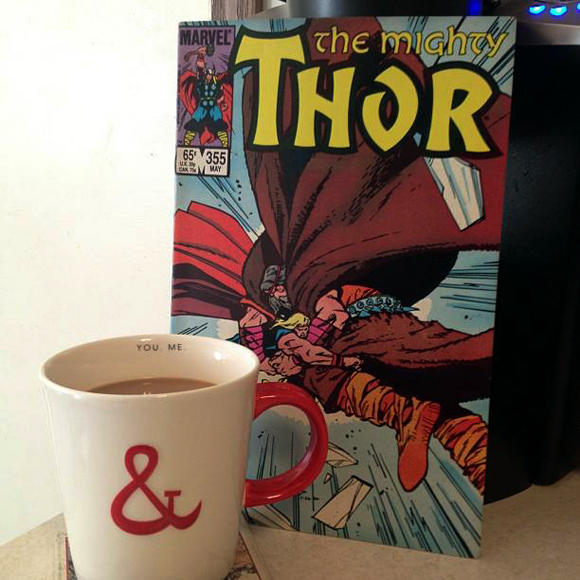 Their last meal together comes with one final lesson. Tiwaz quotes from a “great book” filled with words of “a wonderful poet of Midgard”, reciting “To every thing, there is a season, and a time to every purpose under Heaven. A time to be born, and a time to die. A time to kill, and a time to heal. A time to mourn, and a time to dance… wise words.” Thor is rankled by these writings, questioning what mortals could possibly know about the sorrows of gods. Tiwaz is quick to point out that mortals know more about death than gods because they live with it stalking them each and every day. It is then that Tiwaz’s figurines finally choose to speak, telling Thor how even though their lives are but a day, they dance and play, enjoying the cold of the cavern and the warmth of the fire even in their brief span. “Surely your father [Odin), for all his cares, enjoyed the cold and the warmth and many sunrises?” As the figurine says its final words, it melts in the great hand of Tiwaz, completing its life cycle. Thor realizes that life does not end because of grief, but his responsibilities continue – particularly as the guardian of Midgard – and Odin would only want his son to heal, live honorably and experience the joy there is to living. The two gods part then as friends, grateful to each other for what each has given and received during their time together and certain that their lives are much enriched for the experience (and since Thor has finally out-wrestled his host, he may now leave as a better man, or so is implied). In the final panel, we learn at long last why Tiwaz was able to lift Mjolnir and how he knew so much about Odin and the lives of sky gods… he is Thor’s great-grandfather.

Sal Buscema is not to be outdone in his artwork here. In fact, editor Ralph Macchio comments in the letters page how Buscema is “producing some of the very best work of his career.” While his facial expressions, dynamic movements and physical positioning of the characters are as beautiful as ever, it’s his attention to detail that really blows me away. The first time we see Tiwaz in the light, his foot coverings look like real animal skins wrapped around his feet and held together with leather straps which produce bulges that stick out between the straps, demonstrating how such a simple concept looks amazing in a talented artist’s hands. There is no shortage of inconsistencies in Thor’s universe, but only comics fans will notice them. For example, he fought side-by-side with Beta Ray Bill and Sif in the cold depths of space many issues ago, yet the snow-covered plains threaten to chill the life from Thor? However, this story is less about Marvel continuity and more about the characters, the myths and the cycle of life, and it is told with considerable heart by the talented Walt Simonson, who is currently doing pencils on Marvel’s title starring a certain green goliath. Following this issue, we are told that the upcoming story features not Thor, but the Prince of Power, Hercules, and is produced by Bob Harras, Jackson Guice and Bob Layton (which just happens to be the issue featured in one of my first Comics ‘n Coffee columns for you more recent arrivals). Coincidentally, the final thing we see in the comic is a small advertisement for the Marvel Graphic Novel, Swords of the Swashbucklers, a heckuva book by none other than Boisterous Bill Mantlo and Jackson Guice! As much as that image inspires me to pick up the subject for my next column, however, I’ve suddenly run dry in my coffee cup. Therefore, it’s time for a refill, true believers. Fare Thee Well!