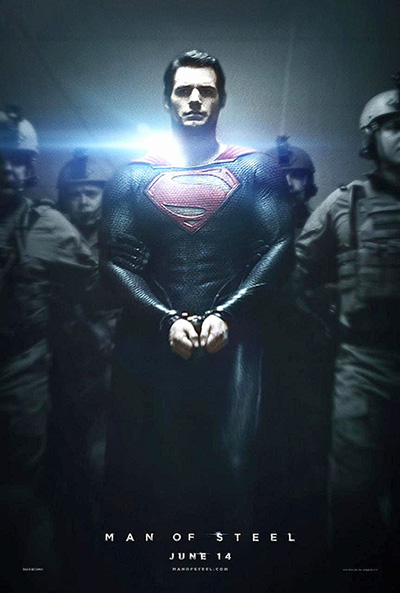 There will be spoilers, so you’ve been warned.

I’ve the majority of the day to think about this film and what I thought about it. Before we get into that, I want to say that this isn’t so much as a review as to what I liked and didn’t like about the film. I’m not a profession critic but I consider myself a student of film and discussing films and looking at them from different angles and taking them apart is something I enjoy doing, but I can’t do that without giving reference to you about my feelings on the director and the character of Superman.

Superman isn’t a character I grew up liking, let alone reading in the comic’s world. I was always a Batman kid, still am as a matter of fact, and always will be. I’ve always thought that Superman had too much power and there was no way to humanize him, I mean, how could you? He has the power of a God and he’s not human. Most of my knowledge on Superman was watching episodes of the Animated Series and Lois and Clark and later in high school Smallville, which I stopped watching after season 2. In the comic world most of the Superman comics that I read were modern takes on the character. Mark Waid and Leinil Yu’s Superman Birthright, Kurt Busiek and Stuart Immonen’s Secret Identity, Mark Millar’s Red Son, and Brian Azzarello’s and Jim Lee’s Superman run, and some of Geoff Johns and Gary Frank’s Superman run. All of which I enjoyed, mostly because a lot of those comics were so different than what I knew Superman to be. They were different takes and twists on the origin that we’re all familiar with. But even then I the character didn’t always grab me, and this includes the recently launched Superman Unchained by Scott Snyder and Jim Lee. I thought it was a fine comic, but at the end of the day, I just don’t care about Superman the way I do about Batman or Spider-Man.

Zack Snyder has directed one of my favorite movies of all time in Dawn of the Dead. We’re not here to debate slow versus fast zombies, but I’ll fight anyone who hates on this movie. Man of Steel is Snyder’s third foray into the comic book film world. His first 300, is just an epic and highly entertaining film. His second, Watchmen, is a mixed bag, depending on who you talk to about it and what they think. Real quick, my opinion was that I hated it when I saw it theaters, but after seeing it again recently, I’ve come to better appreciate it. But this was the movie that got people to start doubting Snyder as a director and his next film Sucker Punch, was for most, I can’t stress enough that I’m not speaking for everyone, was not only a box office failure but also kind of a mess of a film. I’ve seen it, I like the idea a lot but the execution was really bad in my opinion and as much of a passion project of his as it was, he should have at least gotten some help from a better writer. When I heard that Snyder would be directing this film I was hesitant but at the same time I also thought, hey, at least we would be getting some cool fight scenes and action set pieces.

That’s enough background, on to Man of Steel. I’ll say this right off the bat, I liked it a lot. For a two plus hour movie it moved pretty fast and I didn’t feel like I was in my seat for all that long. I like experiences like that when I go to the movie theater because I am a huge fan of going to the movie theater. But now I’ll mention the parts of the movie that I thought were done really well. 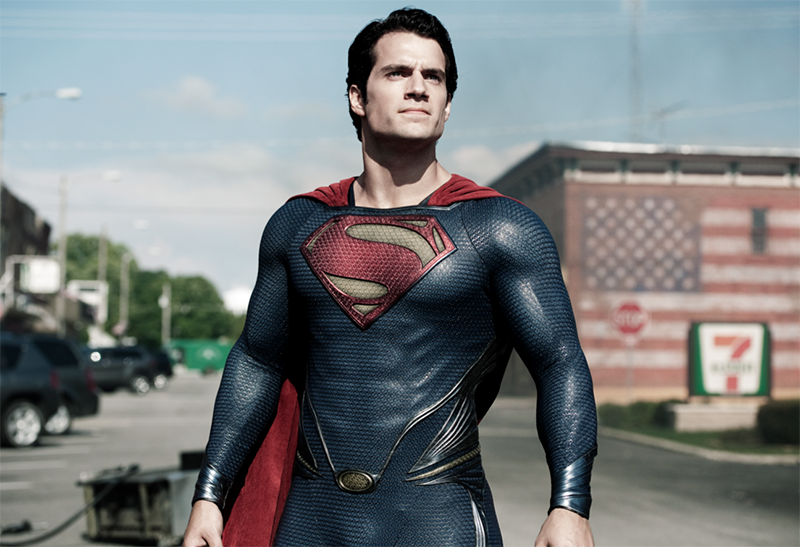 First off, the cast in this film is fantastic. Henry Cavill as Kal-El/Superman was a fantastic choice. He totally looked the part of Superman. He pulled off the Clark essence at the end but unlike Brandon Routh and (sorry) even Christopher Reeve, Cavill looked like what I’ve always imagined Superman should look, tall, handsome, powerful, and strong, but at the same time vulnerable and conflicted.

I loved Amy Adams as Lois Lane. Amy Adams is one of my favorite actresses, she is amazing and I knew that she would bring everything that makes Lois Lane a strong woman. One scene in particular that stood out to me was when she was being yelled at by Perry White for leaking her article that the Daily Planet wouldn’t print. That scene would have had both characters yelling at each other and fighting about the article and principal but it wasn’t that at all. It was subtle and Lois was okay with getting yelled at for her actions and not blaming Perry for having to suspend her for leaking the article because it wasn’t about that, but because it was about the story and what she believed in and her morals as a journalist.

The rest of the cast was great as well. Jor-El was beautifully handled by Russell Crowe. I’ve never really seen him in a movie where he was so reserved as an actor. His actions and motivations as a father having to make an unthinkable decision just incredibly handled. Kevin Costner was a surprise as Pa Kent as I wasn’t expecting much out of that role but I thought his relationship with Clark and raising him was really well handled, even though the way Pa Kent went out wasn’t the best movie decision.

Michael Shannon as General Zod was a welcome in the insane kind of villain. He was so reserved at times but his anger and yelling was out of desperation and anger was a lot of fun. It was strange to see a character so insane right off the bat without much build to it, but his acting made it look like he was having a great time with the role. I will say that it did come at times that he was playing it a little over the top but his lines about being a soldier and being made that way was a good enough answer for me in regards to his actions. 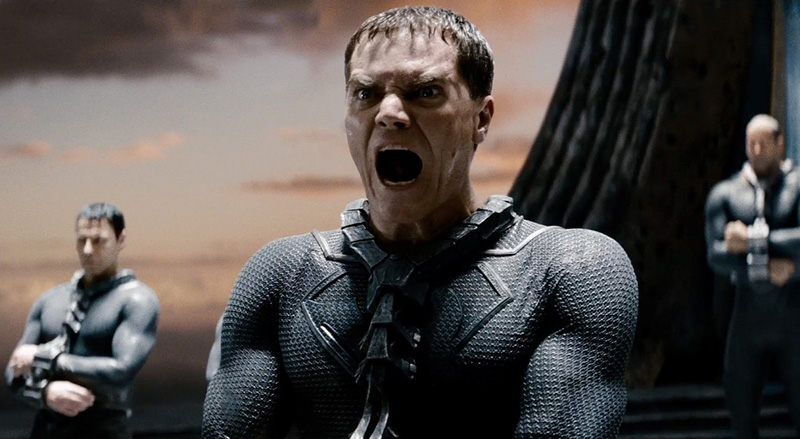 The rest of the cast was great as well. When you have names like Diane Lane, Laurence Fishburne, Christopher Meloni, Richard Schiff, and Harry Lennix I’ll be a happy camper. I’m a sucker for great and noticeable supporting casts and this was definitely one of the best that I’ve seen in a while.

The overall story told in this film is what really grabbed me. This is one of the first stories I’ve seen about Superman that not only grabbed me at the emotional level but also humanized Kal-El/Superman in a way that I’ve never seen before and it made for a fascinating story. I like his struggle with his anger over the people of Earth. It’s something I think everyone shares in this time, I know I do. You can’t help but look at everything that’s happening on our planet right now and not think do we really deserve to be saved or even helped. I liked that we were shown the bad and the good. And I loved that he went to talk to a priest about it, not that I’m religious in anyway but I think it was a nice touch and I liked that the priest told him that believing in humanity was a leap of faith. I loved the character journey.

With all the praise I gave the film there were some things that I took issue with, but I will say they did not stop me from enjoying the film but it’s something that I hope the filmmakers take into consideration for the next film. To me, the major issue I had with the film was the complete and utter lack of concern for the buildings and property when it came to the fighting. The amount of destruction was just gratuitous. I don’t think there needed to be that much destruction in both Smallville and Metropolis. Heck, even Pete’s IHOP was destroyed. I know there were some buildings left standing in Metropolis but still, how much of that city was just completely and utterly destroyed. Too much, and I could have forgiven some of the destruction if it show cased Superman doing what he does best and saving people’s lives while in the middle of a battle with Zod. I felt that was missing, which to me also lacked in the suspense and need for Superman to snap the neck of Zod, if there were a few more scenes of Superman saving people it would have added more importance to that scene. I literally thought to myself that he wasn’t saving anybody throughout the battle and was left to assume that thousands if not millions of people died.

Smaller items that bothered me include the death of Pa Kent. I understood why it happened but how it happened was handled badly in my opinion. I don’t know how to fix it but that was something I felt needed a little more time to be worked on. I also didn’t understand the gender swapping of Jimmy Olsen. I’m not against the gender swapping of the character I just thought that the character was so inconsequential to the overall movie that it was kind of pointless to do that.

That’s all I have to say about the movie I think. Either way, I think I’ve said enough and I’m sure I’ll be talking about it on a podcast fairly soon, so stay tuned for that. I’d love for the discussion to go further than my thoughts and this review so please respond and let me know how you feel. Overall I thoroughly enjoyed the film and I’m looking forward to the sequel that will hopefully feature a certain bald character.