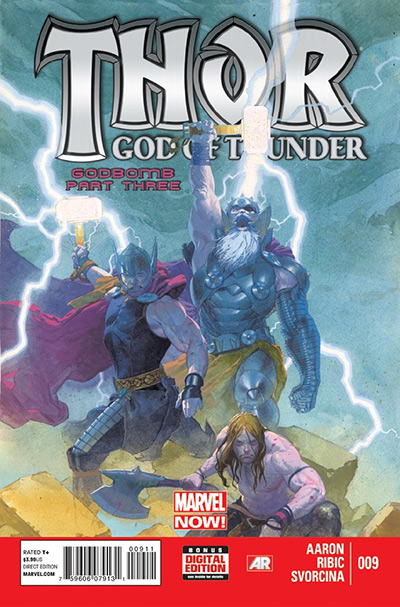 This issue was a surprise for me when I read it and it became my favorite read this week. I’ve sung the praises of this book before and I will continue to do so. What I’ve liked about this book is that it has quiet pensive moments of what it means to be a God and how that affects someone who is basically immortal. Another thing I’ve liked about this series is the fact that it’s a bad ass book and can bring the excitement and awesome battles like no other book can. This issue was just awesome and fun. I like the thoughtfulness that Aaron brings to the book but sometimes you just need some action and this issue brought it all. You have three different Thors from three different eras coming together to battle Gorr the God Butcher. They jump into battle, each with a different reason but all for the same purpose. Esad Ribic brings the grandeur that something like this needs and Jason Aaron seems to have a lot of fun with the writing. “Then struck Thor. With the fury of a billions storms.”

And the Thors brought it, like no one else can. They fight and the space sharks make another appearance, now with the ability to shoot lasers out of their noses. When it seems like the battle is over and the Thors have won the writing and the art take a literal dark turn and ends with one of the most scariest and bad ass lines I’ve read in any comic. “On the world of Gorr, thunder is heard. And then it began to rain. It rained blood. Godblood. Then it rained hammers. And Thors. And despair.”

I’m not going to talk much about this issue. All I’ll say is that it’s insane and that it calls back to a past issue to show us a new layer to things going on. I just want to mention a thing or two. If you recall me talking about East of West, you might remember me mentioning how badass of a comic book it is. Manhattan Projects is no slouch in that department either. All I’ll say is that I never thought in a million years, or when I started reading comics that one of my favorite comic book characters would be Albert Einstein. Who the hell could have predicted that? And who the hell would have thought that he’d be such a bad ass? A bad ass that has a chainsaw with E=MC2 written on it? I love this book so much. 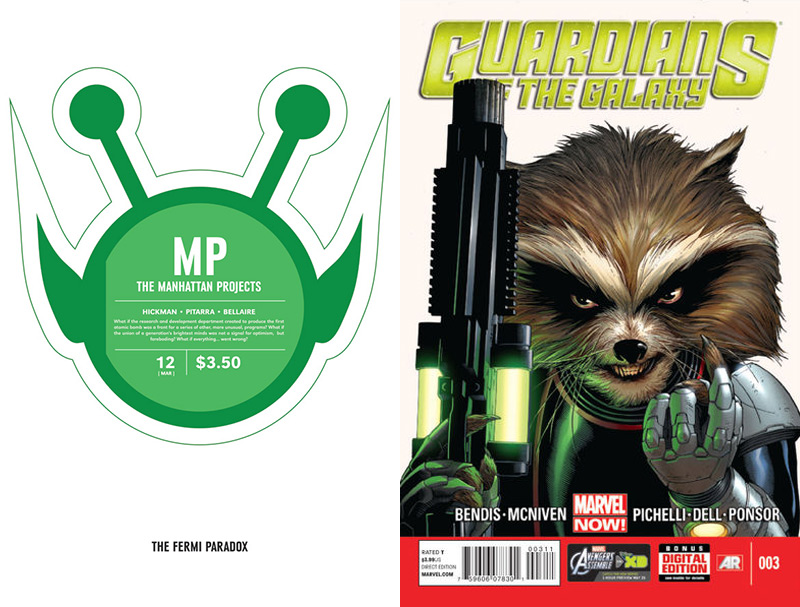 I’ve enjoyed this comic but it wasn’t until this issue that it clicked with me. I’ve felt that the first two issues were good but I wasn’t feeling it for whatever reason. This issue as I was reading it, I was getting more and more into and I couldn’t tell you why. But going back and looking at it and reading it I figured it out. It was those last few pages where Groot saves the team. The team stands there disappointed in themselves for being captured but moving on quickly and regrouping and coming up with a plan. They go into battle destroy some aliens and take over a Spartax ship. Then Star Lord, sorry for the wrestling references, pulls a CM Punk and drops a pipe bomb of a promo and the issue ends. That! That was what I was missing. Really cool team moments and with that devil may care attitude that they know will get them in trouble but they don’t care because deep down they believe it is the right and honorable thing to do. 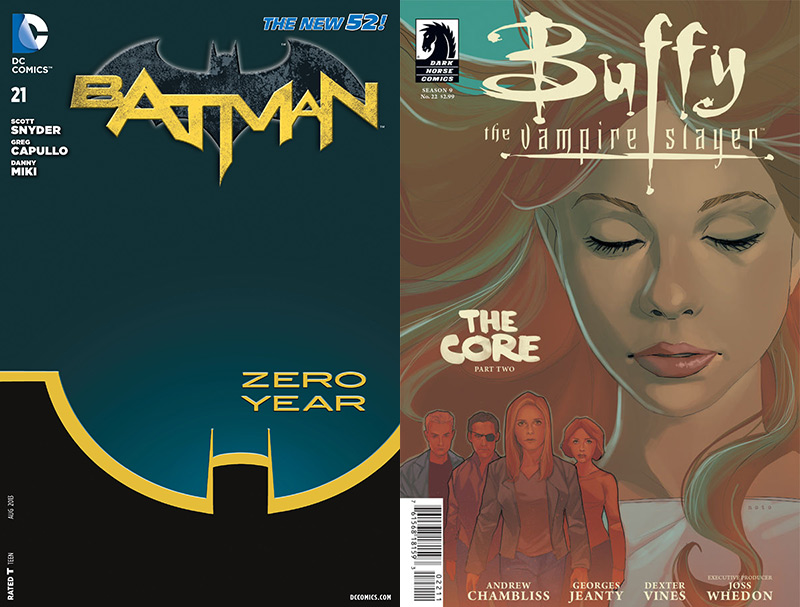 “Too many questions Mr. Wayne.” (I hope you get that.) So the first issue of the next great big yearlong story line in the Batman book starts off and it’s pretty interesting so far. It’s part one of eleven so I didn’t think we’d get any answers as to what is happening because we don’t know what is actually happening and all this issue does is raise questions and more questions. Or maybe riddles, who knows?

Anyway, there’s a lot of playing with the time line and not like what’s happening in Age of Ultron. What I mean is that we get glimpses to the past in this comic with no context. The book opens up six years ago and Gotham City looks like New York City in I Am Legend. Subway is underwater and buildings are abandoned and grass and weeds are growing everywhere. Batman shows up to save a little boy on his motorcycle. The boy tells him that he (we don’t know who HE is.) thinks he’s dead, Batman responds Mandarin style, “Then He won’t see me coming.”)

Then we flashback six months before the six years and everything looks pretty normal. Bruce Wayne is dealing with the aftermath of the #0 issue (remember that?) and the Red Hood Gang.

A majority of this issue also has a conversation with Bruce Wayne and his Uncle Phillip who is trying to get Bruce back at Wayne Enterprises so that he can run it. Bruce has no interest in doing that. Later it is revealed that Uncle Phillip is working with Edward Nygma. (YES!!! I’m very excited!!)

There are a lot of small things being hinted at in this issue or that can be seen as Easter Eggs. I’ll list the ones I see, but if I miss any I hope you point them out to me. I’ve already mentioned the continuity stuff. First of all so much an Easter Egg but there’s a reason that Snyder keeps using Gotham City as a character and driving force behind Bruce’s motivations, more so than the death of his parents, only by a little bit. I don’t want to make that big of an assumption. Bruce Wayne is living in Crime Alley, not Wayne Manor. That’s the first and obvious egg. Uncle Phillip is Uncle Phillip Kane, his mother’s brother. Bruce is related to the Kane’s. I don’t know if that comes from previous continuity but it’s new to me. We all know that Kate Kane is Batwoman. Bruce, his father (in a flashback) and another kid earlier in the issue are wearing baseball hats that have the Robin symbol on them. What they refer to, we don’t know, but they’re not isolated events. We have a giant penny sighting! Riddler’s cane sighting! Also, clearly those notes all over Edward’s office mean something, what they are, I couldn’t tell you. We also get young Bruce bringing one of those room scanning Prometheus balls to explore what will eventually become the Batcave. We also see Bruce drive up to Wayne Manor but not get out and leave immediately.

There’s a lot going on and a lot of questions and Easter Eggs popping up to make up think and speculate as to what it all means. I’m not a big fan of speculating but I love looking for those clues and thinking about what they mean. I’ll keep looking and you should keep looking and we should compare notes. I think we’re going to be in a fun ride with this arc.

I am saddened by the fact that in three months the ninth season of Buffy the Vampire Slayer will be ending. But I’m ok with it because I am happy that this book has turned into one of my favorite books but also one of my most anticipated. I’ve mentioned that fact before so I won’t go into further. I just hope Chambliss sticks around for season 10 and if he doesn’t then I hope they keep one writer on the book like they’ve done with Angel and Faith. One writer on the book with a guiding voice is better than a whole bunch of writers going off course. It worked on as a TV show, not as a comic.

This issue sees a couple of things coming to a head from the previous issues and from Angel and Faith, with regards to Spike. Spike returns and he talks to Dawn telling her Dawn stories and filling her up with hope. He tells her stories about how she helped change him and make him a better person/vampire bringing up moments from the show.

The other thing that comes out in this issue is the fact that Xander had other plans. I was worried about how this was going to play out. I know there are still three more issues but so far it wasn’t turned into a big deal. Buffy gets pissed but she pushes those thoughts out of her mind because she’s all business and she knows what she has to do save Dawn and now the world. I feel and hope that we get a scene with Buffy and Xander talking about this and really their whole lives. How much longer can they deal with all this crazy stuff before it just starts getting to them? Buffy is a different kind of superhero and she’s been doing this for so long how has this not affected her overall? I guess we’ll see but I’m looking forward to this finale.