ANOTHER APOCALYPTIC ANNIHILATION?
ARMAGEDDON TOO OLD FOR THIS!
(or If Your Can’t Stand the Heat, The Phoenix is Gonna Burn You Anyway) 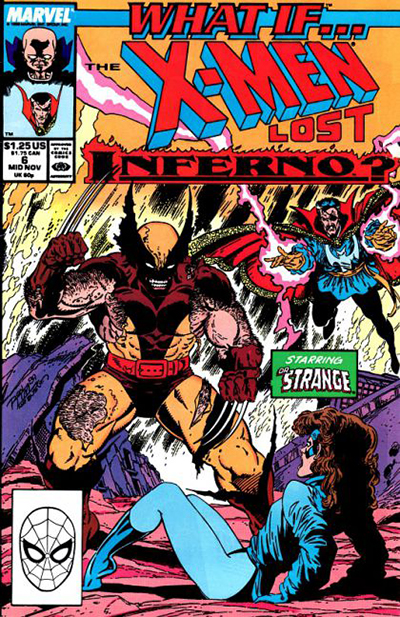 Some comic book events are abysmal duds, while others are revered by fans for all time. The names Crisis on Infinite Earths, The Kree-Skrull War, Secret Wars and Avengers Disassembled evoke strong memories and feelings, while Atlantis Attacks, House of M and Chaos War generally engender groans and eye-rolls. Some of the greatest events and cross-overs have come from Xavier’s mutants and their associated spin-offs, including Fall of the Mutants and the recent Avengers vs. X-men story. Once such cross-over was a complicated and dark tale which put teammates at odds, unleashed the darkest fiends of the abyss and threatened to consume all that was noble and good in our heroes in an unescapable shroud of evil. This was INFERNO, an event which spanned the pages of Uncanny X-men, X-Factor, New Mutants, X-Terminators and Excalibur, not to mention the effects which spread in a dozen other titles throughout the Marvel Universe. As all comic book events do, the good guys (spoiler) triumphed in the end and the world returned to its sense of normalcy until the next crisis inevitably falls upon their heads. That’s how it goes, unless we look at the story from a certain unique perspective. That is, if we search hard enough, we see a possible outcome of this story as things might have been, asking the most wonderful question in all of comics … What If?What If? #6 is from the second volume of this legendary Marvel Comics title and presents the question, “What If the X-men LOST Inferno?”, boasting a story “starring Dr. Strange” and featuring a malevolent-looking Wolverine bearing down upon a helpless Shadowcat (Kitty Pryde).

I didn’t buy every issue of What If? each month, but the striking and horrifying imagery on the cover, combined with the artwork by Ron Lim (at the top of my list of pencilers at the time), made this a must-read for me. In the main story of Inferno, demons from Limbo (although not the same Limbo from Rom comics, if you’re asking) try to take over the world, transforming New York City into a demonic state, raining down from a large teleportation disk over Times Square. Madelyne Pryor (Jean Grey’s clone) tries to exact revenge against Mr. Sinister and Cyclops, the mutants fight off the demons N’astirh and S’ym, and Jean Grey and Illyana Rasputin dispel threats from all sides to save the day. In the “What If?” universe, however, events transpire which do not purge the Earth of its demonic threats, but instead establish a state of permanence for the portal between Limbo and Earth, thus dooming the human race to a world overrun by evil.The craziness of this world keeps me, as a reader, in a perpetual state of amazement and wonder. Many of the buildings are tainted by demonic evil and, as such, have grown gaping maws with jagged teeth in a continuous scowl. Why are the buildings so unhappy? What do they eat? How do they acquire sustenance if they are still rooted to their foundations? The first scene of the story features Wolverine atop a cage being drawn by a team of possessed horses. Inside the cage are a group of ragged humans who were found hiding among the ruins of New York City, which is burning in the background. A party of demons is taking a joyride in a red convertible alongside the transport as Logan cracks a whip at his steeds with flaming eyes and smoking nostrils. I don’t know why he needs the whip if they are possessed, since they would be under his power or at least on his side. For someone with Wolverine’s enhanced senses, this new world must be a pretty stinky place. His prisoners look like they haven’t bathed in weeks, the destruction has raised more smog than L.A.’s worst day on record, and those demons certainly can’t smell too good, either. But I digress.

It gets pretty brutal, tender readers, I kid you not. If your sensibilities are already frayed from too much coffee, I understand if you need a minute before reading further. The very first act Madelyne Pryor and S’ym perform once they’ve stolen the power of the demon lord N’astirh (destroyed by the X-men and X-Factor) is to kill all of the mutants in a brutal blast of energy, pausing at the last moment to spare Wolverine (the most popular character among readers, of course). They plan to make him a pet and spend their leisure time corrupting his soul. Oh, and there’s the babies. Yeah, they need to sacrifice newborns to increase and solidify their power, except when one is needed to serve as Logan’s supper. Fortunately, we don’t have to watch that horrifying act, only seeing Madelyne and S’ym laughing at how dark Wolverine’s soul has become. The world’s mystics have gathered together in hiding and are seeking an arcane solution to the demonic infestation while the remaining super-heroes wait impatiently for their chance to act. While the magic-users try their best to keep the group hidden though socerous shields, the demonic forces somehow discover their location, led by a demon-tainted Hulk and Wolverine who burst into their hideout in the Federal Reserve.

Many of the heroes are affected by the demon infestation, even if they are not corrupted by its malevolent taint. The Human Torch cannot turn off his flame and the X-men’s (and other mutants) physical appearance were significantly altered before they were killed. Reed Richards and Doctor Doom have been demonized and are working together to build a device that will expand S’ym and Madelyne’s power to the multiverse before the Living Tribunal arrives to judge and destroy the Earth (long story, don’t ask). Doctor Strange has an eyepatch in this comic (while sporting a gorgeous mullet), but I’m not sure if he was also wearing one in regular continuity. Hulk is shown as gray, since that was his coloring when this issue was published, but the corruption of the demons makes him so savage that I would think he would’ve reverted to his green “Hulk Smash” persona in any case. When Hulk, Wolvie and their demon pals launch their assault, the ranks of good guys quickly become thinned as Wolverine viciously slices up Doctor Druid, Captain America and Spider-Man, Hulk murders Scarlet Witch, Shaman and She-Hulk, and S’ym vaporizes all the mystics except for Doctor Strange and Baron Mordo before overloading Thor’s hammer in an explosion that takes the thunder god’s life in a cataclysmic instant.

As more demons continue to spill out of the portal from Limbo and humankind dwindles to a small fraction of what it had been, all the resistance that remains is Strange, Mordo, Kitty Pryde and the Human Torch, who all teleport away to another hiding place, The Daily Bugle. The Doctor senses a source of great power hidden somewhere in Manhattan, but when he finds it in the form of a mannequin, he uses his power to reanimate it and finds the frozen form of Rachel Summers, wielder of the Phoenix Force. As she reunites with her ally, Shadowcat (Pryde), Rachel and Strange plot a last-ditch strategy to cleanse the Earth of the demon plague once and for all, by summoning the Phoenix itself! With so much at stake and their forces so depleted, it seems this may be their only hope (despite the great risk the Phoenix poses to all life on the globe), but not all of the survivors put their faith in this plan. Thus, Mordo betrays the party, giving S’ym and Pryor their location in exchange for his life and once again the forces of evil come down upon our heroes, threatening to extinguish the resistance and the last hope for all humankind. 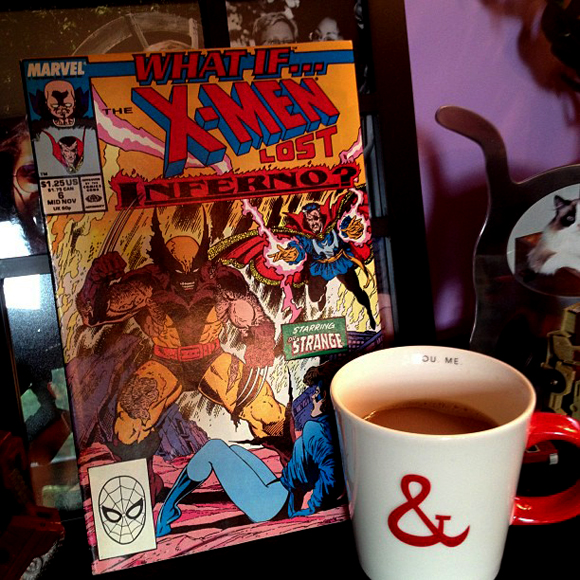 Johnny Storm sees how desperate the situation is, so he intensifies his flame to its “nova” level while Strange forms a protective shield around he and Rachel. She reaches out with her mind to the Phoenix, worlds away, and it responds to her summons! The Torch’s power spent, he dies under demon claws, and while Rachel continues calling to the Phoenix, Strange defends her with all his magical might, taking on all the demons and holding them back with every spell he can muster. Unbeknownst to him, however, Wolverine silently stalks him from the shadows, waiting for the perfect moment to unsheathe his adamantium claws and finish off the Master of the Mystic Arts once and for all. Just when he is about to pounce, Shadowcat races through several obstacles in her intangible state, solidifying only when she reaches her former friend to slam her body into his and prevent him from striking down the Sorcerer Supreme. While Kitty must deal with an enraged Logan, Mordo fells both S’ym and Strange with an eldritch bolt, and Madelyne strikes down Rachel, taking control of the just-arrived Phoenix – all as the Living Tribunal arrives to exact his irrevocable judgment upon the entire planet.

All seems lost at this most dire moment, but you’ll have to read the issue to learn the fate of Kitty, Wolverine, Strange and all of humanity, my friend! This was one of the very first comics that I bought outside of my normal Marvel mail subscriptions, and I’ve lost count of how many times I’ve read and re-read it over the years. In addition to this issue, Incredible Hulk #340 was the only place I got to meet Wolverine (besides seeing his image in promotions on advertisement pages), so I became a lifelong fan of this outfit, usually called his “red and brown” costume, which he donned throughout the 1980s and early 1990s. The artwork by Lim and Williams is flawless. While not one to employ many shadows in his art, Lim makes everything beautiful, even among the death and destruction. The detail of his renderings is also impressive, featuring beads of sweat, tattered clothing and filthy grime to add substantial texture to the figures of physical perfection. Not only do I love his work on this and Silver Surfer comics, but I prefer his pencils to those of George Perez and other artists on The Infinity Gauntlet, Infinity War and Infinity Crusade (despite the struggling quality of those later stories). This particular story is dark, violent and unrelenting, which is just how I like it, and as much as I’ve recommended any book in the past, true believer, I’m strongly endorsing this one today. Enjoy your Sunday, my friend, savor some good java and Fare Thee Well!

What If…? #6 is written by Danny Fingeroth (Spider-Man), penciled by Ron Lim (Silver Surfer), inked by Keith Williams (The Phantom) and colored by Tom Vincent (The Thanos Quest).