HONEY, WE SHRUNK THE MONSTER!
(or you’ll laugh your fedora off, unless you have a shrinking sense of humor) 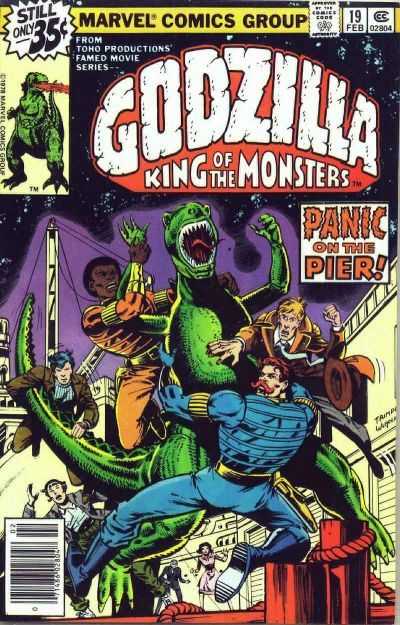 I like to think of myself as an experienced comic book reader, perhaps even an aficionado of this pleasant pastime. As such, I’ve read a fair share of diverse material: super-hero, espionage, thriller, horror, romance and other themes, including comedy comics. I have to admit that I’ve never found “funny” comics to be all that humorous, with the exception of Love & Capes by Thomas Zahler, and that includes both elbow-jabbing parodies and slap-stick joke-fests. For the most part, they are either decidedly un-clever and predictable or in poor taste. But then, there are the few unexpected books which are laugh-out-loud hilarious, which is even better when it’s totally unintentional. Now I am no mind reader, true believer, so for all I know the creators saw this project as a either a farce or as high art. Regardless, Godzilla King of the Monsters is a whole mess of fun (emphasis on the “mess”). Welcome to another Comics ‘n Coffee and thanks for sticking with me these past 20 weeks!

In 1954, a 50-meter tall amphibious reptile burst from Tokyo Bay to terrorize Japan and its neighbors for 60 years (yes, there is a new Godzilla movie from Legendary Pictures due out in 2014). Called “Gojira” (go-zhee-ra) in Japanese, Godzilla quickly became a worldwide cinematic phenomenon and literally the biggest movie star ever, soon losing any metaphor he used to represent for the dangers of atomic testing. Over the next 30 years, you began to see Godzilla’s image on everything from lunchboxes to Pachinko machines (Japanese slot-style gambling devices) to Saturday morning cartoons. The producers of the Godzilla films, Toho Productions, used his likeness to strategically build the kaiju brand (Japanese for “giant monster”) and gain international enthusiasm for Godzilla movie distribution. In 1976, Marvel Comics Group acquired the license to produce a comic book based on the radioactive beast where he would bring his gigantic adventures here to America. They spent the next two years figuring out how Godzilla would encroach into the Marvel Universe and how he might amuse their readers.

Keeping in mind that they acquired only the license for Godzilla’s name and likeness, not any of the other Toho properties, such as Rodan, Mothra and King Ghidorah, Marvel had to figure out what Godzilla would do once he arrived in the good ol’ U.S. of A. Who would he fight? Where would he travel? How do we get super-hero comic readers to care about this guy? Over the course of 24 issues, SHIELD menaced the gargantuan gray galoot (although in the comics they color him green) at every turn while Godzilla faced a number of fiendish creatures with the most bizarre appearances you’ve ever seen. These adventures occurred while SHIELD engaged the services of the Takiguchi family, who consulted on Godzilla based on their scientific studies of him back in Japan. In the previous issue (#18), Godzilla fought off the threats of the New York City sewer system after being reduced to 12 inches tall by Henry Pym’s (Ant-Man/Giant-Man) shrinking gas. Now, as young Rob Takiguchi (Godzilla’s most passionate advocate) finally finds the monster emerging from a sewer grate, the gas wears off a bit to increase Godzilla’s size to five feet, creating a face-to-face showdown with the teenage boy!

Godzilla’s favorite mode of verbal expression consists of “graw”, “mraww” and “hraww”, which make up his animalistic grunts and exclamations. Rob approaches the monster to try and calm him down, talking to him like you would a small child. When he reaches out to touch Godzilla’s head to show that he’s friendly, I almost want to see his fingers get nipped for such a ridiculous idea. However, Rob’s soothing does the trick and off go the boy and his monster, strolling down the New York streets in search of safety. It’s dusk in the city’s outskirts, so the streets are somewhat empty (good enough reasoning for deserted city streets, I suppose), so the first person they encounter is a drunk muttering to himself. Godzilla notices the poor man sitting on the curb and makes a muttering of his own, drawing the drunk’s attention. “Huh–?!!!” he exclaims as he rises to his feet, “Better BELIEVE I don’t need none of THAT!!”, and he slams his bottle down on the ground, running away to find some “coppers” to deal with the monster. I really don’t know WHY the police responded as quickly as they did, considering that a man reeking of cheap booze stumbles toward them and warns them of a green monster roaming the street, but they come running and find Godzilla and Rob ducking down an alley. It appears for a moment that they are trapped, but Godzilla clears an escape path by blasting a hole through a fence with his radioactive breath.

Later, the boy has a stroke of brilliance and decides to get Godzilla a disguise. Somewhere they find a raincoat and an old fedora, and now Rob and “Godzilla P.I.” attract the attention of a pair of NYC muggers. Once confronted, Godzilla sheds his disguise and roars at the thugs, petrifying them with fright. Frozen in place isn’t good enough for ol’ ‘Zilla, however, as he blasts them with his breath weapon, giving them some nice burns to tell stories about later. The two friends move on in their journey, arriving sometime later at the docks to find a small party waiting, mainly the Takiguchi family and two members of SHIELD, Dum Dum Dugan and Gabe Jones. They have been out looking for a pint-size Godzilla all night and their are just about to give up when the monster arrives right in front of them with Rob in tow. “Who is that other guy [with Rob]”, Dum Dum asks. For some reason, Godzilla pulls off his disguise once more, as if to say “recognize me now, jerks?”. And just at that moment, he grows a little more due to the wearing off the shrinking gas, which gives him a couple extra feet of height.

Despite Rob’s protestations, Dum Dum and Gabe surround Godzilla and Dugan pulls out his weapon. Apparently, Godzilla saved his life on a couple of occasions before today, so Gabe grabs Dugan’s arm just as Dum Dum fires his weapon to keep him from shooting the monster. Only after the weapon is discharged does Gabe learn that it wasn’t a bullet aimed at Godzilla, but a tranquilizer dart. From here, the fight proceeds in earnest. Godzilla grabs the two men by the scruff of their SHIELD uniforms and hoists them off their feet like an old Three Stooges shtick. He tosses them into the trash, followed by Dum Dum equipping himself with a harpoon and trash can lid to force an impromptu jousting match between him and Godzilla. The Big G yanks the harpoon out of Dugan’s hand and deflects his attack with ease. They trade punches for a moment before Gabe jumps on Godzilla’s spiky back, which ends in Godzilla tossing him off like a bucking bronco. Somehow the fight transforms into a pro wrestling affair next, because Dum Dum lands a drop-kick on the monster’s back and then Godzilla hoists Gabe over his head to throw him into the water, all the while Rob tries to settle everyone down. 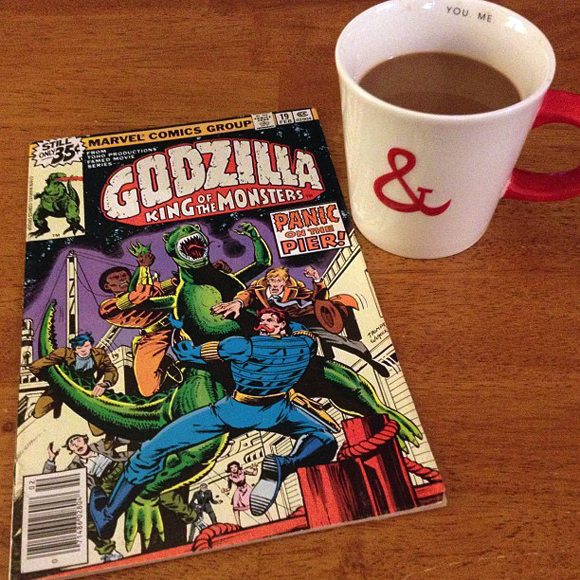 “Please, Godzilla, don’t hurt them. They’re not really mean…”, bellows Rob, “They’re jut crazy Americans who don’t understand that a monster doesn’t have to be a monster!” Even Godzilla knows the kid is nuts, so after dumping Gabe into the drink, he lays Dum Dum out with a vicious right cross (which makes the noise “SPAM”) and decides that its time to get out of there. As the tearful Rob watches his friend wander back toward the city, Dum Dum and Gabe review their pugilistic prowess, joking that “[Godzilla’s] the undisputed champion of the docks.” The whole story is ridiculous and fun, and it makes me smile every time I turn the page. There are scenes throughout the book which I never thought I’d see in a million years: Dum Dum landing a left hook on Godzilla’s jaw, Godzilla fleeing the police through a fence hole, but the most outrageous of them all is the image of Godzilla wearing his Dick Tracy outfit.

As with most Marvel books, the fact that this story takes place in the real world is evident. That is indicated as we see the U.N. building in one scene, the George Washington Bridge in another, and famous Central Park in yet another. The artist, Herb Trimpe illustrates these locations flawlessly, and he also includes a wide range of subtle detail sto add further realism to an otherwise unrealistic tale. Posters for Barnum & Bailey’s Circus can be seen, shadows are used to good effect and Godzilla’s scaly flesh is rendered with consistency. Overall, he does a serviceable job in this issue, but he has his work cut out for him trying to deliver a human-sized Godzilla out for a night on the town. Over the years, Marvel has put out a handful of books about characters who neither speak nor have word balloons, such as Man-Thing, but they all had their struggles in gaining sustainable readership. Despite featuring one of the coolest characters to ever flatten cities in movies, comics or other media, Marvel’s Godzilla comic didn’t last very long and he soon would leave New York City behind and swim back to Japan. But that story, my friend, is for another day and another pot of coffee. Fare Thee Well!

Godzilla King of the Monsters #19 is written by Doug Moench (Batman), penciled by Herb Trimpe (The Incredible Hulk), inked by Dan Green (Spider-Man) and colored by Ben Sean (Dozens of Marvel Titles).