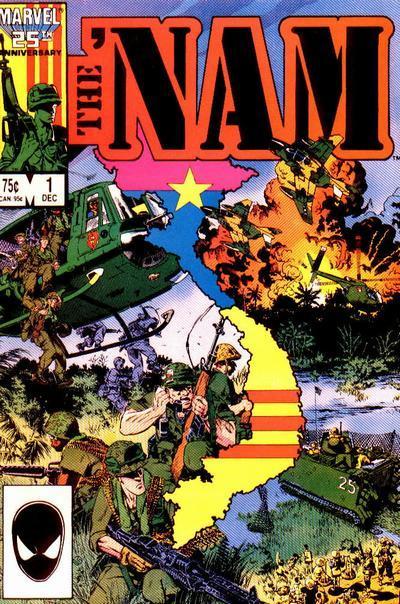 “Early in 1966, a young soldier leaves home for his first taste of independence, and WAR.” With these words, dear reader, I was hooked, enthralled and entranced. And so began one of the most wonderful comics reading experiences of my jaded fan’s life. I’m not an established fan of war comics, but that’s perhaps because in 30-plus years as a comic book reader, I’ve never read more than a handful of these stories. I certainly have never read a story about the U.S. War in Vietnam, and I’ve also never before read The ‘Nam. This book is actually one of two premier issues of 1980s comic titles which I have read this past week, but the other one isn’t even worthy of carrying the duffel bag of The ‘Nam #1. I needed an extra cup o’ joe after this one, dear reader, just to bask in the amazing artistry with which these creators conveyed a naive young man’s first patrol into the Vietnamese bush outside of Saigon.

I’m no expert – or even somewhat knowledgeable – concerning military warfare, the U.S. Army or the ‘64-’75 conflict in Vietnam. That said, I must make every effort to do this story justice, and that means I’ll be embarrassing Comic Impact with my awkward use of the lingo. The ‘Nam comic book (1986-1993) follows the wartime experience of a PFC (Private First Class) named Edward Marks who participates in the real-life events of the 23rd Infantry. “You’ll be recruited into a fighting unit! You’ll battle the Vietcong! You’ll experience the excitement, the danger, the laughs, the fear and the insanity of this undeclared war, thanks to Vietnam Vet Doug Murray and Michael Golden!” I like to believe that I know my comics, true believer, and such claims as these are hard to substantiate without solid talent behind the effort. If you ever get to read The ‘Nam, I’m certain that you’ll agree that this creative team delivers on every single one of them.

Marks goes through his first month (give or take) in active duty and we get to witness all of his important and not-so-important moments between the U.S. and the RVN (The Republic of Vietnam, more specifically SOUTH Vietnam). The Private isn’t fond of flying, so his parents remind him to take his Dramamine before flying off to Fort Lewis in Seattle, WA, which is his last time on home soil before making the trip to Vietnam. Nothing will ever be the same for young Edward after oh six thirty (0630 military time) on 8 Jan. 1966. The sergeant gets the recruits through all of their basics: immunizations, KP duty and training activities in the early hours of the morning. Later, it’s a pleasant enough flight to the RVN, despite Ed’s fear of flying, but Victor Charlie (“V.C.”, short for Vietcong, the communist guerrilla movement fighting the South Vietnamese and U.S. forces) fires pyrotechnic rounds at the plane, making it a very rough landing at Saigon Airport.

Our PFC is literally pulled and prodded through his preparations, learning about the danger of malaria in the Vietnamese jungle and seeing his fair share of burned-out Army vehicles on his journey to field headquarters. Arrival at the 23rd Mechanized Infantry Division (of the 4th Battalion) doesn’t go without incident, and Marks gets stuck an unpopular riffraff unit because he didn’t grease the palm of the 1st Sergeant (i.e. offer him a bribe) to give Ed a cushy assignment. He makes fast friends with some of the unit’s members, who help him get settled before running off to a search-and-destroy mission first thing the next morning. He’s referred to time and again as “Greenie” (because he’s new), but the guys try their best to bring him up to speed. This includes showing him how to make river water drinkable using iodine tabs in his canteen, how to spot a booby trap in the form of a plunger-side-up mortar shell and how the unit spreads out during patrols so the entire group isn’t vulnerable to a single line of fire.

Ed’s education really begins, however, when they enter a small village where the locals start “bugging out”. This precedes an unexpected and rapid firefight for which Pvt. Marks is woefully unprepared. The V.C. enemies blast away as the unit dives for cover, and one of his fellows pulls “Greenie” out of the line of fire because he’s too petrified with fear to move on his own. A little bit of prompting follows (“C’mon, kid, don’t take a nap. Do something with that ‘16. Shoot it or eat it.”), and Marks starts firing alongside his allies until they get the better of the V.C. forces, all two of them. The ease of their victory, however, does nothing to prepare Ed for the horror of seeing his enemies’ bloodied bodies in the brush. His pals assure him that it’s not quite as hard after the first one, and that he’s going to be just fine.

The mission continues across the countryside and the unit’s armored support comes rolling up behind them. It’s the Australian forces riding inside U.S. vehicles called APCs (Armored Personnel Carriers), and one of them comes across a booby trap which takes out the vehicle’s treads (fortunately not their passengers). Ed and his unit proceed to lead the APCs and seek out traps until they finally reach their destination. No sooner do they relax, however, than an enemy soldier pops up from a “trapdoor” and fires on two of Ed’s cohorts. The men launch a brutal offensive at the tunnel-borne combatant until the threat is ended, and then proceed to seek out more trapdoor-tunnel entrances in which to drop grenades, clearing them of their contents. That’s when the Sergeant calls in reinforcements, and the choppers arrive in a flash to take the men back to base.

You’d think after his first couple of firefights and wandering the bush of a foreign country all day, Ed would be glad at the prospect of heading home with a successfully completed mission. Not so, however, as he takes one look at the helicopters and his heart just sinks. No Dramamine in his gear means that it’s going to be a long flight back, and we can only hope that Marks is going to get over his fear of heights and flying soon. Back at base, there is beer, a card game or two, and a variety of general merriment while the soldiers unwind from the day’s combat. Despite his general malaise, he joins his unit in attending the HQ’s movie feature, “Major Dundee”, which Marks saw a few weeks prior in the States. However, he quickly learns that movies and other comforts of home, and everything else he took for granted back in “the world”, is vastly different from how things are here in “the ‘Nam”. 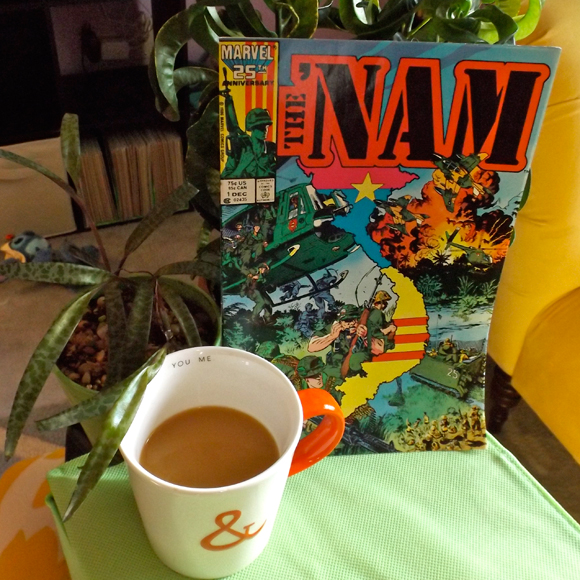 There’s no such thing as a flawless comic book and I can certainly find some quibbles in this one. I notice that any instances of engaging the V.C. don’t give us a single glimpse of the people Marks and his unit are fighting. In essence, they are fighting a “faceless enemy”, which allows us to see war without considering the lives of those we’re fighting. This is a factor that every soldier in combat must face if they are going to continue fighting their enemy. Also, there is no mention of the soldiers who were lost in the firefight, where I’d think that the loss of these fellow members would cause at least a small degree of grief, no matter how used to it these men have become. I have to wonder if it was the creators’ intention to hide these factors or if they fell victim to the policies of the Comics Code Authority. I was grateful at the end of the issue, however, for there is a glossary which helps the reader make head or tails out of terms used throughout the story, such as “repo depot”, “mos koshee” and “11 bush”.

Overall, the book is simply amazing. It’s a story with which I, as the reader, quickly become engaged and invested. The ‘Nam has great, interesting characters and the artwork is some of the best I’ve ever seen. As a fan of The Micronauts, I’m familiar with Michael Golden’s work, but he really put his all into this comic in both his pencils and the colors. The sheer artistry is amazing and his rendering of scenery and lighting is only surpassed by his characters’ expressiveness and the gorgeous military vehicles. On top of that, the lettering by Phil Felix breaks with Marvel norms and actually goes easy on the exclamation marks, which normally complete every sentence in a traditional super-hero book! The ‘Nam has earned my highest possible recommendation across all artistic categories, and if it doesn’t make you feel some serious emotions, then you better check to see if you still have a pulse. So grab a cup of “mud”, “battery acid” or any other Army slang for coffee, read The ‘Nam and Fare Thee Well!