THE WALKING DEPRESSED
(or “The future must be met, no matter how crabby and bummed-out it be.”) 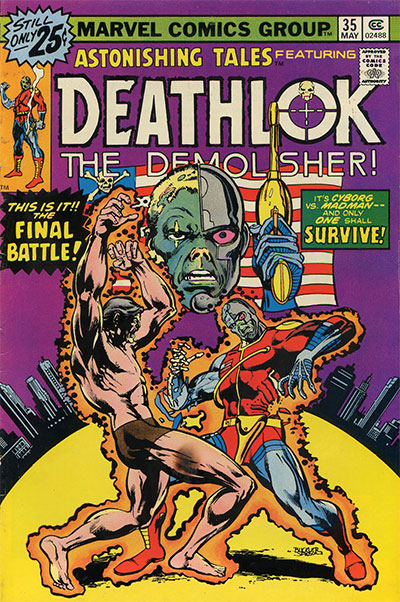 With another Independence Day upon us this past week, I thought it might be fitting to do a Comics ‘n Coffee featuring the most patriotic of heroes. What better way to celebrate the freedoms we hold dear than to spotlight the adventures of a former soldier who was altered to become one of Marvel’s most dynamic super-powered champions, sporting an American flag as part of his very uniform! A man out of time, seeking his place in a world he doesn’t recognize, I’m talking about the lionhearted paragon of America’s fighting men and women, the cyborg Deathlok! This half-man, half-machine was created by Rich Buckler and Doug Moench to save all us citizens from the evil corporations and military regimes which turned America into an unfamiliar land of oppression and tyranny – all in the far-flung future of 1990!

It’s your typical super-hero origin story: Luther Manning was a highly skilled soldier until he died in battle. Later, he woke up in a post-apocalyptic future to discover that he’s half-cyborg, but the human half of him wasn’t in that great of shape. In fact, it’s rather zombified, all thanks to a psychotic military commander named Simon Ryker. Going by the name Deathlok, he fights Ryker and other forces of evil while benefiting from enhanced strength, cybernetic weapons and the analytical prowess of a built-in, symbiotic computer, which he affectionately calls “Puter”. To be perfectly honest, dear reader, I’ve never read a Deathlok story before. Calling the action on this one is going to be as alien as reviewing a book from the Distinguished Competition. Therefore, all I can promise is to give it the old college try.

The story starts in the middle of a battle on the mental plane between Deathlok and his nemesis, Major Simon Ryker, who is basically a ghostly apparition of a muscular, naked, white-haired giant. I call him a “giant” because, even though it appears that he’s supposed to be a normal-sized man throughout the story, his skeleton is elongated and his hands and feet are twice the size of any normal person. While the story takes place in 1990, the book was written in 1976. This is important because Ryker takes Deathlok on a floating tour through his memories back into the past, 1985. This was a full nine years into the reader’s future, mind you, and it shows us the Island of Manhattan where barges transport dead bodies to be recycled within “body banks”, which is where Ryker originally found Luther Manning’s body. Ryker then shows Deathlok explosions tearing Manhattan apart, explosions from an attack by “The Enemy”, and how their system crumbled because of “Them”. It’s all order and rule of law for this guy, and Deathlok learns that disorder and chaos scared Ryker into building this new world of absolute control.

Our hero leaps at Ryker and the two engage in a battle of strength and will, building up some some sort of energy around them as they wrestle in a stalemate. Deathlok spends a lot of time lunging, writhing, retching and cringing in this issue, all while using the vocabulary of a sixth grader. He’s a very angry person, always accusing and distrusting everyone and boasting how little he thinks of them and how unhappy he is. Words like “facin’ “ and “tryin’ “, “awright” and “talkin’ “, “rattlin’ “ and “get ridda me” are the jive-talking highlights you get from his dialogue, and it all comes across as rather disagreeable and annoying after a while. People externally observing the mental brawl begin a sequence meant to bring Ryker and Deathlok out of the mental plane and back to the real world, but the process drives Ryker totally nuts, leaving a ranting, naked, white-haired Adonis flailing about the lab. Right before Deathlok is about to finish off the madman for good, a group of armed soldiers comes storming into the lab under the command of someone Deathlok just keeps referring to as “Lady”. 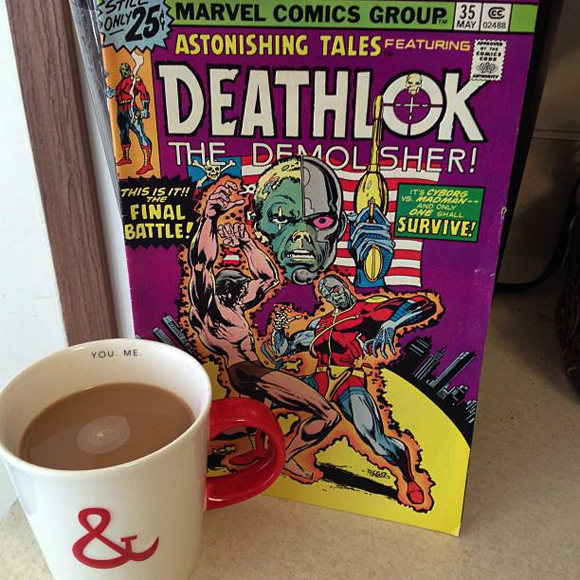 “Lady” starts giving him the lowdown on whether he should finish the job on Ryker and how his computer-side programming has been manipulated, or some such. She convinces him not to leave, but join them on a mission to Fort Dix to face the even bigger threat (conveniently) of Ryker’s brother, Hellinger. The further I read into this book, the more I realize I can’t understand what’s going on or being discussed unless I read the previous issues. In my opinion, this is an unfortunate departure from other Marvel books during the Bronze Age, which often make a strong effort to bring new readers up to speed within the first few pages. They fly off in a helicopter (what, no hoverjets in futuristic 1990?) to what’s called the “Administration Cluster” where they proceed to sneak around out of sight. A pair of soldiers spots Deathlok skulking in the shadows and shout “It’s Ryker’s cyborg! He’s gone berserk!”, which makes me wonder just how the word “berserk” is defined in the future.

Deathlok and “Lady” make their way down a hallway which has pressure-sensitive plates which would’ve triggered lethal traps if anyone besides these two people walked upon them. They enter a lab where hundreds of tape cassettes are stored containing the minds of people who no longer have bodies. Even the U.S. President is stored here, which Deathlok’s “Puter” easily confirms by “tactile analysis” (touching it). The plan is quickly revealed that they want to use this technology to transfer Deathlok’s mind into a clone of himself, that is, Luther Manning. As they set up the machines, “Lady” and another agent discuss whether losing such a fine operative as Deathlok is wise, where she responds “That IS what we’re fighting for, isn’t it, Tom? The right for us ALL … to be HUMAN AGAIN?” I’m not sure how to interpret this question, be it rhetorical or literal, since Lady and Tom both seem pretty human to me.

The twist at the end of the comic is a pretty decent one, so I won’t spoil that, but overall I’d count this as a failed effort. The story, writing and artwork all come across as confusing, ranging from Ryker’s grotesquely enlarged body parts to the overly convoluted plot to the total ambiguity of the main characters’ identities and motivations. Nobody was likable in any sense, Deathlok always had the same sour puss on his cyborg-zombie face, and I never got a notion for what he and his allies were really trying to achieve. I found the cover slightly amusing, considering that naked Ryker was given a pair of briefs to appease the censors at the last moment. Even though the cover promises a “final battle” where “only one shall survive”, neither was there much of a battle nor did anyone perish. However, the cover does feature a cute American flag in the background with a skull and crossbones where the stars should be. Now, if that’s not a patriotic way of celebrating our nation’s independence, then my uncle ain’t Paul Revere! Fare Thee Well!

*and wife to The Boisterous One himself.