I must admit I never read Quantum & Woody back in the 90’s. My 90’s Valiant consisted mainly of that awesome Image Valiant cross over Death Mate,Turok, XO, and some Solar issues but with the way Valiant is crafting their universe I thought I would give this re crafting of a fan favorite a chance and boy am I glad I did! 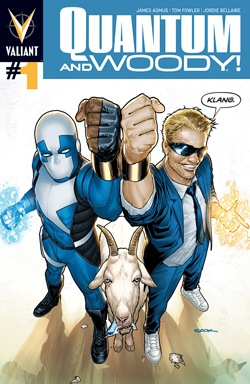 I wasn’t sure what to expect when I first open the pages of this book. I half expected the playfulness of Marvels Deadpool character with a partner and possibly a crazy goat (more on that at the end) but what I got was something entirely different. What I ended up with was a heartfelt book about two brothers from other mothers that couldn’t be more different and because of that are bound to each other.

Don’t get me wrong….James Asmus gives us plenty of playfulness in this book. The writing is quick witted and demands you be as well, with little musical nods right out the gate this book is oddly much more grounded than a Deadpool title which gives me a lot of hope for this title.You didn’t come here to read about what it isn’t like though so let me tell you about what it is like. This book is a book full of those moments you used to have with your best friend. Those unafraid moments that allowed the two of you to be completely dirty and stupid and nonjudgmental with one another. That is the story
Asmus is telling with Eric “Quantum” Henderson and “Woody” Woodrow Wilson.

This is a first issue so expect the typical things to happen story wise. You get to meet both our heroes pre powers and then see them gain their abilities as well as set up future villains for the firstarc.Those are just road maps though that all comics take it is really how you get there that make it worth the trip and what a trip Asmus and artist Tom Fowler have started us on. Both Quantum and Woody are completely real and relatable people full of character and personality that leap off the page…not unlike another Valiant title Archer & Armstrong.

Now I would be slightly remiss if I didn’t mention the fan favorite goat that is notably absent everywhere but on the cover. I am not someone that likes to brag or gloat but this is it my one time I will. I am happy to say that I did the voice of the goat Vincent Van Goat and was happily directed byValiant CEO and CCO Dinesh Shamdasani. I know from talking to him that Vincent will show up later so fear not Old School Q & W fans his hooves are primed for a comeback as well!

Quantum and Woody walks that line that is done so well by all other Valiant titles. It marries new with the old and gives us plenty of feeling and character. This is done brilliantly by writer Asmus and artist Fowler and will guarantee to leave you with a smile on your face and anticipation for issue 2!