LIFE SUCKS WHEN YOU’RE A SUCUBUS 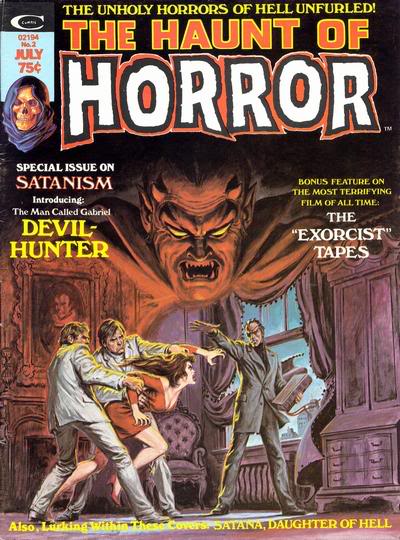 I have an irrational fear of werewolves (as opposed to my completely rational fear of sharks). Some of my clearest childhood memories are of reading black-and-white comics on our upstairs couch, horror comics which were loaned to me by one of my cousins. These were comics my parents never would’ve allowed me to read at such a young age, for they featured witches’ curses, undead fiends and, most terrifying of all, our furry friend the lukanthrÿpos. I never learned the name of the artist (such things were irrelevant to me at the time), but it very well could’ve been Gene Colan, Berni Wrightson, Gray Morrow or someone else who scared the bejeezus out of a juvenile Smash. I would love to know who is responsible for a lifetime of nightmares, so I could thank him in earnest. I read and re-read these comics until my cousin wanted them back, but I asked to borrow them again many subsequent times. Horror comics have been an extremely noteworthy part of comics history, but as an adult I have been unable to find anything which can scare me. I am extremely fortunate to have a local comic shop, Creative Comics, which often has Bronze Age items galore waiting to be discovered by an unsuspecting subscriber. It was only last month that they presented me with a few copies of The Haunt of Horror, a book I had never before read nor knew what to expect. I decided to take a chance on a genre I thought lost to the ages. All of a sudden, I was seven years old again on my parents’ couch, and now I may never sleep again.The Haunt of Horror #2 came out in July 1974, only a scant few months before yours truly came smashing into the world. This black-and-white magazine is comprised of different sections, which I’ll try to describe and do justice, though I will already suggest you read this for yourself. First, let’s check out the most tame portion of this book, a piece of sequential art introducing us to Gabriel, Devil Hunter. A vandalized church with its crucifixes turned upside-down lets you know that something is definitely awry and we quickly learn that Father Artemis is the victim of demon possession! Father Lazar seeks out a former priest, now demon hunter, a many with a white streak of hair receding down his head and an eyepatch hiding his absent orb known only as Gabriel. His assistant, Desadia, wears a black, slinky catsuit at her desk, and she is very good at getting coffee and seems to have some powers of divination.

Upon recruiting Gabriel, the demon hunter employs his powers of exorcism to try an expel the evil being from its victim. We get his origin story in the process, learning that the same demon which now possesses Father Artemis once also victimized Gabriel, but he self-exorcised it from his body. Gabriel not only drives the demon from the priest’s body, but succeeds in destroying it for good. It set the stage for an ongoing series of stories in future issues featuring this character as he battles demons with a surly grimace and take-no-prisoners attitude.Next, Chris Claremont provides an in-depth background of the true events, subsequent book and 1973 movie of The Exorcist by William Friedkin. In addition to a substantial article about the topic, he presents another feature intriguingly called The Exorcist Tapes. This was a recording-turned-transcript of a conversation held in the home of Gerry Conway where seven members of the Marvel Bullpen – after seeing the movie together three weeks ago – sat down to discuss it in great detail. For any of you who think this might be the most boring segment ever published, let me set the stage for you. It featured “Cheerful” Chris Claremont, “Gallopin“ Gerry Conway, “Cute” Carla Joseph, “Dauntless” Don & Sandy McGregor, “Wandering” Marv & “Meticulous” Michele Wolfman, “Lively” Len Wein and none other than Steve “Baby” Gerber! It’s basically a round-the-world discussion of the movie, from it’s plot, special effects and dialogue to its characters, morality and value as a film. We get comparisons to Rosemary’s Baby and Hell House, which is to be expected, but also Love Story, Deep Throat, Lawrence of Arabia, The Sound of Music and the election of President Richard Nixon. Their conversation examines the reasons for the inclusion and exclusion of story elements from the book, whether the lack of a “point” makes it base pornography, why it’s generated so much excitement among moviegoers, and what level of disgust and revulsion each of them had from the movie’s more graphic moments. It’s a fascinating discussion between some very smart, thoughtful and well-spoken creators, but this magazine only contains HALF of the transcript! I am quite eager, true believer, to finish reading it in the next issue (which I am so glad to have picked up at my comic shop).

A short story in the middle of all this craziness goes by the name of “Gran’ma Died Last Year”. The story warrants only casual mention compared to the other features, but is enjoyable nonetheless. A little boy loves his grandmother dearly, someone who is pretty much his best friend in the world. As grandmothers do, however, she dies and is buried. The boy is griefstricken and his father becomes abusive to both him and his mother. Distraught, the boy digs up his grandmother’s body one night and props her up on a chair in his bedroom, talking with her as though she was alive (she doesn’t say anything the reader can notice). While this conversation occurs, his dad comes home highly intoxicated and ends up killing his mother with a blunt object in his rage. The boy confronts his father, claiming that his grandmother was right to say that he’s a bad man. Dad can’t believe that Gran’ma is up in his son’s room, so he has to go see it for himself. That’s when the boy enters from the hall with a meat cleaver, squaring up Dad in his sights. I’m sure you can fill in the rest.

Lastly, we have a most controversial story, or more accurately PAIR of stories, starring the Daughter of Satan, Satana. In the letters page, future Executive Editor at Marvel Comics Ralph Macchio (described as a “letter column regular”) throws some accolades toward the writing and artwork of the Satana stories featured in Vampire Tales. Roy and Marv succinctly tell us about a shakeup in the creative team behind the Satana stories, thus preventing the first component of a several-part story from being prepared on time for publication. The result is that we get TWO Satana stories back-to-back with the first in prose format by Gerry Conway (with several Pablo Marcos illustrations) and the second in comic-book style by Conway and Enrique Badia Romero, who replaces fan favorite Esteban Maroto. As the daughter of the source of all evil, Satana was raised in hell and finds herself “shivering” at the thought of someone’s soul going to “The Other One”, i.e. not her dad. I find her an absolutely fascinating character, someone who finds all things good and righteous in our world to be utterly alien. She is what is called a “succubus”, defined as a female demon who seduces men to gain control over them or drain their life force. Honestly, the way she is drawn by both Marcos and Romero are reason enough to read her stories, for we see perhaps the most sensual and alluring woman ever to grace the printed page. Much of the two tales we enjoy surrounds her exile from hell and her quest to warn her father of an unfolding incursion by supernatural deities known as “The Four”. Satana seduces a couple men during her manipulations, stealing their souls in the process. Despite the men being presented as unscrupulous or downright wicked, we never see Satana presented as any sort of heroic champion. She’s clearly out for her own benefit and will exploit any person or opportunity to achieve her goals. 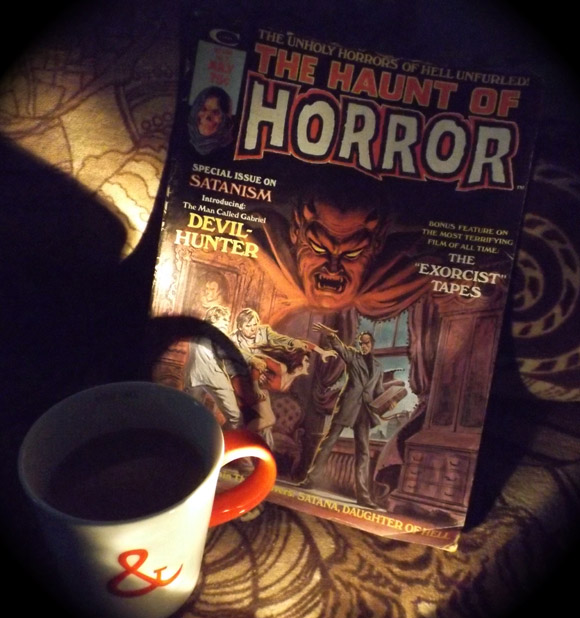 This is no different when she enters the “Bloody Path to Hell” and recruits her childhood playmate, an incubus named Zannarth. Since she can no longer travel to hell through normal means, she seeks a hidden path which is fraught with danger and convinces him (using her female powers of persuasion) to watch her back. While they fight off demonic agents of The Four during their journey, it is the discussion between the two that most interests me. She stole his soul during their youth as a prank, but he has been shamed by her trickery ever since. She calls him “my friend”, but I suspect that his injured pride implies more than just friendship is within his heart. It inspires my own ponderings where I wonder how creatures born of hell and raised in evil can possess feelings of love and friendship. When they fight off more demons, Zannarth uses his incubus powers to drain a female demon and steal her soul. I find myself puzzled by the idea of demons having souls. Like I wrote before, this is both controversial and fascinating as it opens up new possibilities of thought on the concepts of good and evil, right and wrong.I’m a big fan of black-and-white comics and this is one of the most beautiful ones I’ve ever seen. The best comics I’ve read are ones which I want to re-read over and over, and rouse my imagination beyond the day-to-day duldrums. I have no illusions that the topics covered in this magazine were nothing more than an attempt to capitalize on the national craze on exorcism and satanism, but it was pulled off with exceptional skill. There’s a lot here to scare the pants off even the most jaded comics reader and I guarantee that you’ll find more story packed inside these pages than you’ll find within a half-dozen modern trade paperbacks. You could subscribe to Haunt of Horror for a whole year (six issues) for $5.00 back then, which would’ve been a bargain considering the high-quality, chock-full content. As long as the name “Marvel Comics” wasn’t on the cover (even though the first item on the inside cover reads “Stan Lee presents”), it deftly avoided the restrictions of the Comics Code Authority, giving these talented bullpenners the opportunity to tell stories without compromise. Inside these issues, you find references galore to “rooms dripping with blood”, “demons from worlds beyond” and “terrifying tales of fear and dread”. After reading this magazine, I honestly might be afraid to turn off the lights tonight. That is, unless Satana is there to soothe my frazzled nerves. Fare Thee Well!The Haunt of Horror #2 is a combined effort of many member of the Merry Marvel Bullpen, published by Cadence Comics Publications, edited by “Rascally” Roy Thomas and “Marvelous” Marv Wolfman, and featured the creative efforts of “Devil-May-Care” Doeg Moench, “Irreverent” Billy Graham, Gene “The Dean” Colan, “Merry” Gerry Conway, “Earnest” Earl Norem, Pablo Marcos (Tales of the Zombie) and Enrique Badia Romero (Modesty Blaise).