(or Unless Your Name is “Wolf”, Don’t Mess With Giant Hitler) 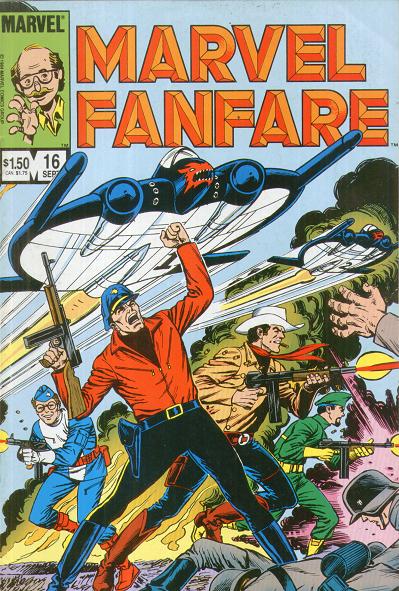 Among the eclectic super-hero teams throughout the Marvel Universe, you have your Starjammers, Sons of the Tiger and Great Lakes Avengers, along with the obscure Champions of Xandar, Band of the Bland, Rocketeers and even the Agents of S.U.R.F. One team of adventurers, however, helped to shape the definition of the word “heroes” before the world ever heard of Captain America, The Human Torch or Irving Forbush.Long before Hawkeye was busting the chops of every Avenger within earshot, or two powerful mutants started building teams to battle for the fate of their evolutionarily altered brethren, there was the Sky-Wolves! The saga of the Sky-Wolves is presented in Marvel Fanfare #16 and takes us back to the nervous days before America joined the war in Europe, but carefully watched the Nazi conquest with growing unease.

Marvel Fanfare is a title published by Marvel Comics Group from 1982 to 1991, distributed on a bi-monthly basis and amazing readers for 60 issues during its run. This comic book showcased the stories of Marvel’s most popular characters by some of the Bullpen’s best talent. For the privilege of reading these geniuses’ work printed on magazine-style slick paper, you paid twice the price of normal comics (an astonishing $1.25 in 1982). After a boarding party of Nazis is fooled by a disguised part-fishing vessel/part-super submarine, the Lobo II, we spy a secret meeting inside the sub conducted by industrialist Matt Slade, Jr. The meeting is to brief a trio of strangers, each of whom is as different from the others in personality and colorful costume can be. These men – Sidney “The Gaff” Levine, “Little John” Johns and their leader, Skyler “Sky-Wolf” Wolf – learn about an American pilot in an experimental aircraft who was lost over Nazi-controlled territory. Since people with the kind of access held by Mr. Slade know that the U.S. will join the war in a matter of months, they need these talented men to rescue or terminate the pilot before he reveals the secrets of this advanced technology to the Nazis. The only catch? the pilot is Slade’s son, Matt Slade III!

In the best Marvel tradition, these champions bicker the entire way through their adventure, constantly challenging each other’s opinions, talents, faults and personal character. They fly toward danger in some incredible aircraft which convert from vertical take-off and hovering modes via propellers to full-on jet-propelled planes, and thus are born the Sky-Wolves! Throughout their adventure, they sock it to old Hitler… a Hitler 40 stories high! The Flying Fuhrer circles the Boldavia countryside, raining fiery terror down from its gargantuan saluting hand, and only the Sky-Wolves can stop him! Besides taking down a King Kong-sized Adolph, the Sky-Wolves must penetrate the Nazi defenses of Murder Mountain, evade the Sky-Mines, defeat the Steel Kommando and thwart the plans of General Skul and the Third Reich. Success can only be achieved through the combined efforts of The Gaff, master of Hollywood special effects, Little John, expert escape artist, and Sky-Wolf, the best test pilot ever produced by the ol’ U.S. of A! While the heroes of yesteryear thrill us with humankind’s feats of courage, we are also treated in the second half of this issue to a fable starring one of the first super-powered members of the Marvel stable. 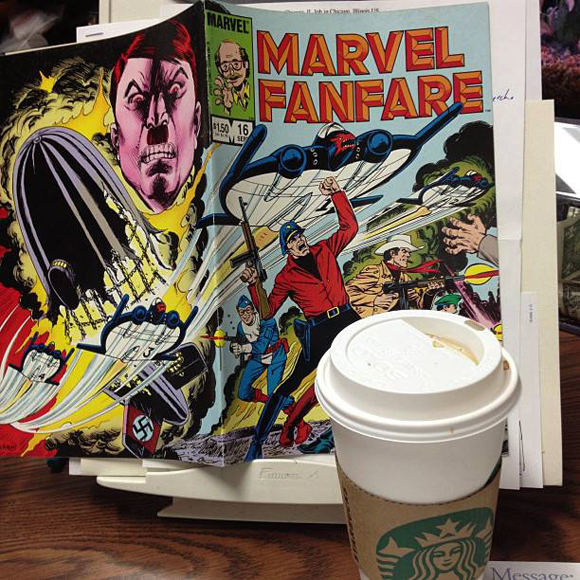 Unless you’ve been hiding under a rock the past 20 years, you know of Hellboy. The creator of this incredibly popular character, Mike Mignola, has spent most of his career building what fans call the “Mignolaverse”, but he started off as an inker over at Mighty Marvel. His very first penciling assignment was to illustrate an unusual story featuring the Scion of Atlantis, Namor, also known as The Sub-Mariner. Marvel’s most prolific utility man (and regular Incredible Hulk scribe at this time), Bill Mantlo, scripted a fascinating story that fits Mignola’s fledgling art style in 1982 with hints of his future style clearly displayed throughout. Namor comes upon a ship in distress atop a churning, stormy ocean, sailors abandoning ship and doing their best to bring a beautiful white stallion with them to the safety of the lifeboats. Namor approaches the displaced sailors with concern, but is mistaken for a sea demon and attacked with guns and grenades. As Namor regains his senses, the sea takes the men’s lifeboat from under them and drags them down to a watery grave. The horse, on the other hand, swims for its life. Namor is impressed with not only its beauty, but its nobility. Thus, he decides that the steed is more worthy to survive “than the scum who enslaved it”. Sadly, the attack left him weaker than he first surmised, so all his normally godlike might cannot save the stallion. His only hope is a desperate plea for mercy from Father Neptune, to whom Namor prays with an offer of his own life for that of the beast.

Each of these stories comes complete with its own pin-up style portrayal of the featured characters, which help to fill out the 36 pages of ad-free content. By featuring the most popular creators, characters and the aforementioned other elements, Marvel Fanfare was a title specifically designed to appeal to the fans. Not only was the paper stock of higher quality (and ad-free, don’t forget), but the colors and details were much more vibrant than your average comic book. Marvel paid rate-and-a half to incentivize the industry’s key talent to putting out a superior product. All of these factors combined to make it an in-demand book which justified the higher price to readers for nearly 10 years. And every single issue was edited by “Affable” Al Migrom. Thanks for reading, true believer! Next week is my 25th Comics ‘n Coffee column, so I hope you will join me for what I hope will be a very enjoyable milestone. Get yourself some of the best java beans you can find – and until next time – Fare Thee Well!

Marvel Fanfare #16 is written by “The Wandering Wolfman” Marv Wolfman and “The Boisterous One” Bill Mantlo, illustrated by “Daring” Dave Cockrum, “Joltin’”Joe Sinnott and Mike Mignola, colored by “Handy” Andy Yanchus and Bill Sean, and lettered by Joe Rosen and Rick Parker.