We are Super Heroes yes indeed Just girl power is all we need We know how to beat our foe Strength and courage and a cup of joe! 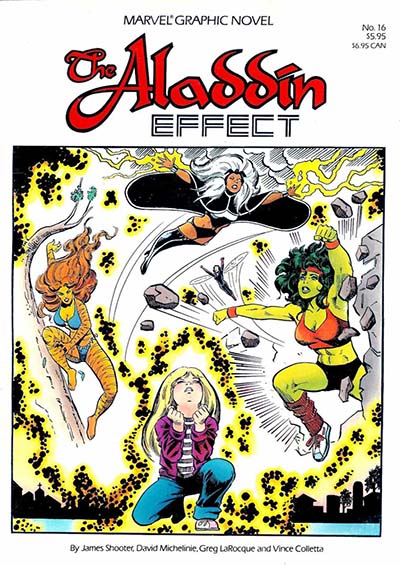 When the small Wyoming town of Venture Ridge is cut off from the rest of the world by an impenetrable force field, only the courage of a little girl will put evil down for the count! At one time, Marvel Graphic Novels were a staple of good reading from the House of Ideas. They treated us to strong-selling licensed characters such as Conan the Barbarian (#19), creator-owned properties such as The Futurians (#9), unique out-of-continuity stories like Emperor Doom (#27), and Marvel’s popular heroes like The Amazing Spider-Man (#22) and Sensational She-Hulk (#18). In April 1985, Jim Shooter thought he might take a stab at changing the reader demographic, which had always consisted of young boys. The stable of super heroes had developed some popular female characters in recent years, and so a story was born.

Nobody can quite figure out how to get to Venture Ridge any more, not from any direction on the map. A couple of months ago, locals just forgot how to get there and no one seems to know where it is. Try as they might, tourists and travelers cannot find there way to the town, which we find out has been trapped inside an invisible forcefield. Cut off from the outside world, the residents have succumbed to fear and desperation, and many citizens prey upon each other for food, cigarettes, medicine and alcohol. No one outside seems to notice the town has vanished, but Sheriff Joe Ember has kept his deputies on the job to maintain order as best they can. However, the townspeople have cowered before the young toughs who demand payment for traveling their streets, and soon people contain themselves within their fortified homes against the threats outside. Little Holly-Ann Ember, Joe’s daughter, isn’t worried, though. She believes in her father and holds out hope that he will keep people safe.

Holly’s last remaining piece of potential kindling for the family fire (which keeps their house warm in a town without gas utilities) is her scrapbook of super heroes. She loves the articles and photos she’s collected of members of the Avengers, Fantastic Four and others. Her most treasured item in the world is soon discovered by her father, who has no choice but to use it as fuel. That night, Holly-Ann’s tears are mixed with a heartfelt wish – a wish spoken aloud – that her favorite heroines: Wasp, She-Hulk, Tigra and Storm, all come to their rescue. The next day, Holly-Ann sees a familiar figure duck down an alley and rushes to find out if it’s really who she believes. A street gang confronts Holly-Ann and wants her coat, which will be valuable in trade, but she refuses and runs away. She then comes face-to-face with the person she sought this whole time and sees that it is indeed Storm of the X-Men! Storm chases the men away, but doesn’t remember who she is until Holly-Ann helps her remember.

At various points, we see that She-Hulk, Tigra and Wasp have also appeared in Venture Ridge and all suffer from Amnesia. Once they recover their memories, however, the women work together (reluctantly, of course) to uncover the nature of the invisible barrier which none of them can penetrate. A mysterious hologram of a person calling himself “The Timekeeper” manifests in front of the town and demands that they turn over the source of power which has been detected, or else face annihilation. It turns out that AIM – Advanced Idea Mechanics – has built a secret research base underneath the town to develop energy weapons. How they have built this invulnerable forcefield and why it makes everybody outside forget how to get to the town is a mystery to which answers are not forthcoming. The townspeople must decide to act upon their fate while She-Hulk goes off half-cocked and gets beat nearly to death by AIM thugs (I’ve always been curious how AIM recruits so many people for “muscle” when their whole schtick is about supremacy-through-science).

It is discovered that Holly-Ann is the power source AIM seeks out. Her wish-granting power was registered last night when she brought her four super-hero idols to the town, and now AIM wants to study this power for their own gain. Sheriff Joe decides to give her up to AIM, hoping that they will run some tests and then leave everyone alive and unharmed. Holly-Ann thinks they should fight back, knowing that giving up and surrendering to evil is wrong. When the crucial time comes, Joe cannot bring himself to give Holly-Ann over to them, he regains his sense of purpose, and her courage inspires the entire town to take up arms against the threat of AIM. The super-heroes lead the charge while hordes of AIM soldiers seem to appear everywhere. Farmers take up arms with pitchforks side-by-side with teenage thugs who, mere hours ago, were shaking down old ladies for their jewelry. Entire families, neighbors, town officials and kids wield baseball bats, crowbars, kitchen knives and anything else they can acquire to take on the overwhelming technologies of AIM. While the super-heroes help the townspeople take down their foes, the leader of the AIM base, The Timekeeper, goes after Holly-Ann…and only Sheriff Joe Ember can stop him! 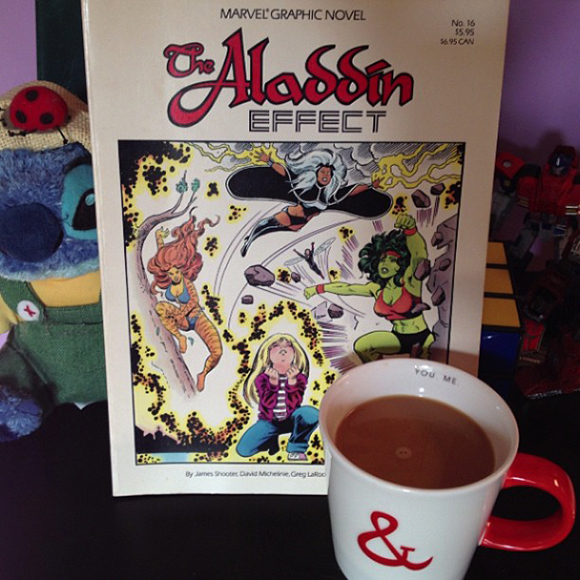 The artwork is certainly on par with most of what Marvel was producing at the time, but certainly not at the level of a Sal Buscema or John Byrne. I find the depictions of the town’s youth-gone-wild to be relatively dark, not unlike in a “B” horror movie from the same era. We only get a vague notion of AIM’s ambitions, why someone like The Timekeeper is in charge (or any reason for his name), or why AIM felt the need to cut off the town from the outside world. For a book which was supposed to appeal to female readers, there are some curious displays of our heroes in little-to-no clothing with gratuitous nudity and profanity, and even a near-rape scene of The Wasp. She-Hulk nearly blows her top when the female villain suggests that she might be a lesbian. Finally, Holly-Ann, while shown to have considerable power, never returns in another Marvel comic despite an invitation from Storm to visit the Xavier School for Gifted Youngsters. The best part of this story is the battle for the town, which puts the townspeople in the position of saving their own butts rather than the super-heroes doing it for them. Holly-Ann adores these heroines, but it is the citizens of Venture Ridge who must summon the courage to face down AIM. I would probably recommend some other editions of Marvel Graphic Novels long before this one, true believers, but it is still a fun read. Fare Thee Well!

Marvel Graphic Novel No. 16, The Aladdin Effect, is written by “Deliberate” David Micheline (based on a plot by “Jaunty” Jim Shooter), penciled by Greg LaRocque and inked by Vince “The Prince” Colletta with a cover by “Klobbering” Keith Pollard and Vince Colletta. Today’s column title adapted from lyrics by The Spice Girls with great respect and appreciation.