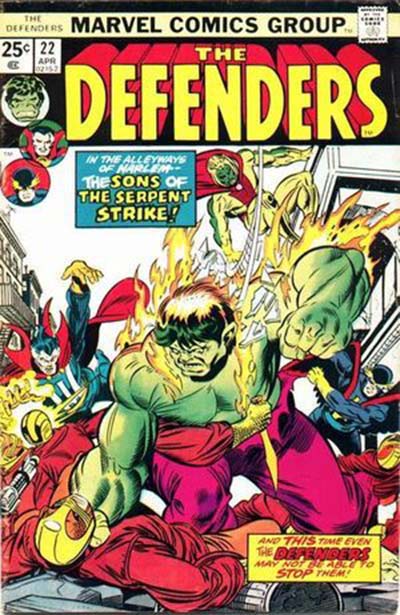 These days, our heroes aren’t treated seriously unless they can turn back a time-traveling tyrant, defeat a diabolical doomsday device, upset a universe-threatening upstart, or arrest an army of alien abominations. Is it the power one wields which puts the “hero” in the super hero? How many innocents must a hero save to demonstrate the courage in their heart? A thousand? A million? A billion? What about the selfless individual who worries less about the galaxy-spanning threats and takes an evening to comfort a lost child? Or the costumed vigilante who makes a point to visit the local veterans hall to thank a handful of soldiers for their service? In the case of the “non-team” of Defenders from Marvel Comics Group, a rotating membership of super-powered beings (and some finely trained specialists) battle a variety of mystical and supernatural threats during their storied career. Yet, these champions put aside their considerable differences and individual agendas to face enemies great and small. It should be noted, however, that those enemies modern comic book readers would consider “small” are still dangerous enough to bring great peril to the lives of your average, everyday citizen.

When The Defenders first formed, they were comprised of Doctor Strange, The Incredible Hulk, Namor the Submariner and, eventually, the Silver Surfer. These were super heroes who didn’t traditionally participate in team activities, but usually didn’t like working with others. Each of these adventurers usually had their own agendas and very rarely partnered with other heroes. As time went on, the roster of The Defenders would change to include a wide range of characters, including the X-man Beast, Hellcat, Gargoyle, Son of Satan and Luke Cage, known as Power Man. By issue #22, the team – or “non-team” as they preferred to be known (since their collaboration was more informal and, unlike The Avengers, without a charter) – consisted of Doctor Strange, The Incredible Hulk, Valkyrie and Nighthawk. These mighty mates must overcome onerous odds to win the day and use their formidable powers to protect the innocent in a tale called “Fangs of Fire and Blood!”.

In the dark of night, Lower Manhattan is a dangerous place. And this lesson is driven home as Barbara Denton, aka Valkyrie, wanders the streets list in thought, contemplating issues of her own origin and identify. When she happens upon a pair of men determined to solve their differences with murderous blades, yet it is HER blade, Dragonfang, which ends the conflict and drives them away to fight another day. Then, a terrified scream immediately follows the fracas, drawing her to a slum-like tenement where, upon entering, she sees a woman frozen with fear, pointing to her apartment and the infant in peril inside! Valkyrie finds a large, rabid rat in the crib of the baby, hissing its frothy fangs at the crying child. With superheroic swiftness, she lunges at the creature, grabs it by its scruff and flings it against the wall, followed by an off-scene piercing of the vermin’s heart by Dragonfang. The mother, however, cannot be consoled like her little girl. She despairs what tomorrow will bring when her welfare check is insufficient, her future is bleak and her child’s chances are slim. Valkyrie insists that the woman, Elena, and her baby accompany her away from this place.

Kyle Richmond, alter ego of the hero Nighthawk, finds himself severely dissatisfied at an event for social climbers and big-wigs. Thus, he departs for a quiet place to relax, thinking that the Sanctum Sanctorum of Doctor Stephen Strange will provide the perfect environment and company for his taste. When he arrives, he finds the less-than-quiet gathering of Doctor Strange, his apprentice Clea and assistant Wong, The Hulk and Valkyrie, all hosting Elena and her baby – both of which find themselves perfectly comfortable sharing an evening with such colorful characters. While Hulk and Clea amuse themselves with the tiny child, Doctor Strange concerns himself with the hardships of her mother, Elena. In fact, Strange surmises, the slums may be illegally unsuitable for human residence, and so the Defenders must investigate this vile place of villainy!

Our merry band decides to fly off and investigate the slums where Elena and her child reside, leaving Wong and Clea to babysit. Meanwhile, the heroes are unaware that other eyes are upon these very buildings… dark eyes, filled with hate which reflects the anger in their hearts… anger which bursts forth from a high-tech weapon aimed straight at the tenements! The cannon fires a blast straight into a building, immediately turning it into a blazing inferno and spreading to the structures next door, even as the tenants wake and escape (the lucky ones, that is). The Sons of the Serpent admire their handiwork from hiding as the smell of burning flesh fills the air. When the Defenders arrive, Elena dismounts Aragorn, Valkyrie’s noble flying horse, to check upon the welfare of her now-homeless neighbors. The fire department is trying to put out the flames, but there is whole other fire brewing down on the street. 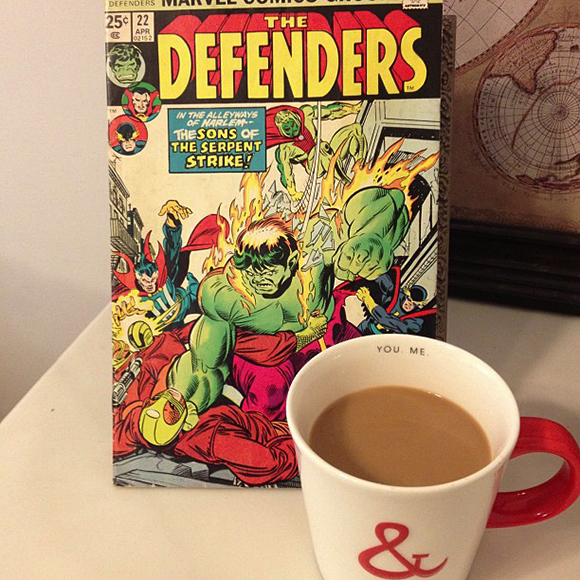 The landlord, a short, pudgy, white man arrives in his limousine and immediately begins accusing a group of young, muscular black tenants of setting the fire. Tempers flare. Racial insults are hurled. The landlord’s judgment is so impaired that he provokes a particular tenant into violence so that Doctor Strange must remove him from the situation while Nighthawk tries to diffuse the tensions among the victims. That’s when the Sons of the Serpent choose to strike! Dozens of green-suited, orange-cowled men come sprinting out from the shadows as their leader demands the safe discharge of the white landlord by these “race traitors”. With the burning of these tenements, the “great white race begins its match to dominance once again”. But then, their leader makes his biggest mistake, and that is to claim that “white and ONLY white is beautiful!”. Hulk hears these boasts and considers that “Hulk is not white”, so the “snake-men” must hate him most of all, and thus the smashing begins. The Defenders make quick work of the Sons of the Serpent, who promise to return in full force as the issue comes to a close.

Regular readers of Marvel Comics possess an understanding of the powers and abilities of those in our story today. While Nighthawk fights with simply his wits, training and gadgetry, the Hulk’s fists can shatter mountains. Valkyrie can go toe-to-toe with the enemies of Asgard. Doctor Strange can manipulate entire realities at will. Yet in the pages of The Defenders #22, the Sons of the Serpent do not turn into a fine red mist when Hulk smashes them. Valkyrie uses her strength and her sword to merely disarm her foes. And Doctor Strange uses his magic to animate fire hoses and wrap up the combatants. This may be a gross mistake to some, but one must allow the story to be told sometimes without subjecting it to stifling rules of characters’ power levels. As we all know, authors can provide a hundred reasons why our heroes made such sport out of a gang of glorified Klansmen. Perhaps they wanted to make an example out of them. Perhaps they were bored. Ultimately, the story was about heroes – those super-beings we admire – taking it upon themselves to help those less fortunate, those impoverished and those preyed upon by race purists. The cover promises that “this time even The Defenders may not be able to stop them!”. That is a claim which rings true as no person or group of people, super powers or not, has ever been able to defeat villains as vile as poverty or bigotry. For those of you true believers who fight against such forces in the real world, the word “hero” should be reserved right next to your name. Fare Thee Well!

The Defenders #22 is written by Steve Gerber, penciled by Sal Buscema, inked by Mike Esposito, colored by Stan Goldberg, lettered by Charlotte Jetter and edited by Len Wein, with a cover by Gil Kane, Joe Sinnott and Gaspar Saladino. Today’s column title adapted from lyrics to the Defenders of the Earth TV show with great respect and appreciation.