We try and make it right but it’s nowhere in sight
It’s somewhere in the brain and you know who’s to blame
You know he keeps smashin’, still we keep on playin’ Head games! 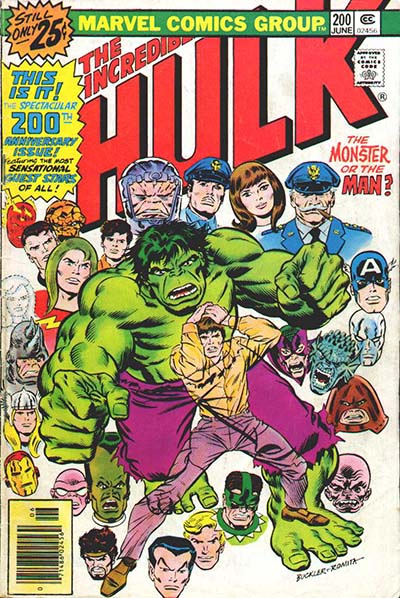 At the risk of seeming like an old fogey who isn’t up with the times, I’ve seen many Marvel titles over the last several years re-launch themselves and start over with issue #1. It’s very rare nowadays for a comic book to reach into the triple digits. At the time of this writing, books such as Fantastic Four is only at issue #12, Thor is only at #13, Avengers is only at #19, and Daredevil is at #31. I am no more able to read the future than I can read minds, but I would be honestly surprised if most of Marvel’s top titles don’t get re-started again before we get to 2015. However, in 1976, one of the iconic characters from the House of Ideas celebrated his 200th issue with a spectacular adventure which would put him face-to-face with no less than 14 of the most powerful and deadly foes he’s ever faced. In fact, this would be an epic battle from which the green goliath would not return!

Within the heart of Gamma Base, a military/government facility in the New Mexico desert, a group of worried people huddle around the mightiest mortal on Earth. Instead of cowering in fear, however, they look to him for salvation. All their hopes lie on the Hulk, momentarily controlled by the mind of Dr. Robert Bruce Banner, to save the waning life of Major Glenn Talbot. The roll call consists of Doctor Leonard Samson, psychiatrist and beneficiary of a transfusion of gamma energy from the Hulk himself. Betty Talbot, wife of the aforementioned Major and former romantic interest of Bruce Banner. General Thaddeus “Thunderbolt” Ross, Betty’s father, commander of Gamma Base and long-time nemesis of the Hulk. Clay Quartermain, elite agent of SHIELD and often compatriot or foil to the Hulk. Lastly, Glenn Talbot, Major in the U.S. Army and right-hand man of General Ross in his efforts to destroy the Hulk.

Previously, the Gremlin (namesake heir of the Hulk’s very first opponent) “erased” the consciousness of Talbot, leaving him in a steadfast coma. Samson has invented a method for shrinking someone to become small enough to enter the human body and seek out the Gremlin’s inflicted affliction, but he needs someone powerful enough to survive the experience. He recruits Bruce Banner and creates an experimental item called the Encephalo-Helmet which, when donned, will allow Banner to control the body of the Hulk. With no more than a few techno-fancy words between men of science, followed by goodbyes from Betty, Clay and ol’ Thunderbolt, Banner steps on the platform and then it’s “Honey, I Shrunk the Hulk”! Samson fires the jade giant right into the brain of Talbot and Banner proceeds to travel the pathways of the mind, a very surreal route which will lead to Talbot’s temporal lobe, assuming the Incredible Hulk can survive the journey.

Spewing forth from the very walls of Talbot’s brain come phantoms which turn into the formidable forms of the Missing Link, Juggernaut and Abomination! While Banner doesn’t possess the pure rage of his ill-tempered counterpart, his survival instinct helps him to dodge and elude his enemies’ attacks, yet when they bear down on him, he fights back with all the Hulk’s awesome power! Samson speaks into Banner’s helmet radio to tell him that these enemies aren’t real, but merely the memories of foes past, produced by Talbot’s brain to act as antibodies and defend his brain against the Hulk’s intrusion. While he easily crushes all further opposition – namely the Leader, Rhino, Sandman and Mandarin – the strain of battle generates a throbbing pulse in the Encephalo-Helmet, which creates an increasingly intense pounding in Banner’s skull that eventually gives him no choice but to rip the helmet from his head, canceling Banner’s control and unleashing the fury of the Hulk within Talbot’s tender gray matter!

Hulk doesn’t know where he is, but he doesn’t like it. Samson, meanwhile, is ripping out his green hair with worry for what the Hulk might do within Talbot’s vulnerable brain! Just when it seems that he might leap right through Talbot’s cerebral cortex, the Major’s brain conjures further antibodies in the form of Namor, Iron Man, Hercules and the Silver Surfer! Each one of these heroes gets a good lick in, but Hulk punches and kicks them into oblivion. The same applies when facing the next set of obstacles – Doc Samson, Harpy and MODOK – and finally defeating a super-sized version of the Gremlin with a hearty Hulk-ism, “Bah!!”. Searching for a way out, Hulk wanders through the ”soft, sticky” twists and turns of Talbot’s brain until he comes face-to-horrible-face with a ghastly creature which is the source of Talbot’s condition. A huge (compared to Hulk), slimy, drooling beast, it launches its snake-like appendages at the green gargantua, speaking to the Hulk about how “Talbot belongsss to meee now… and nnnothing will take him from me.” The grotesque mental block-creature lifts Hulk into the air and prepares to devour him and absorb his strength, but Hulk’s rage triumphs with a monstrous punch and a climactic “Hulk is the strongest one there is!”. His mental block destroyed, Talbot wakes up screaming and then collapses again. Unfortunately, the Hulk has begun to grow, threatening to burst right out of Talbot’s skull! Thus, Samson has no choice but to aim the shrinking ray at the Hulk within Talbot’s brain and shrinks him down into “nothingness” (which we later see transports him to the microscopic “Jarella’s World”). Talbot awakens once again and Samson tells how he was saved by “one of the bravest men I’ve ever known … you owe your life to Bruce Banner … and the Hulk!”. 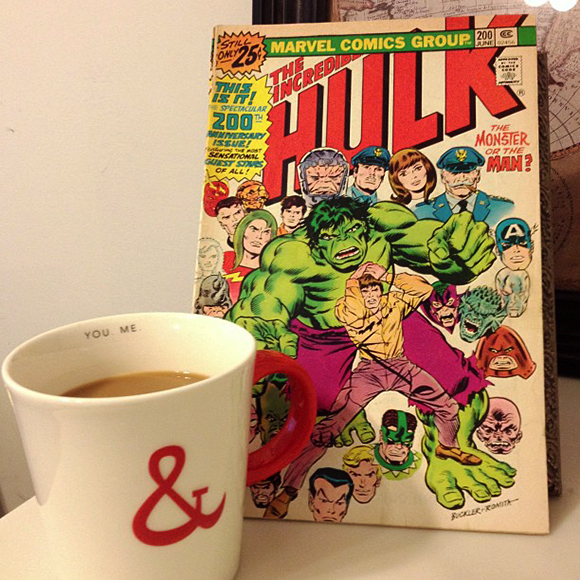 The action gets a little repetitive, but the renderings of Sal Buscema make for an exciting adventure. I imagine that it is difficult to pencil interesting backgrounds when most of the story takes place inside someone’s brain, but Buscema makes it genuinely creepy and mysteriously dreamlike, which creates an appropriate mood. I am able to enjoy the scripting of Len Wein as it is presented without an over-abundance of exclamation marks. This way, when they are present, I more distinctly feel their urgency compared to less-intense conversations. The colors of Glynis Wein are seamless, which is not always the case with Bronze Age books, and Joe Staton compliments Buscema’s pencils with a decent degree of shadows on the characters’ forms and various scenery, although the source of light which illuminates the inside of Talbot’s brain continues to elude me. Buscema is a master of human form, movement and poses, and this book demonstrates his talent as well as any other. However, it is clear how familiarity affected his presentation of certain characters back at this point of his career, for his Hulk, Samson and other familiar characters look amazing while Iron Man, Abomination and Juggernaut suffer (yet Rhino looks great). The notion that Talbot would conjure the Hulk’s enemies and some super heroes as the “antibodies” to fight off an invader is a rather odd idea, but the action is so fast and furious that I never mind any such silliness when I re-read this issue every few years. One of the best lines comes from Bruce Banner: “Well, for manifested phantoms Samson — they pack one heck of a punch!”, which is exactly how I describe my favorite cup of coffee. Fare Thee Well!

The Incredible Hulk #200 is written by Len Wein, penciled by Sal Buscema, inked by Joe Staton, colored by Glynis Wein, lettered by Joe Rosen and edited by Marv Wolfman, with a cover by Rich Buckler and John Romita. Today’s column title adapted from lyrics by Foreigner with great respect and appreciation.