When creating a Godzilla comic book, or even a movie for that matter, pulling it off all comes down to balance. If you devote too much attention to certain factors – factors which might’ve been lacking in a previous incarnation – then other vital components of the work might suffer. In its last two volumes, Godzilla Kingdom of Monsters and just-plain Godzilla (not counting Godzilla Legends, which was more of an anthology, or Gangsters & Goliaths and The Half-Century War, which were both out of continuity), this quest for elusive balance was blatantly evident. Eric Powell, Tracy Marsh and Phil Hester launched this licensed property for IDW in 2011 as “Godzilla Kingdom of Monsters”. They struggled to achieve any kind of pacing with the story, where each issue was devoted to the world’s reaction to the appearance of giant monsters. While ground in the “real world” with at least two characters worth caring about, the story failed to convey anything about the monsters other than to portray them as a terrible nuisance. In 2012, a new ongoing series was created, simply named “Godzilla”, by Duane Swierczynski and Simon Gane. This series told the story of a Jason Statham-like character who pursued a personal vendetta of revenge against the giant reptile with a rag-tag group of hardcore monster hunters. It succeeded in telling a good story about the human characters, but the art was unsuited to this kind of genre. It failed to convey the massive majesty of these enormous creatures, and blurred the imagery when it came to the wholesale destruction of entire cities. Now, IDW Publishing puts Chris Morwy in the driver’s seat, where before he had been limited to roles such as letterer on the earlier Godzilla titles. Fan favorite Matt Frank takes the artistic reigns, making his debut on an ongoing title for a major publisher. 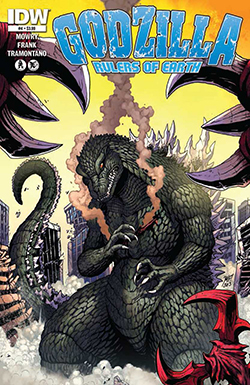 GodzillaRulersofEarth4Throwing such an unknown and untested mixture at an already jaded audience is a pretty risky move for IDW. The sales figures have reflected readers’ growing ambivalence toward a title character which has proven to be disappointing until now. However, fans are starting to catch on to the fresh, new direction this team has taken for a book which has been mired in mediocrity…until now (it was just announced the series received a 12-issue go-ahead). In the first three issues, we’ve gotten more story packed into Rulers of Earth than each of the first two entire series’. Almost in spite of the complex goings-on among the humans, there has certainly been no shortage of action. So far, we’ve had a knock-down, drag-out battle in Hawaii between Godzilla and “Zilla” (the name given to the Godzilla from Tri-Star’s 1998 Godzilla movie), an attack on an aircraft carrier by Manda and Gezora, an assault on a San Diego comic book convention by crustacean-like beasts and an looming alien invasion. This might be too much complexity in some titles, but Mowry and Frank juggle these elements masterfully. While one character from the Kingdom of Monsters series has returned to lead an elite anti-kaiju group (“kaiju” is Japanese for “giant monster”), a young woman has joined a group of kaiju investigators. These people serve a few vital functions: to explain monster activities, add science jargon-filled explanations, help us understand the alien and kaiju threats, and show the readers new monsters. Not once have they slowed down the pace of the story or lacked for relevance, which is difficult to achieve in a kaiju story.

In the last issue, Godzilla was attacked by something undersea and collapsed on the shore of Malibu, California. When he awakes to find a brand-new monster emerging from the Pacific Ocean to attack him (in an AMAZING entrance shot), everybody can see that he’s in big trouble. Injured, weakened and overpowered, it seems like the end for the Big G, particularly when it seems Godzilla’s nuclear beam has no effect on his opponent. Even the aliens orbiting overhead believe that the King of the Monsters is doomed and their conquest of Earth is imminent. When help arrives in the form of another kaiju (one whom I have never particularly liked), I was compelled to cheer aloud in my chair. The way this book introduces each new monster not only makes more sense than its predecessors, but has a much bigger impact. Mowry and Frank work together like a veteran writer-artist duo, which is crucial when many of the pages are action without dialogue. I find myself doing a rare double-take and triple-take on the frames and action sequences, marveling at the expressiveness of these creatures. Every emotion which can be conveyed by a human being is shown on the faces of the kaiju, especially Godzilla himself. I am astounded as I look at one scene where Godzilla opens his eyelids beside an amazed cameraman, then his pupils dilate and readjust to show his giant eyes focusing on the tiny person’s activity. This is something sorely missing from the earlier titles and makes a huge difference, especially when it comes to actually caring about the participants and outcome of these titanic tussles.

This comic book is everything Godzilla fans have been wanting since IDW acquired the license from Toho Co., Ltd. While no creation is ever perfect, Rulers of Earth reads like a cinematic experience and proves that there are still some things that can only be done in comics. Mowry and Frank neither take the story too seriously to have fun with it, nor do they try and impose unnecessary relevance on the human characters or the reality of a world filled with giant monsters. Frank’s use of shadow, realistic backgrounds and attention to detail are impressive, and he never fails to capture the unique character of each kaiju. Not only does he convey expression in the monsters’ features, but they appear not like actors inside rubber suits (like in the movies), but as living, breathing and animated creatures. Any fan of the films will see not only a host of “Easter eggs” hidden throughout the covers and interiors, but many of the tropes for which we’ve come to know in Godzilla movies. Some of the dialogue can appear dense, but as a die-hard fan of Bronze Age comics, I have no trouble keeping up with the text between fight scenes. If you’ve seen Godzilla vs. Megaguiras, you might notice a similarity between the film and comic’s conclusion to the fight, as I did here. It’s a lot of fun, respectful of the source material, and a solid balance between serious artistry and cartoon silliness. It’s hard to justify a $3.99 purchase when previous Godzilla books have proven less than spectacular, but please give this title a try. You will be glad you did! Fare Thee Well!

Godzilla Rulers of Earth #4 from IDW Publishing is written by Chris Mowry, art by Matt Frank (and Jeff Zornow, who created page 22 and the alternate cover), colored by Priscilla Tramontano, lettered by Shawn Lee and edited by Bobby Curnow. Godzilla, Gojira, the related characters and the Character Designs are trademarks of Toho Co., Ltd.