Wreckin’ the desert With the power of a bomb,
Ain’t no monster clown Who is such a phenom.
As ever-lovin’ Hulk! 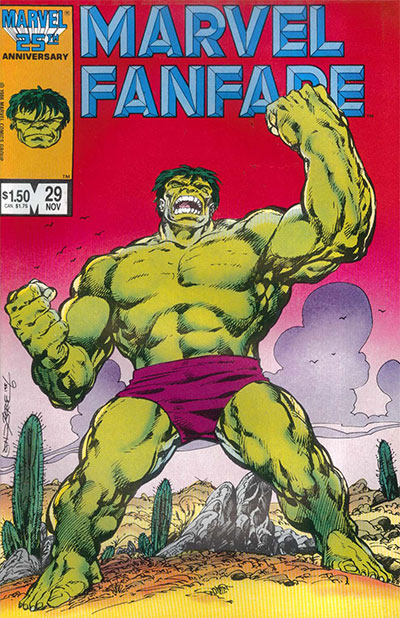 To be honest, true believer, I couldn’t help myself this week. I was all set to knock out the column you see before you and write with great enthusiasm about the premier issue of Strange Tales Vol. 2. But then I opened up a very special issue that grabbed my attention. At the risk of seeming as obsessed as Irving Forbush, I bring to you another tale of the mightiest mortal to walk the face of the Earth, The Incredible Hulk! My loyal front facers are already quite familiar with the high-end format spotlight book, Marvel Fanfare (see Comics ‘n Coffee August 5, 2013). What many do not know, however, is that of all the stories which made it into Fanfare, one of them was meant for another book altogether. Brew up some of your favorite roast as your smash-a-rific scribe spins you a yarn of yesteryear from the Mighty Marvel archives.

John Byrne went to great pains to prepare The Incredible Hulk for significant changes which would have made the title unrecognizable from what it had been over the last two decades. During the mid-80s, at the end of the Bronze Age of Comics, writer extraordinaire Bill Mantlo entered into an agreement with John Byrne to switch titles. After years of scripting The Incredible Hulk, Mantlo took over John’s Alpha Flight and gave over the reigns of the Green Goliath for Byrne to do as he pleased. John had big plans for ol’ Greenie, and they began with Hulk’s dramatic return from his exile (courtesy of Doctor Strange) at the Crossroads, where he proceeded to make a beeline straight for home. “Home”, in this case, was the site of the gamma bomb explosion that had created the jade giant years earlier. This was the first hint that Byrne was planning something significant, since he was returning the Hulk to his place of origin. After fighting phantoms of past enemies, including Rhino, Leader and MODOK, the Hulk was forcibly separated from his alter ego, Robert Bruce Banner. It was this separation which was to be the catalyst for a new direction that would return the gamma-spawned gargantua to his “roots”, or at least Byrne’s interpretation of them.

After six issues and an annual, however, Byrne left the title and headed to DC Comics, where he applied his desire to revamp a character to their flagship hero, Superman. Al Milgrom took over The Incredible Hulk, made a story using the pieces left behind by Byrne, and the rest became Marvel history. Despite the differences between Byrne and editor-in-chief, Jim Shooter, John had been prepared to see his plans to fruition and submitted his next story pages before deciding to depart the Marvel Bullpen. Once Milgrom was tasked with the burden of writing and penciling Hulk’s adventures, however, the powers that be decided to shelve Byrne’s story. It’s not clear why Marvel placed the feature within Marvel Fanfare (it might’ve been related to Byrne’s upcoming return to Marvel’s New Universe title, Star Brand), but due to the high-end nature of the book, it got the upscale treatment it never would’ve seen in the Hulk’s main title. As a result, we received 22 pages which had been written for events long past, combined with an additional, unremarkable tale starring Captain America, all printed on high-quality paper and at double the price of Marvel’s regular comic books.

The thing which makes this story so fascinating is the fact that it’s all in splash pages. While in his main title, the Hulk had just been rejoined with Bruce Banner after they had begun to fall apart… literally… due to their previously mentioned separation. The story in Marvel Fanfare #29, however, takes place when Hulk was rampaging throughout the New Mexico desert after Bruce Banner’s intellect and persona had been stripped completely away. Between incidents where he would be hunted and attacked by Doc Samson and Banner’s Hulkbusters, he would leap miles at a time as a mindless wanderer, displaying no trace of humanity. We begin with a sitting figure, seemingly a shaman-type Native American, who is waiting patiently and seems to know that the one for whom he waits will arrive at any moment. The Hulk then suddenly lands without ceremony, assuming that the seated old man is a threat, and rears his fist back to smash this threat into a fine pulp. However, he pauses when the man looks up and says a single word: “Friend”. Hulk dwarfs the frail figure, yet somehow the man persuades the giant to rest his weary limbs with another single word: “Sit”. He then adds some chemicals to his fire which create vapors which send the Hulk into a trance. 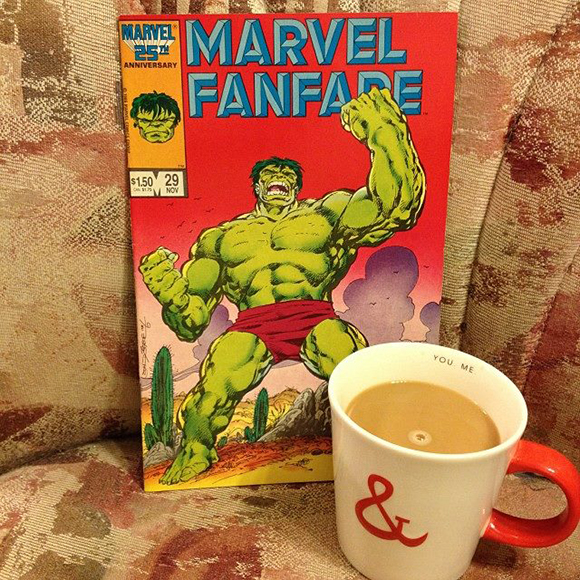 In the span of a few full-page frames, we learn that the old man is not what he seems, but that he is awaiting some others – “targets” he calls them – and he is confident that the Hulk is merely in an entranced state, certainly not engaged in thought. His assumption, however, seems dubious as we learn that the Hulk’s trance comes with images flashing in his memory of friends and foes from his past. His meditation is suddenly halted, however, when two of the foes from Hulk’s distant past, Hammer and Anvil (from Incredible Hulk #182) attack him from behind! These two super-villains are armed with an alien manacle which binds the men with a golden “chain” while giving them enhanced strength. Hulk is being strangled by said chain, but quickly breaks the hold and bears down on the smaller creatures who dare disturb his rare moment of peace. Just when he is about to pound them into jelly, however, a handgun-type weapon is reared from behind a large rock and blasts Hammer’s face into oblivion. Sadly, not only did the alien technology give the duo shared powers, but also shared life force. Therefore, when “Hammer dies, Anvil dies too”. Hulk peers around the boulder to investigate the cause of the loud, destructive noise, but all he finds are some fresh tire tracks, discarded clothing and a mask resembling the old man. He holds up the mask, staring at it in a mixture of confusion and sadness, and a question escapes his emerald lips … a single word, the only word he would ever speak while separated from his alter ego: “Friend?”.

It’s easy to see the simplicity in these pages, particularly due to the spartan and almost colorless backgrounds. However, Byrne’s mastery of the human form is quite evident, as is his skill with facial expressions and body movement. He also has an amazing talent for drawing rubble and muscles. His images of Hulk are of a beast which has an abundance of muscle mass on every part of his body, including his face and every digit of his fingers. He pulls off a not-so-easy feat, which is to tell a compelling story in only 22 frames. It requires a skilled touch to have captions, dialogue and imagery communicate the ideas in proper balance, and Byrne does so very well. It sure gave me a lot to think about, too. In reading only the issues of his main title, I always saw the Hulk as completely mindless while separated from Banner. However, the fact that he thinks and speaks in this story have made me doubt that mindlessness. Our column shall forever be of the utmost astuteness, culture lover, for we in the Smash Cave are ever dedicated to that eternal credo – Nil Nisi Optimus – Nothing But The Best! Until next time, my friend, may the Vishanti look upon you with favor, as long as you always remember to take a troll to tea! Fare Thee Well!

Marvel Fanfare #29 is produced in two parts, the first written and rendered by John Byrne, lettered by Jim Novak, colored by Andy Yanchus and edited by Al Milgrom, and the backup story written, rendered and lettered by Norm Breyfogle, colored by Bob Sharen and edited by Al Milgrom. Today’s column title adapted from The 1966 Hulk cartoon with great respect and appreciation.