Cosplay Girl of the Month: October 2013

One of the features we do here at Comic Impact is the cosplay girl (NO anime, manga, role-playing games just comics) of the month, that’s right hot girls dressing up like your favorite super- hero characters. This month we’re privileged to have Stacey Rebecca as the Cosplay Girl of the Month 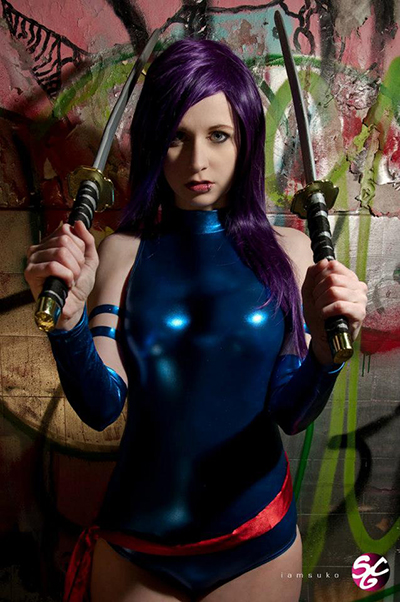 1-What is your name?
My name is Stacey Rebecca… And that really is my real name!

3-Do you read comics and if so, what are your favorite titles?
I don’t have a huge amount of time to read comics these days so I’m quite picky – but I will usually read anything Batman related.  My all-time favourite titles are Hush, The Killing Joke and Batman RIP.  I have a pile of trades that have been brought home for me to read that comes up to me knee, I am so behind!

4-What is your favorite comic book character?
It’s always been Batman.  Always.  I’m obsessive about him.  I also really love Scarecrow and Zsasz.  There’s nothing more exciting to me than a bloody good villain.

5-Who are your favorite artists or writers?
Tough question!  Brian Michael Bendis, Grant Morrison, Jeph Leob, J Scott Campbell, Chris Bachalo and Brian Bolland are all at the top of my list.

6-What got you into cosplay?
A combination of being really into Halloween and modelling.  I made a Psylocke costume for a fancy dress party and decided to use it on a photoshoot as an experiment… And it went from there, really!  It was just a super fun way to integrate more nerdiness in my modelling and express myself in a new way.  I was hooked from day one!

7-If you do more than one character which one is your favorite, and if you do only one do you have some ideas for more costumes?
There are too many to choose from!  Obviously Mary Jane has a special place in my heart but it terms of costuming it’s a pretty safe option, and I very rarely wear it to conventions or anything.  I think my favourite costume to wear is Magik (Uncanny X-Men) – I feel like such a badass strutting around with my shiny black spandex, spikey armour, big goth boots and gigantic sword!  What’s not to love?!

8-How long does it take for you to make a costume?
I work full time and I’m studying for a maths degree too, so I don’t have a huge amount of time for cosplay in between.  So it probably takes me about a month to put a whole costume together, depending on the intricacy.  Regardless of how much time I have, there’s always a mad rush the weekend before with all of the energy drinks and none of the sleep!

9-Have you met any of the artists or writers where your costume is based on their work?
I was lucky enough to meet J Scott Campbell this year, which was super rad – he was so supportive of my Amazing Spider-Man #601 cosplay from the start and he was an absolute sweetheart.  It’s always great when you meet your heroes and they are not only talented but genuinely nice people, too.  I would love to meet so many artists and writers as their characters, it’s a really fun thing to do. 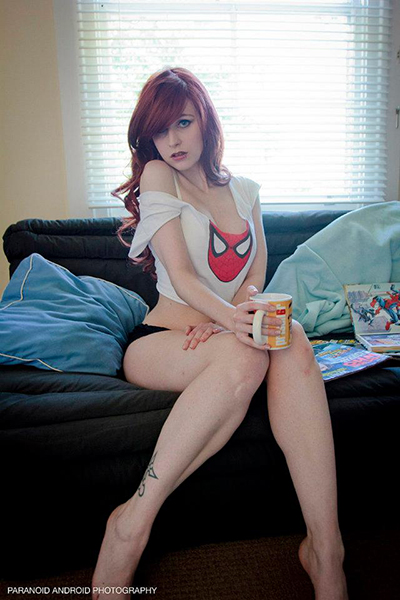 10-Do you buy any toys, busts and etc. based on some of your favorite costumes?
YES!  My boyfriend runs a local comic book shop so he often brings me things home and tells me the moment something comes in that he knows I’ll want.  We have a slight addiction in our house for the Kotobukiya bishoujo statues, I think our combined count is somewhere around 10…  I also buy pretty much every Assassin’s Creed statue that comes in – there’s an area of the house dedicated to all my assassins.  I can’t wait to get the new Edward one!

11-So do people know you dress up like a comic book hero on your free time?
Most of my friends and family know, yes.  Work colleagues not so much… They hear bits here and there, but I don’t think they know the full extent of what goes on at the weekends!

12-What is the funniest thing that has happened to you at a convention?
Pretty much every convention I go to, I end up spending all of Sunday hungover.  At a recent convention in London, I was filmed saying, “NO” to a child asking me to buy her cookies in a bleary-eyed, oh-god-please-don’t-speak-to-me, Bernard Black kind of way.  It was on national television.  I looked like a right dick.  Funny though.  Don’t drink and cosplay, kids.

13-Do kids come up to you and think you are the real life character?
I’ve never had that, actually!  That might be something to do with my habit for cosplaying lesser-known or slightly scary characters.  Oops.

14-What do you like to do when you’re not costuming, such as other hobbies?
Gaming!  I love action/adventure games and RPGs, I hate multiplayer and at the moment I split my time equally between my Xbox 360 and my PC.  I’m also really into comedy so spend as much time as I can watching US and UK comedy shows, and watching live stand-up.  There’s nothing better than going to a comedy club to giggle after a hard day at work!

15-Do you have a website or a Facebook? So people can contact you?
Yep!  My main point of contact is my Facebook page (facebook.com/staceyrebeccaaltmodel), you can also find me on Twitter/Tumblr/Instagram as @Staceyofgotham, and you can grab personalised signed prints at staceyrebecca.storenvy.com 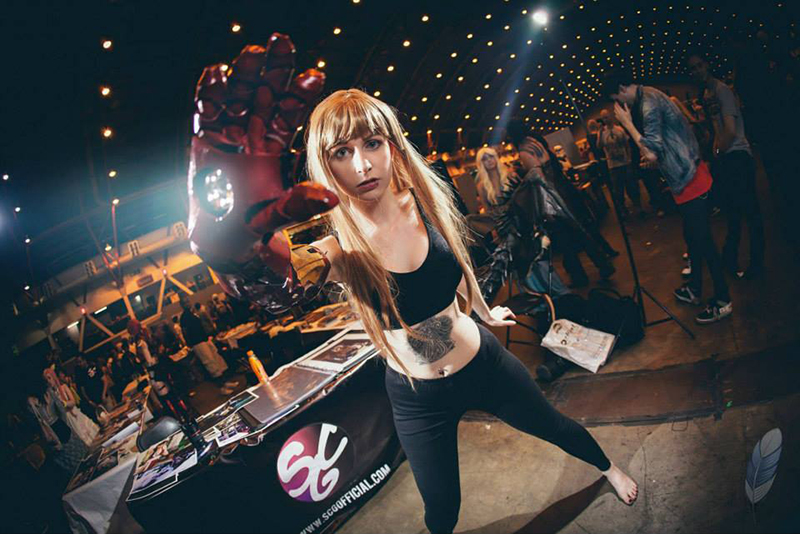