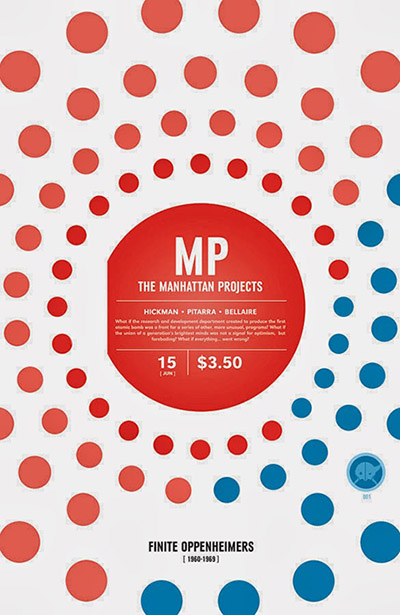 This is technically the second part of the Finite side story of Robert Oppenheimer. I consider it to be somewhat the third part, because the first issue of the series was titled, Infinite Oppenheimers, and served as an origin story of sorts for the character. For this issue, the regular art duties of Nick Pitarra have been subbed by artist, Ryan Browne. I could tell a slight difference at first, but it wasn’t a negative. It was a nice contrast to accompany this interlude that deviates from the main story, yet still has the definitive feel that the book is known for. Oppenheimer is by far my favorite character of the series and I find him so interesting that I would easily buy a series featuring only him.

The Oppenheimers are made up of twins, Robert (blue) and Joseph (red). Robert was a genius and live a privileged life, while Joseph was a cannibalistic, tortured soul. Joseph hunted down his brother, Robert, killed him, and consumed his corpse, taking on his identity and his place on the Manhattan Projects. It is shown that whoever he consumes, will then have their souls trapped inside his mind. Since Joseph is the ultimate “ruler,” all the twisted incarnations of who he’s consumed are red, except for Robert Oppenheimer, who is seen as blue.

This issue serves as a peek into the civil war within Oppenheimer’s mind, which in turn, helps better explain his motivations and quirks in the main story. It shows how Joseph is the one running the show and how Robert is desperately trying to gain control. The Reds are made up of barbaric, giant, and other demonic Oppenheimers. Robert finds a way to convert others to his Blue Army and are made up of eyeless soldiers of every region and era. My favorite characteristic of the Blues is that they are represented as the “enlightened” ones and communicate in various algebraic equations. Just as Robert starts to feel victorious, he is ultimately thwarted by his brother because within Joseph’s own mind, he doesn’t play by any logical rules and essentially writes them as he goes.

This book continues to be like nothing I’ve ever read before and smarter than most novels I’ve read. I’m very proud to recommend this thought provoking book to anyone who assumes that comics are filled with “Pow!” and “Wham!” and are only geared towards children. There are few, in any medium, who write as brilliantly as Jonathan Hickman.