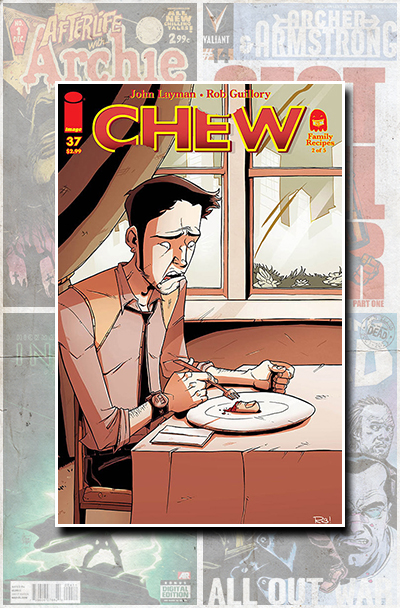 NEW ONGOING SERIES! “Escape From Riverdale” — This is how the end of the world begins… Harvey Award-winning writer Roberto Aguirre-Sacasa (Carrie, Archie meets Glee) and Eisner-winning artist Francesco Francavilla (Batman, Black Beetle) take Archie and the gang where they’ve never been before-to the grave and back! A horrific accident sets off a series of grim events and Sabrina the Teenage Witch must try to repair the unspeakable evil her spell has unleashed. Gasp in horror as Riverdale faces an impending zombie Arch-pocalypse in this brand-new, spine-tingling ongoing series — but be warned, kiddies, this one’s not for the faint of heart! For TEEN+ readers.

All-new arc, all-new jumping-on point! SECT CIVIL WAR starts here! Every enemy. Against each other. For centuries, the cloak-and-dagger coalition of conspiracies collectively known as The Sect has worked together to bring silent oppression and undercover tyranny to a world that thought it was free. But, now, after centuries of profi t sharing and uneasy alliances, the factions of The Sect are about to erupt into open confl ict…and the only men that can end the insanity are Archer & Armstrong! Too bad they’re fighting for different sides! Why? How? And will either survive? The knockdown, drag-out A&A event of the year starts now – and no conspirator is safe!

Chew #37 – By John Layman and Artwork by Rob Guillory 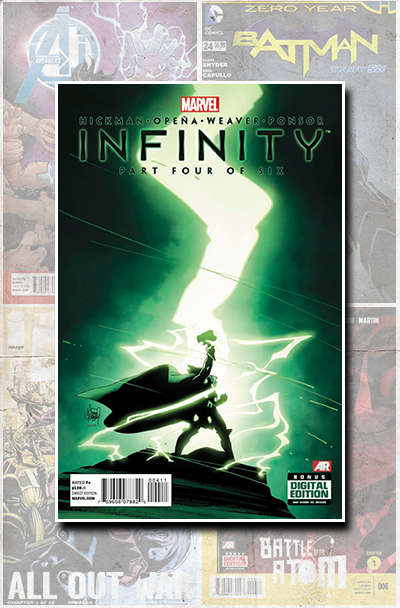 With the Vision M.I.A., and A.I. considered a global threat, what’s a robot to do? Teaming up with S.H.I.E.L.D. the Avengers track down cyber terrorist Dimitrios’ signal and prepare to take him out.

Batman is on the trail of the Red Hood Gang and their mysterious leader, secret origins are revealed, and a major surprise will change the course of Zero Year and Batman’s life. “Zero Year” part 4.

BATTLE OF THE ATOM PART 7

Chaos at the Jean Grey School as the X-Men and Future X-Men are attacked! Rachel Grey is the only X-Man qualified to defeat the mystery opponents!