I tried to be a future warrior –
But the Martians ever came –
I know now, fighting to be a freeman –
Finally found myself –
Fighting for a chance! 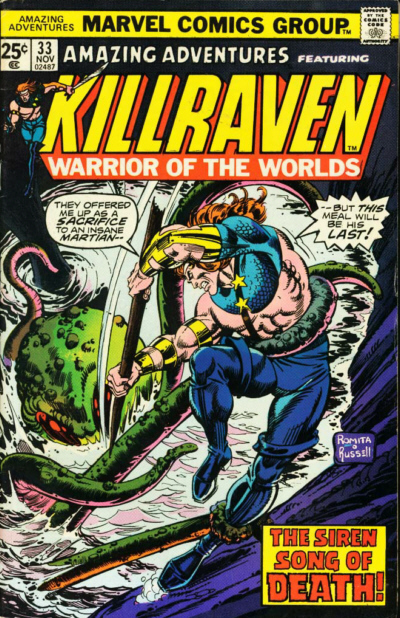 Even to this day, I find myself reading comics about characters of which I have no previous experience or knowledge. This is the fun of back-issue bin diving: finding new heroes, stories and universes which bring us sheer joy and spark our imaginations! Earlier this year, I shared with you my very first experience reading a book about the cyborg, Deathlok, in the far-flung future of 1990. Now, another hero from days yet-to-pass comes before me in the pages of Amazing Adventures published in November 1975. It stars Killraven, a long-haired man living in a future world where humanity is dominated by Martian invaders. One of my most valued tenets in the creative arts is the idea that a good story can stand on its own merits, not dependent on any prior knowledge of the characters or their history. If this story can achieve such a feat, then I am likely to value it as a strong work of art. Let’s enjoy this issue together, my friends, and hope that the story gives us some solid insights into Killraven, Warrior of the Worlds!

Killraven and his cohorts make their way across the countryside as the issue begins. We learn they are fugitives who escaped their Martian captors. As such, they are on the run, these four: Killraven – long-haired and partially donned with chainmail, M’Shulla – a dark-skinned warrior who Killraven calls “mud-brother”, Carmilla – a raven-haired beauty who seems to enjoy giving Killraven a hard time, and Old Skull – a dull-witted strongman who seems fiercely loyal to Killraven. While they seek shelter from their alien pursuers, the companions are oblivious to a writhing tentacle which snatches an innocent bird from a tree, presumably as an afternoon snack! Soon, Old Skull spots a cave and the quartet makes camp for the night to await some fellow refugees, some “freemen to catch up”.

While Old Skull takes the first watch, Killraven explores the deep of the cave. Long into his journey, he is stunned to find an underground lake and a number of dwellings off into the distance. Suddenly, he is swarmed by all sides by a group of dark-skinned foes! “Jump the honky, now!” and “Teach whitey his place!” are the exclamations we hear, and many similar comments come along as the locals take Killraven prisoner. We learn that many members of the African-American community fled underground when the Martians invaded Earth years ago in 2001 (the story takes place in 2018). Killraven is rather confused by the whole experience, however. He doesn’t understand why they all look upon him with hate and distrust. The references to him as “white”, them as “black”, and terms like “honky” and “the kay-kay-kay” have no meaning to him. What is crystal clear to him, though, is the animosity his captors feel toward him. They intend to murder him solely for the color of his skin.

All the tension comes to a head, however, when a crazed Martian emerges from the lake, snatching one man from the shore and dragging him underwater to serve as its next meal. Then, just as the entire village hopes the Martian is satisfied, the monstrous fiend emerges again and grabs the leg of the man who was just about to slay Killraven. Killraven looses his bonds and dives down into the lake after him, using his sword to slice the tentacle holding its victim from the Martian’s body! One moment a captive and the next a savior, Killraven becomes tangled by the Martian’s remaining tentacles to take the place of the man he just saved. However, the man who had just minutes ago planned to end Killraven’s life now dives back down, spear in hand, and the two men finish off the creature together. 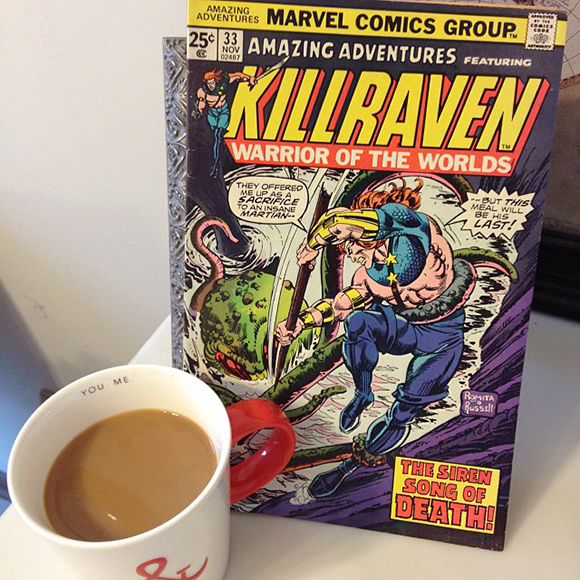 Killraven regains consciousness surrounded by the underground people, but this time it’s to smiling faces and greetings such as “Welcome, whitey! Welcome back!”. Now that they have seen how a white man will help them gain freedom from the Martian oppressors, they plan to leave the caves to rejoin the surface world. A few words of mutual respect and a handshake later, and Killraven takes his leave, finding his companions still asleep near the mouth of the cave.

First off, the cover to this book is simply phenomenal. John Romita truly deserves his reputation as a legend, and my feelings about the interior pages would be much different if he had done the artwork. Still, Trimpe does a serviceable job and keeps the story moving. Although this story takes place in an apocalyptic future, there is an attempt to keep it grounded and relatable to our time. Unfortunately, when the characters use phrases like “I’ve brought home the bacon!” and “Read any good books lately?” come across as confusing in context and somewhat forced. I’ve since learned that the Killraven title has the unprecedented honor of being the first comic book to feature an intimate interracial kiss. While this is another of Mantlo’s “fill-in” issues – where nothing in the story affects continuity – he makes a genuine attempt to incorporate social relevance (not uncommon in his books). The racial message is a strong one here, making me squirm in my seat (unless that’s just too much caffeine), but still is simple and innocuous. I enjoyed an innocent and harmless story in this Killraven comic, but when I look at that Romita cover, I imagine what could have been some truly Amazing Adventures! Until next time, frantic front facers, Fare Thee Well!

Amazing Adventures #33 featuring Killraven, Warrior of the Worlds is written by Bill Mantlo, penciled by Herb Trimpe, inked by D. Bruce Berry, colored by Janice Cohen and lettered by Karen Mantlo, with a cover by John Romita and P. Craig Russell. Today’s column title adapted from “The Kill” by 30 Seconds to Mars with great respect and appreciation.