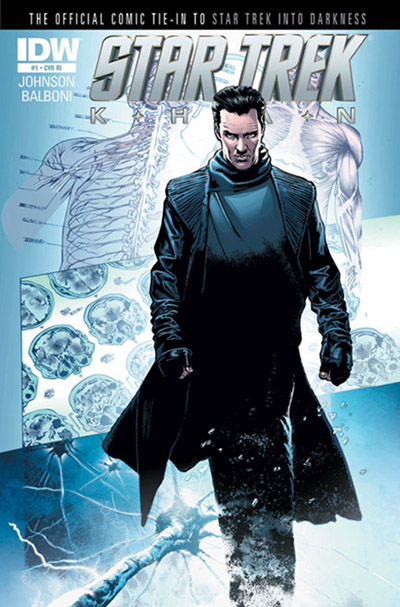 One of my favorite movies of 2013, Star Trek Into Darkness, came as quite a surprise to me. I noticed that this movie has been met with mixed reviews, the more negative being from long time fans of the many series. I have also been a fan of the original series and TNG for quite some time, but I tend to welcome changes and new storytelling concepts with open arms. The movie is not without its flaws, but I was able to view it as its own universe, without getting hung up on what is and is not canon. One of the issues fans took to this reinterpretation, was that one of Star Trek’s most well known villains, Khan Noonien Singh, was portrayed by British actor, Benidict Cumberbatch. Star Trek: Khan is a 5 part mini-series that serves as an origin story that will jump back and forth between his early years and the present day, but will basically bridge the nearly 300 year gap between his upbringing, leading up to Into Darkness.

The story starts a few months after the events of Into Darkness, as Khan is brought to trial for the havoc he wreaked during the movie. The Federation court, and Captain Kirk, directly mentions the fact that the only records they have of Khan contradict the appearance of the man standing before them and they demand to know the truth. Flash back to 1970s New Delhi, orphans are abducted and put into a super soldier program. A young Noonien Singh shows the most promise because of his savagery and thirst for knowledge. As the genetically enhanced students have reached the end of their training, Noonien and his comrades have learned everything they can from the program and decide to leave on their own terms. Noonien effectively lures the scientist responsible for their programming out into the open and kills him, ending the issue with Noonien urging his “brothers and sisters” to venture out into the world with him.

The mini-series is written by Mike Johnson, who has been writing the current ongoing series since 2009, with consulting assistance from movie writer, Robert Orci. The art duties are split up between David Messina for the present day sequences and Claudia Baloni, who has also worked on the current series. The shifts between the past and the present are hardly noticeable and the dual art styles work together quite well. I wasn’t sure about picking up this book in the first place, but I was intrigued by how they would link the stories together and explain the character differences, other than being from alternate timelines. The first issue served as merely a set up, but was set up well enough that I can’t wait for the next issue to see where the story goes.