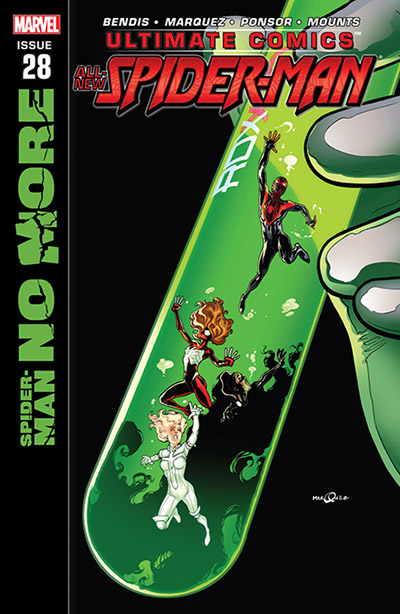 This is the final issue of Ultimate Comics Spider-Man before the big Cataclysm event. It’s hard to tell what the future holds for the entirety of the Ultimate universe, but I would find it hard to believe that this is the last we’d be seeing of Miles. Regardless, this was a well written conclusion to the Spider-Man No More arc where Spider-Man and his makeshift team of Spider-Woman, Cloak, Dagger, and Bombshell face off against the man responsible for bestowing their super powers, Roxxon and his crew. Miles Morales is by far my favorite Spidey to don the suit and it’s good to see him once again answer his calling, just a year after the tragic death of his mother, serving as his own “Uncle Ben moment.”

After the team takes down the hitman known as Taskmaster, they head to the Roxxon Corporation and confront head of the company, Mr. Roxxon. Each member of the impromptu team has their own distinct personalities. Bombshell, the onetime antagonist, acts as the impatient one, while Cloak and Dagger have a bit of an edgy attitude. Miles is his usual upbeat self (except when the subject of his mother is brought up), and Spider-Woman serves as the surrogate mother of the bunch. Roxxon comes across as somewhat of a one-note bad guy, but it is made up for during the final confrontation. Through an entertaining telling of an exasperated Miles, the Roxxon president is web-slung upside down on the side of his own building, as he spills the entire truth of the group’s origins to an attentive Spider-Man.

There is so much that I loved about this issue. Bendis has been killing it on this book and I feel like he has been doing a great job writing from the perspective of a young teen. He has made Miles relatable, sympathetic, and comedic. I also love the reimagined versions of Cloak and Dagger. I couldn’t care less about them in the 616 universe, but Bendis has managed to make them interesting to me. Marquez continues to be one of the best artists out there and Ponsor’s colors really bring each panel to life. I always love the action sequences because they flow so naturally, something that few comic artists are able to capture.