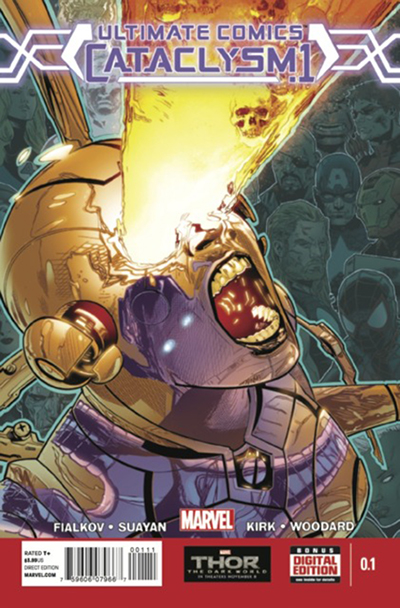 I’ll be the first to admit, just about the only Ultimate Universe title I read is Spidey. I had started reading Ultimates and X-men, but ended up dropping those books a while ago. It’s a shame because I have heard some very good things about those books and with the looming rumors of the Ultimate Universe coming to an end, I can’t help but wonder if I played a small part in its untimely demise. All this to say, even though I’ve been suffering from “Event Fatigue,” as Simon and Sheldon put it, I have been anxiously awaiting this particular story-line. I can’t say definitively if there needed to be a #0.1 issue, but I felt this issue was executed quite well. Like I said, I only currently read Spidey, but I didn’t feel left behind or confused by anything that took place. And actually, in only a few pages, I started to feel very much for these characters I know virtually nothing about.

This quick set up before the main title is about the Ultimate Vision and her attempts to bond with this world’s Falcon. Her time on Earth is cut short as she discovers the existence of Galactus, signifying the Earth’s imminent destruction. She travels out to space to intercept the Devourer of Worlds, engaging in a battle for the fate of her world. What was predicable was that Vision’s feeble attacks would fail against the unstoppable cosmic entity. What I did not expect was for the ending to pack as much emotional punch as it did. In all of Vision’s trying to relate to human emotions, what she comes to realize is that all the while, she had been using her programming to suppress the emotions she was too afraid to feel. In her “dying” moments, she uses the last of her energy to transmit one last message to Falcon: that she loves him.

While this issue may not be necessary to readers who aren’t interested in the prelude to Cataclysm, it helps add perspective to the threat that the Ultimate heroes are facing and what’s at stake. Fialkov does a great job telling a story that doesn’t leave out new readers, as well as moves the story forward towards the main event. He manages to add humanity and importance to the love story between Falcon and Vision, while focusing on their impeding doom. The three artists that collaborate on this issue, Suayan, Pierfederici, and Kirk, are impressively very hard to detect. They work together seamlessly and all have an aesthetic I find commonly within the three Ultimate titles. This story was exactly what I needed to jump start my interest into the unfolding story.