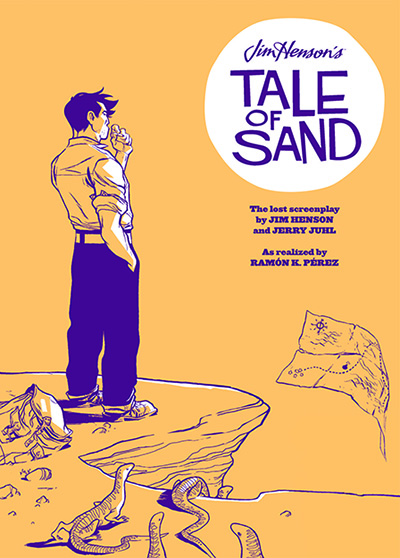 September 23, 2013 would have been his 77th birthday and even in his absence his vision still touches the world. His Sesame Street program has been on the air here in America for almost half a century, broadcast in over 120 countries and has 20 international co-productions with its own regional rendition of the series. The Muppets have made a resounding comeback in 2011 with a sequel on the way following a career of two television series and 6 prior films and his independent works have become cult masterpieces.

There is a forgotten work which never made it to the big screen. Written in 1967 Jim Henson and Jerry Juhl crafted the first draft to a screenplay, a surrealist adventure story. Deemed to complex to film due to the technological constraints at the time it sat untouched and un-produced for 44 years that is until its publication by Archaia in 2011.

Overseen by Lisa Henson and brought to life by artist Ramón Pérez (Wolverine and the X-Men). The story begins as meer prose, transitioning from script page to gorgeous full color art as we follow our protagonist Mac who arrives in a hazy state. A stranger in a strange land, sent on a quest through ever-changing locales facing both man and monster to reach his journeys end all.

This book comes as one of my highest recommendations. A mysterious world that makes for a modern day tale from Wonderland our protagonist marches through like a lucid dream. It’s a masterful adaptation with epic art and winner of three Eisner Awards (Best Graphic Album – New, Best Penciller/Inker or Penciller/Inker Team and Best Publication Design) and deserving of every one. This book is gorgeous in every aspect from the paper stock the art is printed on to the cover its bound in. This is not only a must have for any fan of Jim Henson but deserves a place every readers bookshelf.