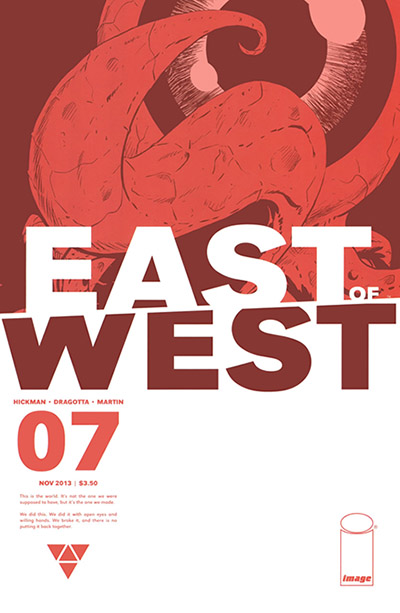 No surprise, Jonathan Hickman’s latest installment of his creator owned sci-fi Western was my favorite comic of the week. It’s easily in my top 3 current titles and the book I look forward to the most every month. My one complaint is that just as each issue gains momentum, it feels like it ends abruptly. There is still an air or mystique to the world of East of West and I can’t help wanting to know all I can about how this world became so very different from what we know today.

This issue brings us back to the present day with Death and The Chosen after the last issue, which deviated from the main story-line and introduced a new character, The Ranger and his hunt for The Chosen, to the expanding dystopian world. The story covers the next step for Death and his avatars looking for The Lady in a magical location, but more so gives a back story to how the early introduced, Ezra Orion, came into his current unfortunate circumstance. The Three Horsemen are better fleshed out through a flashback of Ezra’s origins as Conquest’s adopted son, which adds to the overall world building, showing an example of the blind faith these people have. Just as you think you see some humanity in Conquest, he chooses not to end the suffering of his son, Ezra, in the name of fulfilling the prophesy of The Message.

Hickman’s writing may be hard to follow for some, but out of all his titles, I feel this one is the most accessible. Every character seems well thought out and feels as if they will ultimately have a much bigger purpose, therefore making the story more immersive and interesting. Much of the creative credit is due to the artistic choices of Dragotta. His stylized designs are beautiful and exciting. He has explained that he didn’t want to create anything too busy that it would be hard to illustrate action sequences or that would not suffer a loss of detail from a distance. Martin uses a basic three color technique, which helped distinguish the feeling of this book from the very first issue. His minimalist approach is done so well that this title stands out from any other comic on the shelf.