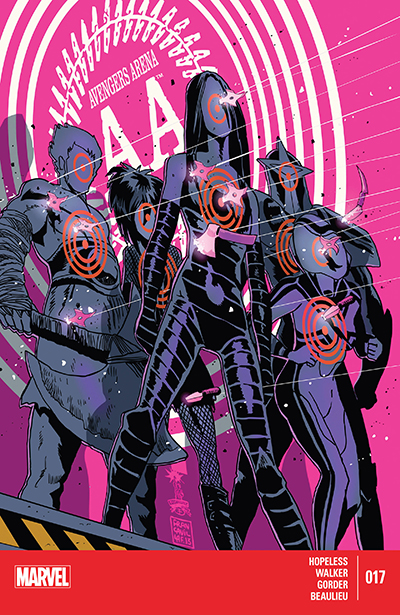 This series was met with much resistance when it was first announced. Writer, Dennis Hopeless, even received death threats when this book hinted towards killing off many of people’s favorite characters. But the one thing that the writer maintained was that nothing is as it seems on Murder World. I’m not sure what mind bending twist may be coming up, but I’m glad I took heed to his warning cause this book has been pure fun and action in every issue.

Just one day remains for the reluctant inhabitants of Murder World in the sick game that Arcade has orchestrated. In the fourth part of the five part Boss Level arc, the action is still full bore and doesn’t show any signs of letting up. In this issue, the young heroes are still at each other’s throats on the surface while Apex, Death Locket, and Chris Powell get the jump on Arcade in his secret control room. He is able to make a clever getaway, but as the others step out of the room, Arcade appears on a monitor and seemingly persuades Apex to let the game play out to the end so that she can be the hero as the sole survivor of this horrible ordeal. She watches as the group continues to tear each other apart, Hazmat seems to be in certain danger, and everything is complete chaos.

I’ve been having a lot of fun with this book because some of my favorite characters are the more obscure, lesser known and newer characters of the Marvel U. I have been grateful that characters from the Runaways and the Avengers Academy are able to have a voice and not be forgotten amongst the bigger books. The younger characters have always had a bit more of an edge to me, giving writers a little more freedom to try things that wouldn’t fly in most of the mainstream titles. Hopeless has also managed to make Arcade somewhat of a badass and much more menacing, thanks to his depiction in this book. I’m anxious to read the final chapter of this arc and see what else could possibly be coming. This series has been exciting and dangerous and feels like anything can happen, which is something a lot of other titles are missing. Even with the announcement at NYCC that some of our heroes will move onto Avengers Undercover, I’m sad to see this book coming to an end.