Can the shining superstar realize her big-time dreams or will she perish before the pernicious power of Doom? 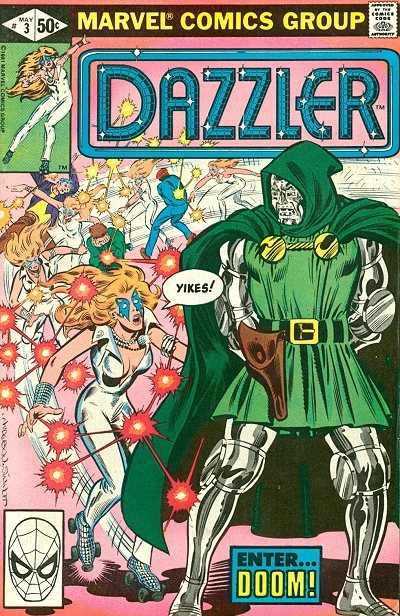 With all the recent success of Marvel Studios and the Marvel Cinematic Universe, it takes some serious recollecting to travel back in time to when Marvel offered less-then-spectacular films on the silver screen. In fact, there was a period when Marvel Comics Group – despite all Stan Lee’s efforts to find a willing studio in Hollywood – couldn’t catch a break in bringing their Spandex-clad characters to life within a motion picture. Finally, the Casablanca Records label and Filmworks movie studio commissioned a project called “The Disco Queen” which was to feature a singing superhero from Marvel Comics. The plan was simple, a new disco-singing heroine would be introduced in the pages of Uncanny X-Men, feature prominently in Amazing Spider-Man, Fantastic Four and other titles, and then become a character in her own blockbuster movie! Artist John Romita Jr. originally conceived her as a mutant resembling Grace Jones (model, actress, singer) and she would possess the power to make people tell the truth. The movie studio, however, had other ideas, namely that she should look like sex symbol Bo Derek, and former Archie Comics writer, Tom DeFalco, took over the character and decided to give her light-based powers, changing her name to “Dazzler”. Unfortunately, Casablanca hit some financial turbulence and backed out of the project. All of this took place in the mid-to-late 1970s, where disco was a prominent cultural phenomenon. Sadly, disco’s popularity began to wane, and the Dazzler project was canceled “five or six times”. But instead of throwing in the towel to their dream of a singing superhero, DeFalco and Jim Shooter refused to yield.

Dazzler was finally launched in 1981 exclusively to specialty comic shops, a bold move considering the norm had always been traditional newsstand distribution. It struck a chord with readers, however, and the premier issue sold 400,000 copies – which was double the average comic sold at that time. Despite the decline of disco music, Dazzler was a hit. As was the custom with new titles at the time, Dazzler featured many guest appearances of Avengers, X-Men, Hulk, Spider-Woman and other popular heroes of the day. Alison Blaire would need to learn how to master her powers and find her place in the world, but it would be a while before she discovered how to balance her life as a musical artist with that of a super-powered mutant. By her third issue, she had gained an influential agent who wanted to put Dazzler on stage while earning the adulation (and dollars) from fans galore. At the same time, she had also gained the attentions of some of her fellow super-heroes, including the Fantastic Four. And so begins yet another Stan Lee presentation, loyal front facers, in the simply spectacular issue titled “The Jewels of Doom!”

We start this titanic tale with a splash page where Alison Blaire, a.k.a. Dazzler, is being barraged by an audio assault (while dressed and accessorized to the nines) from a device which is pushing her powers to their limits. The “deluminizer” continues to fire directly at her, so just how long can she last before buckling? It turns out that the device isn’t a super-villain’s weapon, but a testing mechanism by Reed Richards of the Fantastic Four. While Alison had stopped by the FF’s HQ to pay a social call on Johnny Storm, Reed talked her into being his guinea pig to test the extent of her super powers. She doesn’t need much persuasion, however, since she is desperate to learn how to use and control her mutant ability to transform sound into light. Once the test is complete, however, she burns off a little steam by showing up The Thing and Human Torch (in a long tradition of scenes where new heroes prove how they are not to be taken lightly by their more experienced contemporaries). The sequence where Dazzler darts across the floor on her roller skates, dodging balls of fire and extinguishing Johnny’s flame with a fire extinguisher is pure comics joy.

We get a fair amount of super-hero camaraderie among the group and then learn via the newspaper that the jewels formerly owned by Doctor Doom will be publicly displayed at the United Nations. It’s none of Alison’s concern, so she makes for the offices of Harry Osgood, “Spokesman for the Stars” (her agent). Coincidentally, her next singing gig is for a UNICEF charity event scheduled at the United Nations building in New York City. Despite her financial woes (the charity performance doesn’t pay anything), she reluctantly agrees, and Osgood sends her off with his muscular, flashy and cocky field representative, Mr. Lancelot Steele. Meanwhile, Doctor Doom learns that his former wealth will be displayed for gawking Americans, but this concerns him naught since he is busy plotting to retake the Latvarian monarchy, recently lost to Prince Zorba. Only when he learns that the jewels on display will include the Merlin Stone, an item of great power, Doom’s attention turns exclusively toward New York City!

Thus the stage is set for today’s adventure, but there is an additional twist. Frazen, Prince Zorba’s ambassador to the U.N., is plotting against his liege, and has recruited a team of henchmen to assist in stealing the royal jewels. These thugs don some outlandish costumes on their way to the heist, reasoning that the UNICEF concert will provide the perfect backdrop for the burglary. Their “wild costumes will place the blame… on a gang of punk rockers!”. Mr. Steele busily coordinates hundreds of staff and stooges to get ready for the show, and he makes sure Alison is all set to perform. During the final preparations, however, Steele runs right into the henchmen and gets pummeled for poking his nose where it doesn’t belong. Alison hears him scream and bolts to his aid, tossing her transistor radio into her purse so that there is ample sound to fuel her mutant power. Despite their street toughness and overwhelming numbers, the power of Dazzler is too much for them. She blinds them with blazing light displays and bowls her way through them on her sparkly roller skates! Even though she foils those thugs, Frazen has already made his way to the jewels. However, when he looks into the room where they reside, he finds someone already there waiting for him! 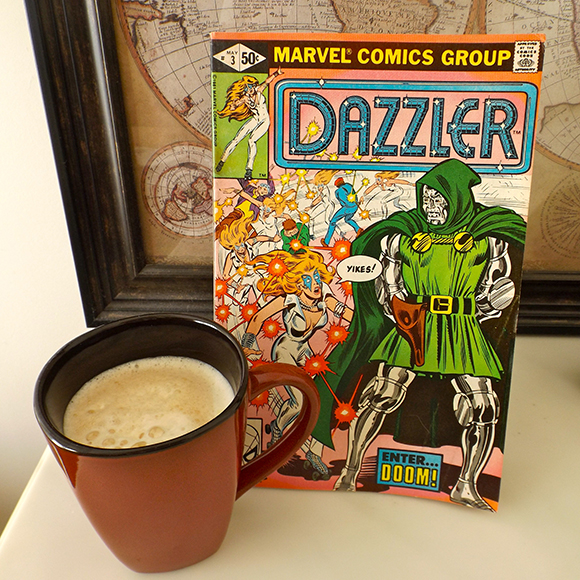 Dazzler makes her way to the display room and faces down the goons guarding the door, neglecting to notify U.N. security and so fighting them on her own. Once she enters the room to foil the robbery, however, she finds herself face to face with none other than the arch-villain, Doctor Doom! He zaps her with a bolt from his armor and then hovers over her, crackling with power flowing from his gauntlets while gloating like a madman, as though he is preparing to obliterate Dazzler from existence! Strangely, Doom then offers Alison a hand up, recognizing her as the vocalist for the evening’s entertainment and wishing her no harm. Although Doom answers to no man (or woman), it “pleases” him to offer her an explanation for his presence. Once she learns that the Merlin Stone he seeks is the key to his plans for global domination, Dazzler tries to foil him by shooting a blinding flash at Doom’s eyes, but his mask protects him from harm. Doom’s gauntlet blasts, however, are far more dangerous and Alison finds it increasingly difficult to dodge them. In one final effort, Dazzler fires all the light she can muster at the royal jewels in their cases, and their brilliance amplifies in all directions, becoming lasers which ricochet right at Doom! His armor absorbs most of the blast and, unfazed, Doom electrically shocks the floor, sending Alison into unconsciousness. With the Merlin Stone now in hand, Doom places Dazzler onto his jet sled and steals off into the night. What nefarious plans does he have for her? Who will perform at the UNICEF charity concert? And how will Johnny Storm ever live down getting doused by that disco dame?

While it’s definitely a benefit to have a talent like John Romita Jr. on the book, you can definitely tell which parts are his and which are Kupperburg’s. Some of the artwork is nice, but it’s far from good on the whole, although the flamboyant outfits and creative demonstrations of Dazzler’s power make the visuals very enjoyable. In addition to her super-heroics and roller-skating talents, Dazzler has developed a significant following in the Marvel Universe. You’ll often see her in conversations involving heroes like Squirrel Girl, Thunderstrike and Shang Chi. Her fans even include Juggernaut and The Incredible Hulk. She has been a member of the X-Men, New Excalibur and SHIELD, and was even endowed with the Power Cosmic on a mission for Galactus! Dazzler has most recently been featured in X-Factor as the biological mother of Shatterstar and in X-Men Battle of the Atom as the first female mutant U.S. President. She’s had a big impact on the Marvel universe-at-large and continues to entertain and amaze her throngs of admirers as one of the most spectacular super-heroes ever created. Fare Thee Well!

Dazzler #3 is written by Tom DeFalco, penciled by John Romita Jr. and Alan Kupperberg, inked by Danny Bulanadi and Armando Gil, colored by Bob Sharen, lettered by Joe Rosen and edited by Louise Jones with a cover by Brent Anderson and Joe Sinnott. Whew! Talk about a team effort!