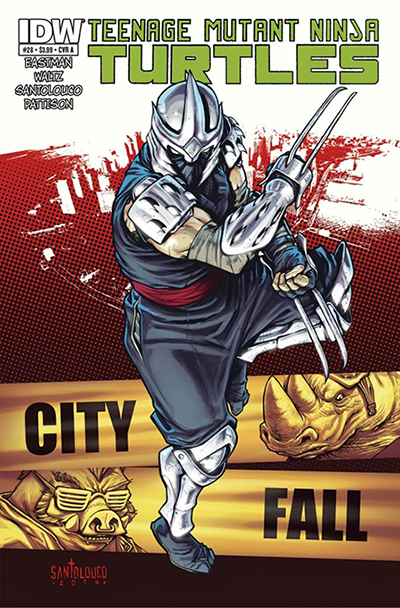 It’s been a fun ride and my entry back into the Turtle-verse, but City Fall has come to a satisfying conclusion! This issue has a little something for everyone, whether it be Raph against Leo, Shredder and Splinter facing off, or clumsy Beebop and Rocksteady making a mess of things. This issue is full of action and excitement, but still manages to bring home that the main theme is family. Through everything that Splinter and his sons have been through in the last 8 issues, you can really see the bond they all share as they stop at nothing to rescue their lost brother, Leo.

During this event, Oroku Saki (Shredder) had kidnapped and brainwashed Leonardo to be his second-in-command and put an end to his ongoing battle with Hamato Yoshi (Splinter). Previous attempts to reason with Leo fail as the remaining Turtles have a hard time keeping it together without their leader. Splinter enlists the aid of outside help as they decide the best plan is an all out assault on the Foot Clan’s area of operation. The addition on Beebop and Rocksteady only add to the confusion as nothing goes according to plan, but with the help of Old Hob and Slash, the Turtles are able to make a getaway with their broken brother and injured Master. It’ll be interesting to see how the brothers deal with the changes in the upcoming 4-part story. Although Leo is back with his brothers, he will have a hard time regaining there trust and there seems there will be a definite change in the status quo.

Mateus Santolouco finishes his art duties strong. I’m hoping that he’s just taking a break and will be back on the book soon. Part of the reason I loved jumping back onto this book after all this time was because of all the personality he put into illustrating each Turtle. I love the way he illustrates movement and the complexity of the fight scenes, I never felt like I got lost in the action. I have been very vocal about my love of Mikey’s shorter bandana tails and the writing and art have revitalized him being my favorite of the bunch.

Overall, I can’t say enough great things about this arc. If you have been missing good Turtle books over the last few years, grew up with the cartoon in the 80s, or are a new fan of the animated series, I implore you to pick up this book. You can start with issue #22 and not feel like you’re missing out on anything and understand what’s going on right away.