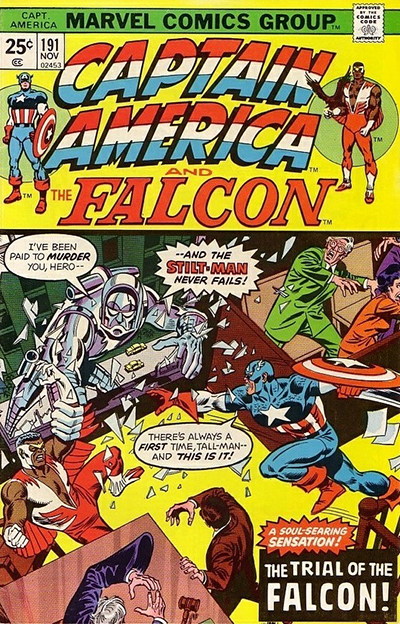 Can justice be color-blind when it comes to super heroes?

How “good” are the good guys who star in our favorite Marvel mags? We all know that Hawkeye started out as a villain before becoming an Avenger. Peter Parker allowed a thief to waltz right by him before he gave up wrestling for crime-fighting. And what about the Sandman, who established himself as a villain, yet made a genuine attempt at transforming himself into a hero? There are often shades of gray in the super-powered community, as proven in books like Thunderbolts and Punisher. The character of a hero may have chinks in its armor, and past deeds can have a way of tearing down the public’s faith in a good man. In this case, it’s the criminal activities of Sam Wilson, aka The Falcon, which threaten to bring his super-hero career crashing down around him. While it’s true that no one – be they Captain America, Thor Odinson or the President of the United States – can claim to be perfect, what happens when somebody who has done such good works, someone we believe is of strong morals, has to be judged for their crimes? Well, true believers, you can bet that in the Mighty Marvel Manner, things won’t always be as they seem, and there shall be twists and turns all along the way!

As we begin today’s awe-inspiring adventure, we begin with a page which implies sheer doom for our hero, The Falcon. Sam Wilson and his partner, Captain America, stand before a judge who is handing down a guilty verdict for “high crimes and misdemeanors, including importation and sale of illegal narcotics”! But this, as the narrator informs us, is the conclusion to our story, which begins days earlier at SHIELD headquarters. Sam Wilson is reeling has he and Cap head down the hallway toward Director Nick Fury’s office, after realizing that he has been living a double life. Where as Sam Wilson, he fights evil as a super-hero, the persona of “Snap Wilson” lived a life of crime six years earlier. Now that Sam has been forced to bring both of these lives into the public eye, he fears what will happen when faced with the judgment of the justice system. In Nick Fury’s absence, Co-Director Jeff Cochren offers an unceremonious greeting to our heroes by ordering SHIELD security to take The Falcon into custody. Sam is quite alarmed, struggling to come to terms with the double life he’s led and the potential consequences, and so he sics his falcon, Redwing, on the guards while he makes his escape. While Sam takes flight through the labyrinth of SHIELD HQ, Cap moves to stop his partner, “if only for his own good!”. Cap’s legendary knack for shield-tossing is brought to bear as he hurls the disc onward, which ricochets off two corners and flattens against Falcon’s back, bringing him down with a great thud!

Everyone is pretty upset at this point. Falcon blames Cap for taking sides against his partner, Cap is mad that Sam won’t allow the justice system to clear his name, and Nick Fury – who just arrived from parts unknown – is angry at everybody, especially Cochren, who has been “lordin’ it like a tin soldier” while Fury was away. First, he has a little sit-down with Cochren, telling him that he’ll be cleaning latrines for the foreseeable future. Second, he orders that Sam’s girlfriend, Leila, be brought to the conference room (Cochren had been holding her for questioning). Sam is shocked that his lady-friend was in custody, and when they are finally reunited, she comments “So we’re together, Falc! Surrounded by honky stormtroopers!”. Despite expecting the worst to happen, she keeps her cool when Cochren presents her with an apology (coerced by Fury, no doubt) before the director orders SHIELD security to “escort the lady home — in style!”. Afterwards, Cap and Fury try to assure Falcon that SHIELD’s best lawyers will make sure he gets a fair shake, but Sam feels the weight of the law upon his shoulders. “I may have been out of it for six years, but Snap Wilson remembers how white courts treat blacks” and “I hear they got the noose up a bit higher for all us basketball-playin’ blacks” are comments which exemplify just how fearful he is of having a fair hearing.

While the world debates his innocence or guilt in the newspapers, television and in the streets, within the bleak underworld of crime, Snap Wilson’s cohorts find the situation intolerable. They fear that he will reveal their names and plans, bringing the long arm of the law right to their doorstep. And so, a “contact” is issued (or do they mean contract?) for the head of Sam “Snap” Wilson – a contact picked up by none other than the Stilt-Man! Eager to prove himself as “the underworld’s number one assassin”, Stilt-Man heads to Los Angeles, where Sam’s trial has just commenced. The prosecutor gets rebuffed in his attempts to sway the jury, and his witnesses bring quite ambiguous testimonies. One shady-looking gent testifies “I used to know Snap. We was buddies — in a manner of speakin”, followed by a police officer who offers “Yessir, that Snap Wilson was a bad sort!”. I’m no attorney, loyal front facers, but those kind of fact-less implications would likely get thrown out of any case I could imagine. Regardless, Falcon – in an attempt at reform – then offers his own testimony about his experiences with the criminal underworld, but suddenly the wall of the high-rise courtroom explodes! Leaning through the opening is none other than the deadly Stilt-Man, shouting “Say your prayers, pigeon! Today is the day you die!” (while a frightened court bailiff shrieks “Sainted Christmas! ‘Tis a giant!”). 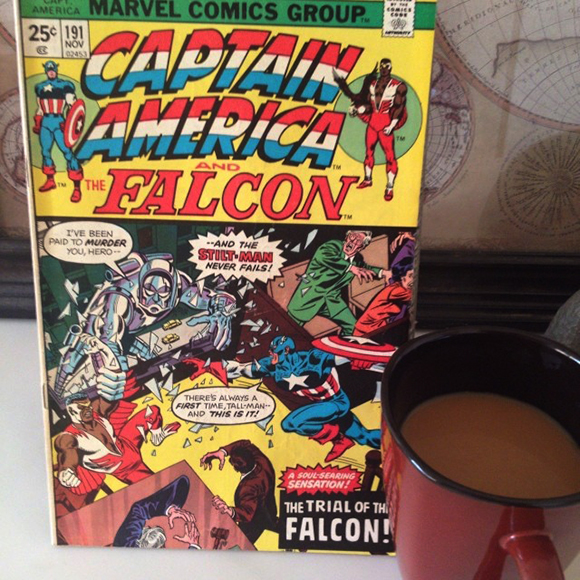 Captain America bolts into action, going toe-to-toe with the Stilt-Man’s assault and taking the brunt of his enemy’s attacks courtesy of weapons stolen from the Trapster. While Cap warns his partner to escape due to his suspicion of the mob’s fatal intentions, Falcon has no plans to duck out on the man who’s loyally stood by his side. The fight continues as the two heroes dodge Stilt-Man’s attacks, deftly evading his blasts while coordinating their efforts for a combined thrust right at Stilt-Man’s chest! Unfortunately, his metal suit deflects their thrust as the two men land unceremoniously on their backs. Just when it appears the assassin is about to finish off his target, down comes Redwing, using his talons to rip at Stilt-Man’s helmet and giving Cap and Falcon time to scale down the Stilt-Man’s legs and onto the street below. Redwing flies off before his enemy can strike back and the trio of targets proceed to flee from Stilt-Man’s giant footsteps lest they get stomped flat! A combination of Cap hurling his shield at Stilt-Man’s helmet and Falcon flying up to rip that helmet from the villain’s head causes Stilt-Man to fly into a rage. Just when he’s about to slam Sam Wilson to the ground, Redwing comes flying in and – without his helmet for protection – the Stilt-Man’s face is easy pickings for the bird’s talons! Falcon lays into his enemy then, dropping haymaker after haymaker on the creep who dared to stick his nose into the halls of justice!

An unconscious Stilt-Man crashes to the ground below and Captain America believes that Sam Wilson has vindicated himself in the eyes of America for the crimes of Snap Wilson. But once court reconvenes, the judge issues a guilty verdict to the shock and surprise of the two heroes. Falcon’s shock is quickly replaced by cynicism, however, remarking that what just occurred was “White justice, Cap! They just don’t see nuthin’!”. However, the judge orders those comments struck from the record, as he concludes his verdict with a suspended sentence and releases Sam on parole with the requirement that he reports each month to his parole officer, Nick Fury, Director of SHIELD! And so ends today’s titanic tale, with an Isabelle and Mantlo story that has brought forth a host of emotions and remained fun from start to finish. The art was rather lackluster, even though Robbins has a clear understanding of human anatomy, it’s just not rendered in an authentic manner. The lack of backgrounds makes the art appear lazy and all the faces of the characters are much the same, be they be man or woman, black or white. However, the cover by Buscema and Giacola makes the packaging of this comic very appealing.

On a side note, dear friends, your humble author just finished viewing the latest episode of Marvel’s Avengers Assemble on Disney XD. While it is probably the single best installment of the series to date (although still not up to par with Avengers: Earth’s Mightiest Heroes), what really stood out was the name “Snap Wilson”. The story takes place in a timeline where Doctor Doom prevents the Avengers from being created in the past, thereby controlling the future under his rule. Several heroes still spring up, however, and one of them is none other than Sam Wilson, going by the name “Snap” Wilson. It’s a nice (and well-timed for this column) tribute to the history of Marvel Comics and it gives ol’ Snap a bit of redemption for his past misdeeds. Until next week, true believers of Marveldom assembled, stay true to yourselves and take to heart the words of Smilin’ Stan: “[Mankind has] the responsibility of treating all who share this wondrous world of ours with tolerance and respect — judging each fellow human on his own merit, regardless of race, creed or color.” Fare Thee Well!

Captain America & The Falcon #191 is plotted by Tony Isabella, scripted by Bill Mantlo, penciled by Frank Robbins, inked by D. Bruce Berry, lettered by Karen Mantlo and colored by Janice Cohen, with a cover by Sal Buscema and Frank Giacola.